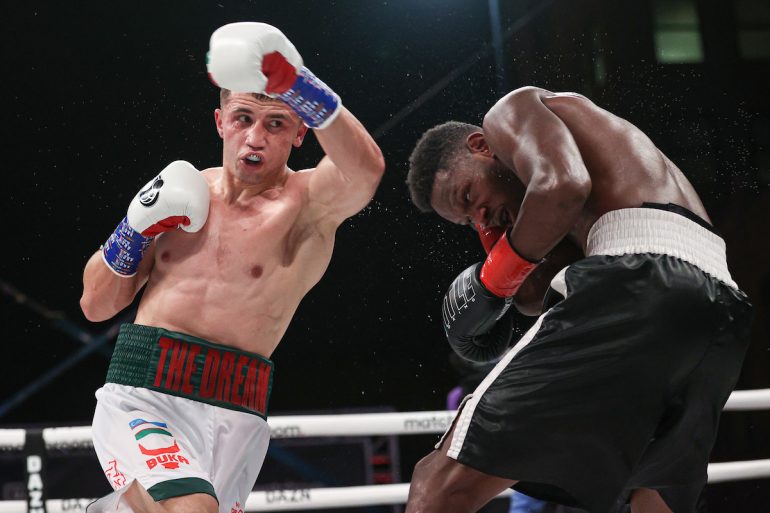 Israil Madrimov fires a left at Eric Walker during their 12-round junior middleweight bout. Photo by Ed Mulholland/Matchroom
15
Aug
by Ryan O'Hara

With the victory, Madrimov (6-0, 5 knockouts), 25, earned a mandatory shot at the WBA junior middleweight title.

Judges David Southerland and Jesse Reyes scored it 116-110 and Karen Holderfield had it 116-111, all for Madrimov, who remained unbeaten in six pro bouts.

Both fighters wasted no time feeling one another out. Walker came out firing and got Madrimov’s attention with a right hand. The rest of the round was closely contested, but Madrimov landed a big right late.

Madrimov shifted his focus to the body in the third round, where he found success. The Uzbek contender connected with a hard straight left to the body from the southpaw stance.

Madrimov continued to slow down the 37-year-old Walker (20-3, 9 KOs) in the fourth frame with a precise body attack. His trainer, the well-respected Joel Diaz, urged his pupil in the corner to use his jab more to set up one-two combinations.

Fatigued continued to be a factor in the fight as Madrimov continued to batter Walker’s body. Again, Diaz urged Madrimov to throw more combinations and to use his jab to set up his punches.

Madrimov hurt Walker with a right cross in the sixth round. He pounded his opponent with hard lefts and rights until they tripped over one another and Madrimov tackled Walker, nearly forcing him out of the ring.

The heavy-handed boxer-puncher in Madrimov also used his incredible fluidity to keep Walker on his toes.

Walker turned the tables on Madrimov in the seventh round, landing with a series of body shots on his adversary, causing him to take a series of deep breaths.

Madrimov drops Walker, but the referee rules no knockdown.

Walker found a second wind in the eighth round, taking it to “The Dream” Madrimov, who had a nightmare of a frame. Walker took the wind out of his sails to the body, before Madrimov tackled him again in a veteran move to gain some much-needed energy.

The ninth round took a controversial turn. Madrimov seemingly knocked out Walker in the ninth round with a massive overhand left, but referee Gary Ritter did not count it because he deemed that Madrimov pushed him down with his shoulder. According to instant replay, that did not take place. Nonetheless, Walker survived after being allocated five minutes to recover.

In the 11th round of their title eliminator, it was all Madrimov, who did all he could to knock Walker out.

It was all guts in the 12th round. Madrimov dropped Walker for his first official knockdown with a right hand. Then both men poured it all on the line to the finish. 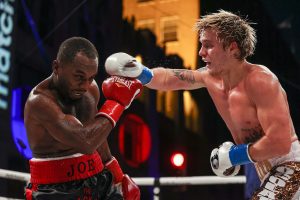 From the onset, it was all Giyasov, who landed almost exclusively to the body in the first round. Campos, who has lost five of his last seven fights, complained multiple times to the referee of low blows, but it appeared to land above the beltline.

Giyasov connected with a series of left and right hooks to the head in round two. He followed up with a hard right hand that knocked Campos back and a short left hook. At this point in the action, it appeared Campos saw the writing on the wall.

Giyasov continued to pound Campos in the third round. He landed with a thudding left hook to the body that could be heard in Kansas. After taking a series of lefts and rights against the ropes, Campos briefly smiled at Giyasov. But he didn’t smile for long.

At the end of the round, Giyasov countered Campos with a left uppercut to the liver, and he crumbled to the canvas.

“I’ll be honest, I felt his liver by my knuckles (when I landed the left hand), and I didn’t expect him to get up,” Giyasov said through an interpreter.

Giyasov, who captured a silver medal at the 2016 Olympics in Rio de Janeiro, added that he is ready for a title.

In a scheduled six-round affair, middleweight Nikita Ababiy remained undefeated with a unanimous decision over a game Jarvis Williams.

Judges David Southerland and Karen Holderfield scored the fight 59-55, while Henry Ellick had it slightly tighter at 58-56, all for Ababiy.

Williams tested Ababiy right out the gate by landing a left hook to the head that clearly got his attention. Ababiy came back later in the round with a right hand and a left hook downstairs.

Ababiy, who has been inactive since winning via first-round disqualification over Jonathan Batista last November, rocked Williams’ head back in the second round with a sharp right connect. He followed up with crisp left and right uppercuts to the body.

Late in the third round, Ababiy landed with a hard right uppercut to the body. The body punches proved to take a toll on Williams, whose punch output had fallen dramatically.

Ababiy dominated much of the fourth round. He used his jab effectively from the outside to limit Williams’ counter opportunities, then went downstairs to the body with a left hook. However, Williams got his attention late in the frame with a left hand that knocked Ababiy back.

The fifth round was closely contested. Ababiy was warned early for a low blow, and Williams connected with a solid right hand.

Williams suffered a bad cut over his right eye in the sixth round but was able to weather the storm against Ababiy, who connected with a series of hard right hands but was unable to get his opponent out of there.

The 21-year-old Ababiy improved to 9-0 with six knockouts. Williams dropped to 8-3-1 with one knockout.