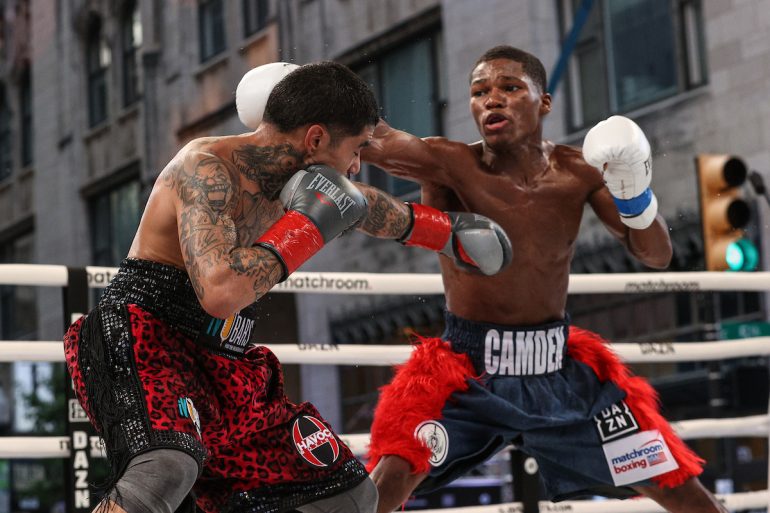 Raymond Ford lands a jab on Eric Manriquez during their bout on the Matchroom boxing fight card on August 15, 2020 in Tulsa, Oklahoma. Photo by Ed Mulholland/Matchroom
15
Aug
by Ryan O'Hara

Ford, who improved to 6-0 with two knockouts, floored Manriquez in the third round en route to the unanimous decision win.

Judge Gerald Ritter scored the fight 59-54, while Henry Ellick Jesse Reyes each saw it 60-53, all for Ford.

In the first round, the southpaw Ford knocked Manriquez backed into the ropes with a left hand. 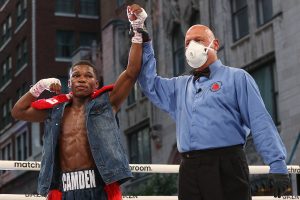 Ford was in control in the second round, but Manriquez managed to sneak in a counter right that got his attention.

Ford connected with a sharp right hook that dropped Manriquez in the third round. He went for the knockout but was unable to finish the job, as Manriquez, who appeared more frustrated than hurt.

The best punch of the night for Manriquez came in the fourth round when he switched to the southpaw stance and smacked Ford with a left hand. Ford recovered quickly and went back to using his jab and lining up his opponent for the straight left hand.

“It wasn’t my best performance,” Ford admitted. “I know I could have done a lot better. It took a while for me to warm up. It is what it is.”

Manriquez picked up the pace in the fifth round, but he had a hard time connecting on Ford, who circled around the ring, never allowing himself to be an easy target.

Manriquez swung wildly with a left hand in the sixth round and missed terribly, stumbling into the ropes. The remainder of the action was dictated by Ford, who used his jab from the outside and cruised for a comfortable victory.