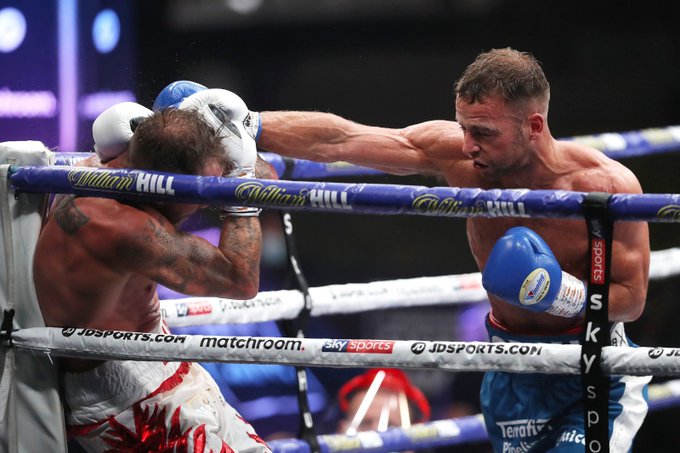 Cash looked fast and sharp in the opening exchanges, but he was caught by a left hook in the first as an indicator that Welborn wasn’t at Matchroom Square Garden to make up the numbers.

Cash set about the body in round three and was warned for straying low. Welborn responded with an aggressive burst with Cash on the ropes, but he was finding Felix a hard target.

Cash continued to work downstairs in the fourth though the two clashed heads near the bell to close the round and Welborn definitely felt that.

The champion had a point deducted in the fifth for going low again, but that didn’t stop him from aiming at the body. In fact, he worked hard downstairs and got the upper hand with a series of rights to the body and then the head that forced Welborn to crumple to his knees where he heard the count reach ‘nine.’

Another right moments later put Welborn over once more and his corner threw in the towel. They’d seen enough at 2:48 of the fifth round.

Welborn (24-9, 7 knockouts) lost his third in a row after defeats to Jarrett Hurd and James Metcalf.

“It was a decent performance,” said Cash. “I was hurting him and breaking him down and it was a matter of time.”

Earlier in the night, Zelfa ‘Brown Flash’ Barrett stopped Eric Donovan in the eighth round, halting the Irishman with a booming left hook.