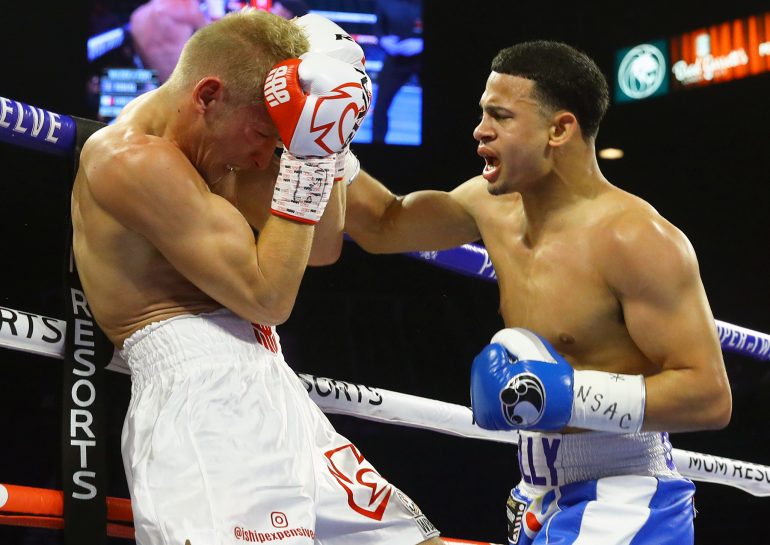 Romero on his way to stopping Arturs Ahmetovs on the Wilder-Fury 2 undercard.
13
Aug
by Francisco Salazar

Already an accomplished judo wrestler who used the sport to stay away from gangs in his hometown of North Las Vegas, Nevada, Rolando just wanted to please his father by give boxing a try.

From lacing up the gloves for the first time at 16 age to signing with Mayweather Promotions a few years later, listening to his father’s advice to try boxing may have been the best decision he’s made yet. A victory over another unbeaten fighter Saturday night could put Romero in contender status at 135 pounds.

Romero will face Jackson Marinez of the Dominican Republic at the Mohegan Sun Casino in Uncasville, Connecticut. The 12-round bout will precede the main event bout between WBC super middleweight titleholder David Benavidez and Roamer Angulo.

Both fights, along with the heavyweight bout between Travis Kauffman and Otto Wallin, will air live on Showtime (9 p.m. ET/ 6 p.m. PT).

Romero (11-0, 10 knockouts) last fought on February 22, battering previously-unbeaten Arturs Ahmetovs before stopping him in round 2. Romero made his Showtime debut on a ’ShoBox’ telecast on November 1, dropping Juan Carlos Cordones of the Dominican Republic twice before winning by knockout in the opening round.

The 24-year-old will face the toughest test thus far in his pro career when he faces Marinez (19-0, 7 KOs), who is coming off a second round knockout victory over Mexico’s Yardley Armenta Cruz on December 29. Despite Marinez having almost twice as many pro fights, Romero is confident he will be victorious Saturday night.

“I know he has a good record, but he knows what’s going to happen when we fight,” Romero told The Ring over the phone last week. “No one is doubting me winning this fight.”

“I hear critics saying that I’m not fast, which I don’t understand. I’m fast and very accurate with my combinations. I don’t miss when I throw a punch or combination. If you look at my fights, I hit where I want my punch to land. I’ve yet to lose a round so far. When it comes to defense, a fighter may land once, but he’s not going to hit me again with the same punch.”

Romero’s father, Rolando Sr., was born and raised in Cuba, where he was an accomplished fighter in the country’s storied amateur program, becoming a three-time national champion. He later defected from the communist country in 1993, arriving to Miami, Florida, where his brother resided.

After settling in North Las Vegas, Rolando Jr. was born two years later. Despite finding success in judo along with his sister, who was a former seven-time national champion, Romero gave in to his father’s insistence on giving boxing a try. He began training at Johnny Tocco’s Gym in Las Vegas at age 16 and began his amateur career two years later.

“My Dad was a puncher and I’m a puncher,” said Romero, who turned pro two months after his 21st birthday in December 2016 and goes by the nickname ‘Rolly’. “I box in my own way and the genetics of power from my Dad made me box the way I do. I don’t imitate anyone. It’s just like Mike Tyson. He had his own style. People couldn’t imitate Tyson. I don’t think anyone will try and imitate me.”

Prior to turning pro, Romero decided to train at the Mayweather Gym. After reportedly hurt or dominating sparring partners, Floyd Mayweather took an interest to Romero, who personally offered him a promotional contract, which Romero accepted. Lately, Mayweather has returned to the gym to train and work with Romero, as seen in videos on Twitter or Instagram.

“I listen to everything Floyd says to me. He’s told me to work on my jab. That was four-five fights ago. Here’s someone with the best jab in boxing and he’s telling me to work on that. So I’ve been working on that. When it comes to boxing, Floyd is the best and I’m going to listen to any advice or things he teaches me.”

Romero’s quick ascension as a pro thus far has raised questions, as long as he continues winning, on when he would face the elite or world titleholders in the division.

Romero believes he is the best fighter at 135 pounds, and is confident of defeating fellowunbeaten Ryan Garcia, who will face Luke Campbell later this year. Romero and Garcia sparred a few years ago in Las Vegas.

“Beating Ryan Garcia is not a challenge. I know I would dominate the 135-pound division. I have the speed and power. If Ryan were to fight (WBC lightweight titleholder and fellow Las Vegas resident) Devin (Haney), I’d favor him to beat Devin. They’re just as fast and Ryan is a little taller, but I think Ryan lands that one punch to hurt and knock him out.”

Romero is confident of a win over Marinez Saturday night and a long-reign in the division before moving up in weight to fight at the higher weight classes. He believes he can leave a legacy in the sport few could match.

“I want to win world title belts in multiple divisions and retire undefeated. I don’t want to box forever. I would like to retire at the age of 32. Bank my money, not bank losing my brain cells. I want to dominate at 135 pounds, 140 pounds, and later 147 pounds. I can’t be pound-for-pound the greatest because how can I prove to be pound-for-pound the best when fighters from the past can’t fight each other? Floyd, ‘Sugar’ Ray Robinson. Ray Leonard. Roberto Duran.”