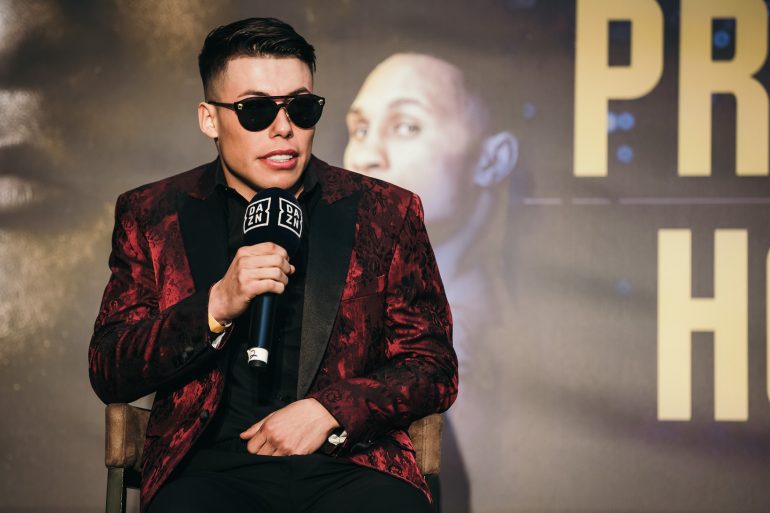 Castro looked sharp and sounded confident but humble when Matchroom announced his signing in Texas.
13
Aug
by Michael Woods

Saturday was to be a joyous day, the official start of what Marc Castro humbly expected to be an excellent run as a professional pugilist.

The California boxer in a 25 minute phone conversation touched on his origins (he grew up in the projects in Fresno), his amateur accomplishments (he was 177-7 in the ams), why he chose to sign with advisor Keith Connollly and promoter Eddie Hearn (he liked Connolly’s openness and thinks Hearn is an ace) and why he was feeling a bit eomotional (his mom wouldn’t be there ringside in Oklahoma, and he’ll be psyched to get back home and indulge in her home cooking).

The subject of the coronavirus came up, in the context of how the 20 year old dealt with training during the shutdown. “I was tested before I left (for Oklahoma) and yesterday (Wednesday),” Castro told me. The test back home had him good to go, but the COVID test taken Wednesday put a halt to Castro’s momentum, for now.

“Marc Castro’s pro debut has been cancelled after the fighter and his father-trainer Tony tested positive for COVID-19,” read the release sent out by Matchroom, the promotional entity headed by Hearn.

The Castros are under quarantine, and isolated from other people involved in the show, which will screen on the OTT platform DAZN.

“Marc and his father will now be under strict quarantine, and plans are being made to ensure the safety of everyone still involved in the event, as well as to not expose the community and contribute to this already devastating pandemic. While it is upsetting news for all concerned, I believe the strict protocols that we have put in place – ensuring a negative test prior to travel to Tulsa, quarantine upon arrival to the hotel, then tested once again – have proven to be effective. Furthermore, social distancing, religious use of masks, and the sanitary practices we have put in place have also proved that such basic practices do work in preventing the spread of COVID-19.”

“What can I say, we won the race to sign the one!” said Hearn when the Castro signing was made official. “Marc Castro is widely regarded as an absolute stud of the amateur game, an unbelievable fighter with superstar potential in the pro game. This young man is going to capture the hearts of American and Mexican fight fans and go all the way to the very top!”

? Introducing stellar amateur standout @MarcTheBoxer ahead of his pro debut on #BraekhusMcCaskill ?

The start of the process will now be delayed.

Castro would have enjoyed a sweet spot in his debut. His bout against 2-3 Raoul Corona (not a typo), would unfold right before the main event pitting Cecilia Brækhus (36-0 9 KOs) against Jessica McCaskill (8-2 3 KOs) in the downtown Tulsa streets.

He told me that the testing protocol had been strict, that he couldn’t see his dad, and do training, until they got the all-clear sign after a COVID test in Oklahoma. 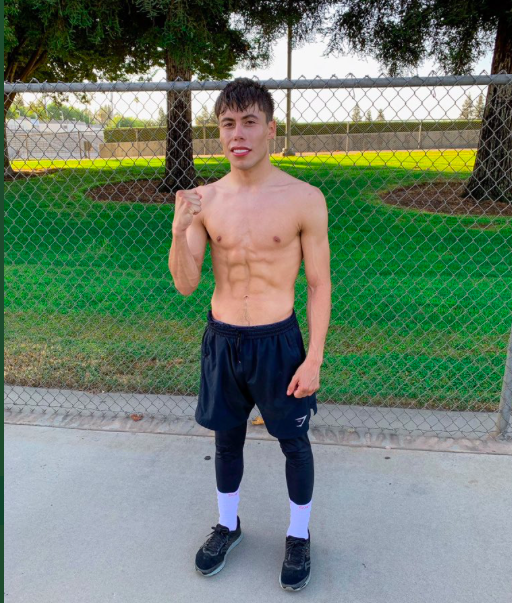 Castro posted this pic to his Twitter, before he flew out to Oklahoma. His enthusiasm has been momentarily dimmed, but he’s used to facing stern challenges.

That the COVID test would come in negative, that was the assumption while Castro spoke on what he wanted to communicate in his debut.

“I want to be an inspiration,” he said. “That if you work hard, you can get to where you want to be. This should be a testament to the sacrifice my whole family has made for me to get here.”

It seemed clear to me this is a good kid. He said he craved the tacos his mom makes, and that his grandma turns 89 on August 19th, the same date as his birthday. “I can’t wait to get home, I miss my family, we’re real close,” he said.

Adapating successfully emerged as a main theme of our chat. Sisters Roxanne and Jasmine and twin sis Esmerelda all appreciated the watchful eyes of dad Tony and mom Lorena, who made sure that the kids didn’t get ensnared in any neighborhood dramas.