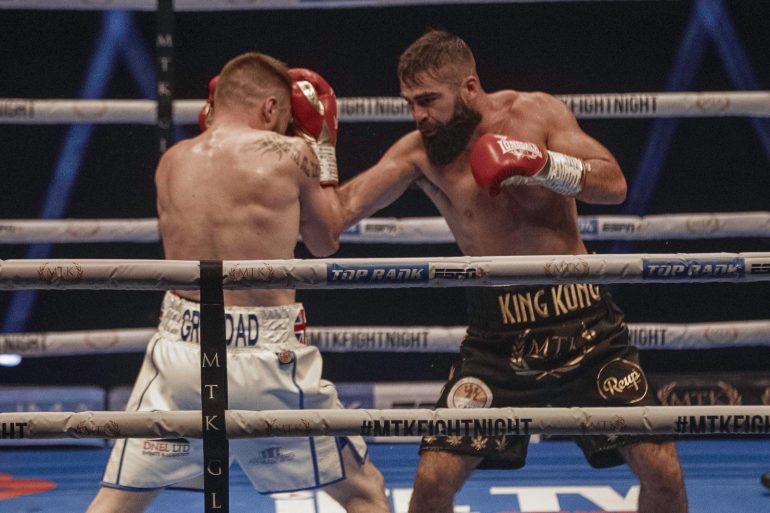 Carroll, who was coming off a career best win over Scott Quigg in March, looked flat throughout the fight but credit must be given to the hard-luck Hughes who finally won the big one and puts himself in position for another big opportunity. It’s a tough loss for Carroll who will have to go back to the drawing board and rebuild.

“I knew deep down I had it and tonight I managed to pull it off and there was no belt on the line,” said Hughes. “Jono is world-class, he brought the best out in me. He’s gracious in defeat, he’s a humble kid.

“Whatever comes my way, I’m 30 now, I always said I’d pack in when I’m 30 but I seem to be getting better. I keep myself in good nick. I thought I pulled a good win out. Not calling nobody out, unless [Floyd] Mayweather [Jr.] wants to come out of retirement to give the fans the fight they want to see.”

Carroll was clearly surprised by his opponent.

“It was a great fight, it was very competitive,” said Carroll. “Maxi’s range is better than I thought, I never got my range tonight, I felt a bit sluggish on my feet. There’s a few little things that have gone wrong but I’m not one to give excuses. I’ll take it and come back stronger.

“No offense but I think I have better boxer ability in most departments [than Hughes]. Maybe I overlooked Maxi. I just couldn’t find my rhythm.”

Belfast junior welterweight Sean McComb overcame an early cut in the third round to best Siar Ozgul by 10-round unanimous decision. The 27-year-old put on a disciplined display boxing behind and educated jab to win 99-92, 97-93 and 97-93 on the scorecards.

“I felt good and very fortunate to be out after the lockdown,” said McComb. “I took the positives from it and did a 10-week camp.”

McComb said he would be happy to drop to 135 pounds and face the likes of recently crowned British champion James Tennyson or revive the previously postponed fight with Craig Evans.

Craig McIntyre 12-0-1 (5 KOs) dropped Ishmael Ellis 11-3 in the fourth round before stopping the Birmingham battler in the fifth round in their junior welterweight bout.