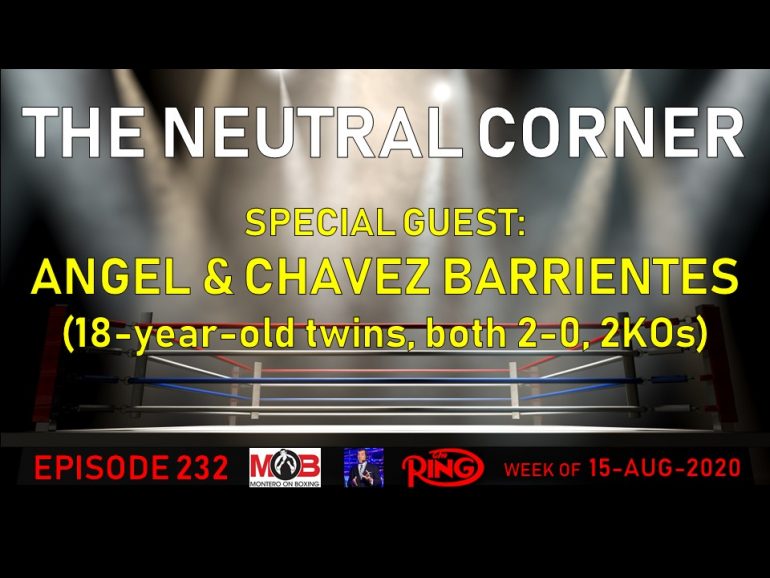 On episode 232 of The Neutral Corner boxing podcast, host Michael Montero was joined by Angel and Chavez Barrientes. The twins from Las Vegas by way of Hawaii turned pro last year at the age of 17. Now, having recently turned 18 years old and graduating high school, they’re ready to take on the boxing world.

“We’re working with PBC,” Chavez told The Ring. “We’re not officially signed yet, but we will be soon.”

“We’ll have a fight coming up later this month. I’m pretty sure it will be in LA but nothing is official yet; it’s going to be in the USA for sure.”

Both Barrientes brothers are 2-0 (2 knockouts), with their first two professional bouts occurring in Tijuana, Mexico. They’ve been boxing since their father took them to a gym when they were just seven years of age.

“Our dad has been around the boxing game for a long time,” said Chavez. “I was actually named after Julio Cesar Chavez”.

“Our dad has always been a fan of boxing,” said Angel. “When we were young, he took us to a couple classes. Sooner or later he opened his own gym, Pound for Pound Boxing, located in Las Vegas. He’s had it for about 10 years and still runs it today.”

The product of a Mexican father and a Filipina mother, the Barrientes boys feel their diverse background will help them appeal to a broader fan base. “Even our Hawaiian side too, “said Angel, “we’re Mexican and Filipino and we were born in Hawaii. We rep all sides of our cultures.”

After the interview, Montero reviewed the exciting draw between Terri Harper and Natasha Jonas, as well as victories by Jamal James and David Morrell in Los Angeles.

Montero also previewed the upcoming schedule for this week. Matchroom USA returns to action in Tulsa, Oklahoma, while PBC on Showtime will broadcast a tripleheader from Connecticut, both this Saturday night. The cards feature young talent like Israil Madrimov, Shakhram Giyasov and David Benavidez.

Jack from Indiana is eagerly anticipating the upcoming Charlo-Derevyanchenko fight, and he favors the Ukrainian. “I cannot wait for that fight,” he said. “I’m leaning toward Derevyanchenko, I find it hard to believe that Charlo could knock him out. But I can see Sergiy stopping him to the body.”

@19:30 interview with the Barrientes twins

@42:26 preview of Matchroom USA card from Tulsa, OK and PBC on Showtime from CT