Andrew Cancio to face Saul Rodriguez on September 12 on ESPN 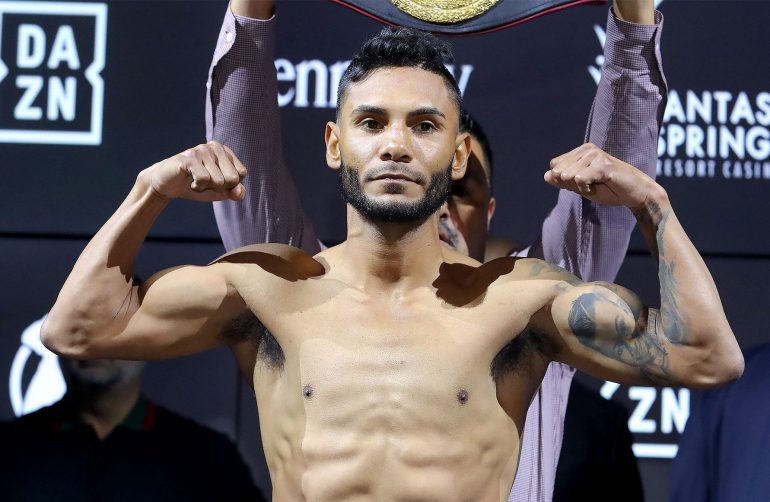 The 10-round bout will take place at the MGM Grand Conference Center in Las Vegas, Nevada, and will air live on a ‘Top Rank on ESPN’ telecast.

“The fight will be contracted at 130 pounds plus one,” Chaparro told The Ring. “It’s a good fight for Andrew.”

Cancio (21-5-2, 16 knockouts) was scheduled to fight Tyler McCreary on April 25 in his first fight under contract with Top Rank, but the fight was postponed due to the COVID-19 pandemic. He was penciled-in to fight Cesar Valenzuela on July 21 in Las Vegas, but the Nevada Athletic Commission reportedly did not approve the fight.

Cancio, 31, was recently promoted at the Southern California Gas Company, where he works full-time. The promotion forced Cancio to make a few changes in his personal life.

“When he was promoted, he was transferred to Palm Desert (California),” said Chaparro. “So, he works as a surveyor for the Southern California Gas Company, leading a crew in there. He just bought a home in (nearby) La Quinta.”

Cancio had lived and trained in Ventura, where he worked with trainer Joseph “Hoss” Janik. He split from Janik in May and began working with Joe Goossen.

“So, he had to stop working with Goossen because it would’ve been impossible for Andrew to drive from Palm Desert to Van Nuys (a suburb of Los Angeles) five days a week,” Chaparro said. “So, it was unfortunate, but Andrew stopped working with Joe.”

Enter trainers Joel Diaz and Marcos Caballero, who are based in nearby Indio. Caballero is currently training Cancio, while Diaz is out of the area in respective “bubbles” for upcoming fight cards this Saturday in Los Angeles and August 15 in Oklahoma City.

Cancio, who is ranked No. 7 by The Ring, has not fought since being stopped by contender Rene Alvarado after round seven on November 23.

Rodriguez, who resides in Riverside, California, last fought on February 28, dropping journeyman Josh Ross multiple times before stopping him in round five. It was the first fight for Rodriguez (24-1-1, 18 KOs) in eight months after losing by knockout to Mexico’s Miguel Angel Gonzalez.