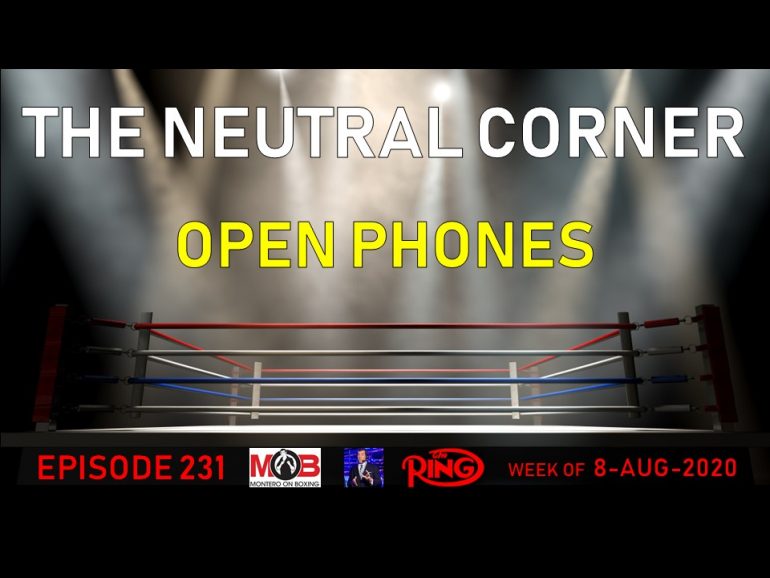 On episode 231 of The Neutral Corner boxing podcast, host Michael Montero engaged in a detailed, nuanced discussion about the recent firing of Showtime Boxing commentator Paulie Malignaggi with callers from around the world.

The former two-division titleholder, who had worked as a Showtime analyst since 2012, was released from the network last week for refusing to apologize about controversial comments he made during an interview with iFL TV in April. During the interview, Malignaggi was asked about racially-charged comments Devin Haney had made while speaking with a YouTuber earlier that month.

Malignaggi’s response hit on the changing demographic trends of the sport, most notably the recent rise of Eastern-European Caucasian fighters on the global scene. But Paulie went further, opining that he did not “believe there is any racial oppression today”. Although there was little reaction to those comments at the time, fast-forward to the firing last week and there was a sudden explosion of outrage from many in the fight media.

In other news, it was reported that Teofimo Lopez turned down an offer of $1.2 million from promoter Top Rank to face Vasiliy Lomachenko in a lightweight unification bout this fall. Also, the welterweight showdown between Errol Spence and Danny Garcia was officially announced by the fighters on their social media. The fight will take place on Fox PPV and marks Spence’s return to the ring from his nearly fatal car accident last fall.

Montero also reviewed wins by Srisaket Sor Rungvisai in Thailand, Ted Cheeseman in England (broadcast on DAZN) and a title-claiming victory for Angelo Leo in the USA (Showtime). Lastly, Montero previewed this week’s action, including a PBC on Fox card from Los Angeles. The main even is a welterweight fight between Jamal James and Thomas Dulorme.

Scott had some strong opinions about Malignaggi’s firing, and believes there is more to it than what’s being reported. “Paulie was fired because he told the truth about PBC fighters, specifically Deontay Wilder. During the first Luis Ortiz bout (in March 2018), after the seventh round when Ortiz rocked Wilder, the ring doctor came over and examined him. Paulie said, “you can’t do that, what’s going on here?”. He was just incredulous to what he was seeing, while everyone else was silent.”

Arthif Daniel (17-3, 5 KOs), a professional fighter from England, has known Malignaggi for years and defended his friend. “I’ve known Paulie for almost ten years now. One of the things that’s really frustrated me is the comments on social media calling him racist. Paulie has a track record of helping people of different backgrounds than him; there are so many boxers he’s helped.”

Dan from New Jersey said, “it’s clear to me that his intentions (in the iFL TV interview) were good. He was trying to say that we’ve all been there. And it’s a positive thing for African-Americans, that they’re moving up the socioeconomic ladder, and now the Eastern-Europeans are the lower economic group, and they’re starting to ascend in boxing to work their way out of poverty.”

Rob Palmer from Los Angeles added, “it was the racial oppression comments that were the final straw. At the time I thought that was an ignorant thing to say and I still do. He was working for Showtime/CBS and that’s a major corporation. And saying that kind of thing just does not fly in that world.”

TIME STAMPS:
@5:15 Lopez turns down $1.2M offer to fight Lomachenko
@10:08 Spence vs Garcia officially announced
@16:06 thoughts on Paulie Malignaggi getting fired (NOTE: there were several listeners who called in to speak on this story)
@1:45:56 fight review and preview