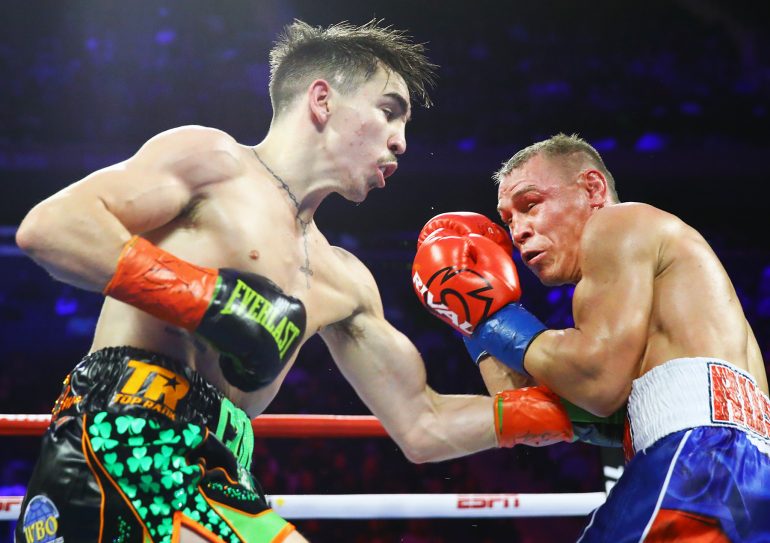 Michael Conlan has tried to make the most of the downtime brought on by the COVID-19 pandemic.

Speaking to The Ring in recent days from London, Conlan insists that the crisis has allowed him to see the bigger picture.

“The extended break actually did a lot of good for me,” Conlan said. “I learned that you can’t take life too seriously. There are bigger problems in the world that are out of our control. But there are things we can control, and that’s time spent with our loved ones.”

Conlan, who is married with two young children, picked up a new skill during lockdown. The 28-year-old learned how to bake and even perfected his own banana bread.

“I have come out of this a better person,” he admitted. “I am the happiest that I have ever been in my life, but I am also in the best shape of my life, both mentally and physically.”

If you count his amateur career, Michael Conlan has entered the ring an incredible 275 times. But he hinted that fight number 276 is extremely important.

Conlan (13-0, 7 knockouts), of Belfast, Northern Ireland, returns to the ring on August 15 on the undercard of a Top Rank on ESPN card to face former 126-pound title challenger Sofiane Takoucht.

COVID-19 relegated Conlan from the gym to a strict garage routine, but he insists that the transition has not left a concavity on his preparation.

“It’s a very exciting fight for me. Takoucht, he’s a very experienced French warrior and veteran,” Conlan told The Ring. “He has been there with some tough fighters, been in a title fight, and he has as many stoppages as I have pro fights. I’ve been looking forward to this fight for a while, and I am in the best shape of my life.”

Former two-division titleholder Carl Frampton will headline the card as he takes on Vahram Vardanyan in a 10-round bout contested at the junior lightweight limit of 130 pounds at the BT Sport Studio in East London.

The 34-year-old Takoucht (35-4, 13 KOs) won eight fights in a row before his streak was snapped by the undefeated IBF featherweight titleholder and Ring Magazine No. 1 at 126 pounds, Josh Warrington, who stopped him in two rounds last October.

In his last fight, Conlan avenged a heavily-disputed 2016 Olympic Games defeat to Vladimir Nikitin with a one-sided victory over 10 rounds at Madison Square Garden.

“I have always known that I have to give everything I have to make things happen in boxing. I’ll admit, sometimes I gave it 90 percent or so,” Conlan admitted. “But in that fight, I showed a renewed focus, and that I still have a lot to give in boxing.

“I’m really looking forward to this fight with Takoucht. If I am honest, I believe I can become a unified world champion. I want to win (belts) in three different weight divisions. I give this sport everything. I give it my all, and I have to get out there and perform at the highest level.”

“My brother was the reason I started fighting. If it weren’t for him, I don’t think I would have ever put on gloves,” Conlan stated. “He has always been the guy that I have looked up to, and he has inspired me to do good things with my life.”