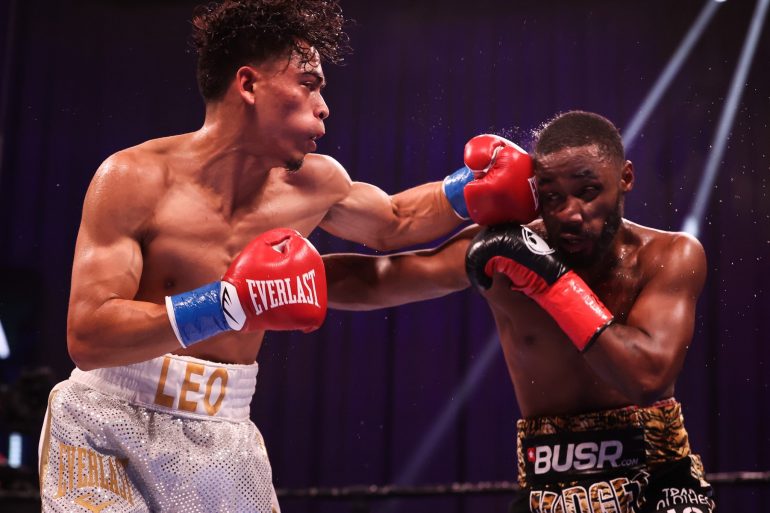 From sleeping in his car to title glory.

Angelo Leo got off to a bit of a slow start against Tramaine Williams, but took complete control in the fourth round, battering his opponent to the body from pillar to post to win the vacant WBO junior featherweight title by unanimous decision Saturday at Mohegan Sun Arena in Uncasville, Connecticut.

Two judges scored it 118-110, while the third had it 117-111, all for the 26-year-old Leo (20-0, 9 knockouts), who becomes the fourth fighter from from Albuquerque, New Mexico to win a belt. He joins former two-division titlists Danny Romero and the late Johnny Tapia, as well as ex-welterweight champ Holly Holm.

The Showtime main event kicked off at a feverish pace as both fighters looked to land first. The best punch of the round went to Williams, who cracked Leo with a counter straight left hand.

Leo struggled to connect with his left hook in the second round. Williams found success to the body as he landed with a left uppercut. Then the action shifted to the center of the ring, as “The Mighty Midget” proved his superiority behind an authoritative jab, which knocked Leo back.

Leo marched forward with abandon to start the third round, but Williams met him halfway, jamming a counter left hand to his nose. That did not discourage Leo from trying, though.

With less than a minute remaining in the round, the southpaw Williams stood in the pocket, snapping Leo’s head back with a stiff counter left hand.

Leo turned southpaw to try and confuse Williams to start the fourth frame, coming out with a sense of urgency. But Williams stayed calm and composed, boxing off his backfoot, and countering with his jab.

With 1:25 left in the round, Leo connected with his long left jab but offered nothing behind it. With about :55 remaining, Williams connected with a one-two combination. But Leo came on strong, landing a flurry of shots to the body of Williams, and did some more shoe-shining work on the inside. He finished the round a right hand on a defenseless Williams.

It was a closely contested fifth round. Williams landed a series of jabs. But Leo purposefully landed jabs to the arms and the shoulders in an attempt to tire out his opponent. With :32 left, Williams landed a solid one-two combination.

The bout shifted to an inside battle in the sixth round. Both combatants exchanged shots, but Williams got the better of Leo with a left hook to the body and a short left hook upstairs. But Leo landed with his own series of left hooks downstairs.

“The key factor was the bodywork and (sustained) pressure,” Leo said after the fight.

With 1:04 remaining in the round, Leo drilled Williams with a low blow. Referee Harvey Dock immediately called time and warned Leo twice to keep his hands up. Williams took about a minute to recover before action was resumed. Leo then finished the round strong, connecting with left-right combos to the body, and landed with a quick left hook to the head.

The offensive edge went to Leo in the seventh round, as he kept Williams inside his kitchen. He blasted him to the body with left after left, right after right, as the fight got closer on the cards.

Williams’ head trainer Brian Clark said in the corner: “Those body shots are too much for you, alright? We have worked too many years for this shit. Stick to the outside.”

Williams (19-1, 6 KOs), 27, of nearby New Haven, Connecticut, who just two years ago was in a prison cell serving time for drugs and weapons charges, saw his undefeated record evanesce into thin air.

In the eighth round, he attempted to follow his coach’s instructions, but Leo did not allow him to, encumbering his movement with a fierce body attack. Late in the frame, Williams had more success landing with his right jab as Leo seemed to take the rest of the round off.

With 1:05 left in round 9, Leo connected with a stiff right hand as Williams was in a position to try and counter off the ropes.

Leo’s blistering work rate was personified in the 10th round as he roughed up Williams on the inside with 25 seconds left, Williams caught Leo with an uppercut below the belt, which earned him a warning from Dock. However, Leo did not require much time to recover and continued to show his dominance over Williams.

Leo was initially slated to face fellow unbeaten 122-pounder Stephen Fulton Jr. for the vacant title, but the latter was sidelined with COVID-19 and was forced to withdraw. 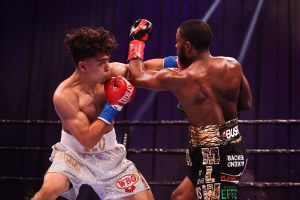 “I was a little disappointed, but then I was like, ‘This is what I came here to do,’ (win) a world title and that’s exactly what I did.

“Just be ready,” referring to Fulton. “We’re going to make it a war. The fans want it. Why not bring it on?

According to an announcement made by the WBO, Fulton (18-0, 8 KOs), 26, of Philadelphia, will face Leo within the next six months.

Williams also had to make adjustments of his own, as he was originally supposed to face Raeese Aleem in a WBA title eliminator. Aleem ended up knocking out Marcus Bates in 10 rounds to win his encounter.

It was more of the same in the 11th as Leo walked down Williams. While bouncing on his toes, he connected with a left-right combo to the body. With :59 left, he landed a three-punch combination.

With around 45 seconds remaining, Williams, a southpaw, landed a right uppercut, but it didn’t land clean. But a short time later, he landed a left-right combo, and a counter left hand. But as the fight marched into the 12th and final round, it was evident that Williams needed a knockout.

Both fighters had never seen the 12th round in their career, but that changed on Saturday.

What didn’t change was who in control of the action. Prior to the bout, four of Leo’s last seven opponents were left-handed.

“Boxing is the ultimate truth teller,” he continued. “I showed my mental fortitude, how tough I am in there, and how I can adapt.”

Leo connected with a sharp left uppercut about 45 seconds into the round. Then he guided Williams into the ropes and lunged forward with a straight right hand, and battered him to the body. Dock warned Williams once more for a low blow.

But it was all Leo, who scored a clear and convincing victory to win his first title.