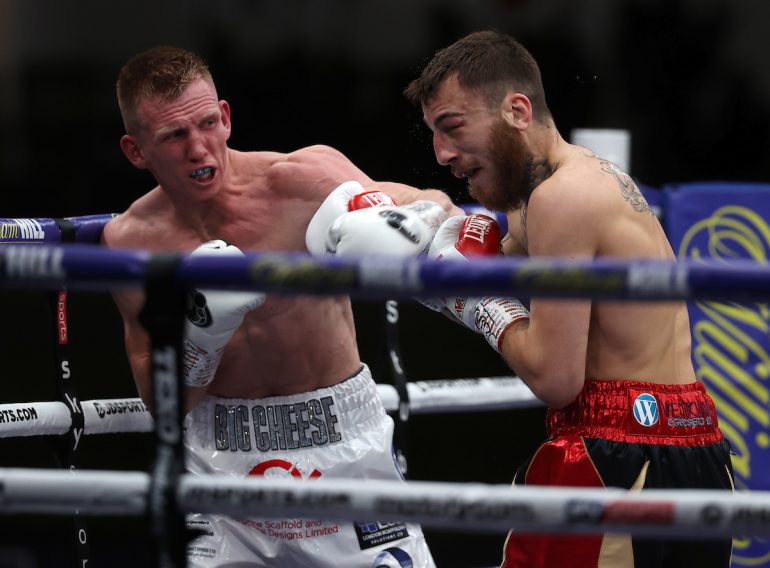 In an all-British junior middleweight showdown, Ted Cheeseman claimed a hard-fought 12-round unanimous decision over countryman Sam Eggington at Matchroom HQ in Brentwood, Essex on Saturday. The official scores were 116-113, 116-113 and 115-114.

“I’m a winner and I love winning,” said Cheeseman in an emotional post-fight interview with Sky Sports in the U.K. “I give my heart and soul to the sport. Sam is a great fighter, he’s had a lot of tough fights. When it got tough in there I stood and fought it out with Sam.

“I made a few mistakes, but I boxed really well considering I’m coming off two losses and a draw.”

Cheeseman (16-2-1, 9 knockouts) got off to a good start in what was a fight of two halves. The Londoner utilized an educated jab to set up an accurate right hand in the opener, and when Eggington applied more pressure in the second, he was nailed by a sharp right that shook him up.

Eggington, a habitually game warrior from Birmingham, was full of fire, but Cheeseman produced the better craft early. The punch variety was impressive and his defenses were more finely tuned. Those attributes were consistent and created a significant gap in the scoring.

The sixth produced some excellent two-way action, but while Eggington scored his best punches in this session, he was paid back in full by Cheeseman, who countered a flush left hook with a big right of his own. However, Eggington, the more experienced of the two, dug deep and produced more good work in the seventh, including a head-snapping right.

The eighth was one of the best rounds of the contest. Both men took turns at drilling the other with multi-punch salvos and Eggington was momentarily shaken again during an exchange. The action was getting better with each passing round and the bout was fascinatingly poised entering the final third.

The ninth was terrific too. Eggington (28-7, 17 KOs) was now firing on all cylinders and clipping Cheeseman to head and body. The gap was narrowing in what had become a battle of attrition and the championship rounds would decide the winner.

The 11th was good but the 12th was even better as both men hurt each other several times in the closing moments. The ebb and flow was incredible in what was arguably the most exciting fight we’ve seen since the sport made its comeback. 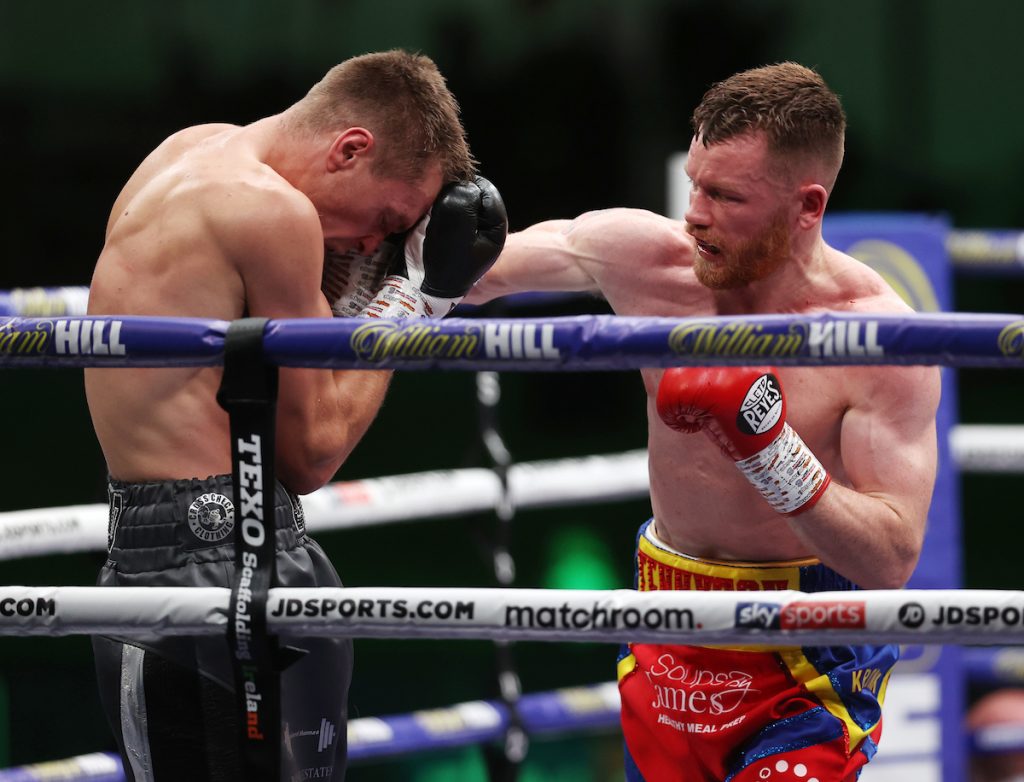 James Tennyson picked up the cherished Lonsdale belt at the expense of Gavin Gwynne. Photo by Mark Robinson

Northern Ireland’s Tennyson, who lost by fifth-round stoppage to then-IBF 130-pound titleholder Tevin Farmer in October 2018, landed a big right hand in the sixth and Gwynne took a count following a delayed reaction. Badly busted up around the face, the Welshman rose and fought back gamely, but Tennyson’s superior firepower proved decisive and referee Phil Edwards halted the action with Gwynne taking a pounding against the ropes. 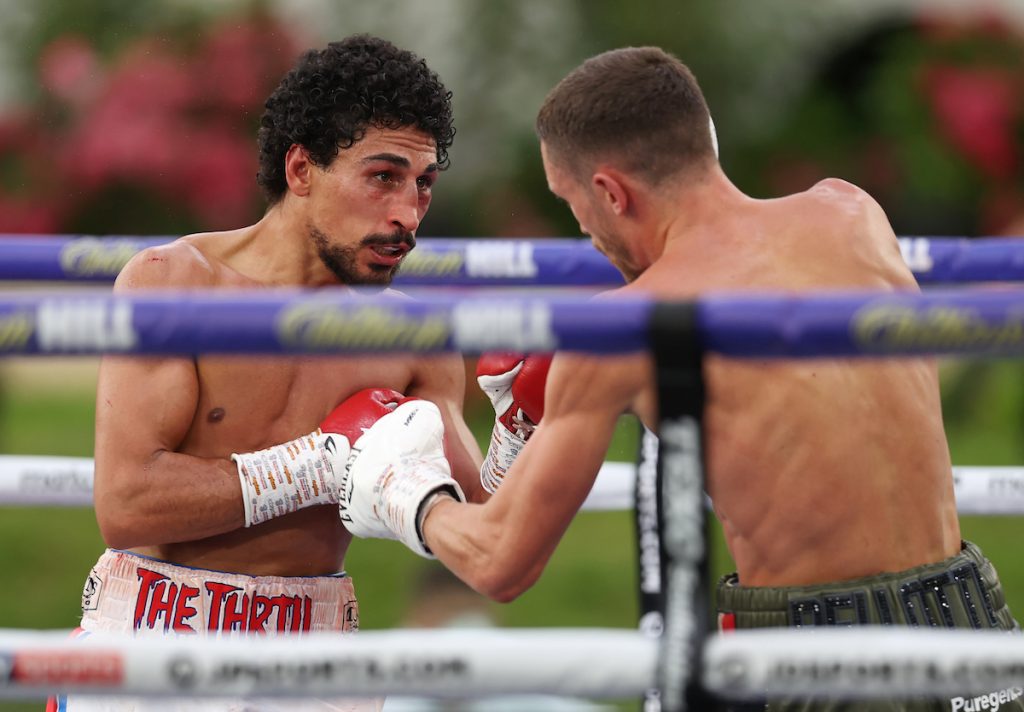 There were no knockdown and neither fighter was hurt, but Gill, for the most part, was a step ahead of his opponent who struggled to find consistency with his offense.

Gill is a talented operator whose only setback came against Mario Enrique Tinoco in May of last year. Rumors abound that the 26-year-old from Cambridgeshire had been ill in the lead up to that bout. 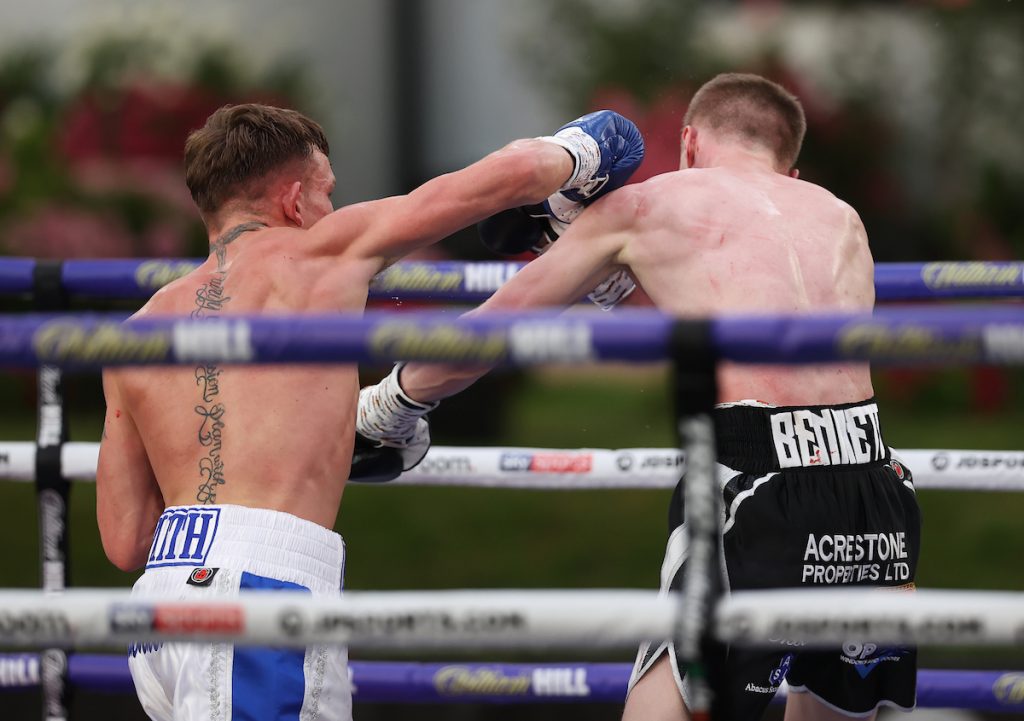 Smith, a highly-touted boxer-puncher from Sheffield, stunned Bennett with a left hook at the end of the first and maintained tactical superiority despite a game effort from his opponent.

The end came in the closing seconds of the fifth when Smith suddenly closed the gap with a brisk double jab to set up a sharp right hand to the temple. Bennett went down hard and was never going to beat the count.