Errol Spence Jr.-Danny Garcia is signed and set for November 21 in Los Angeles 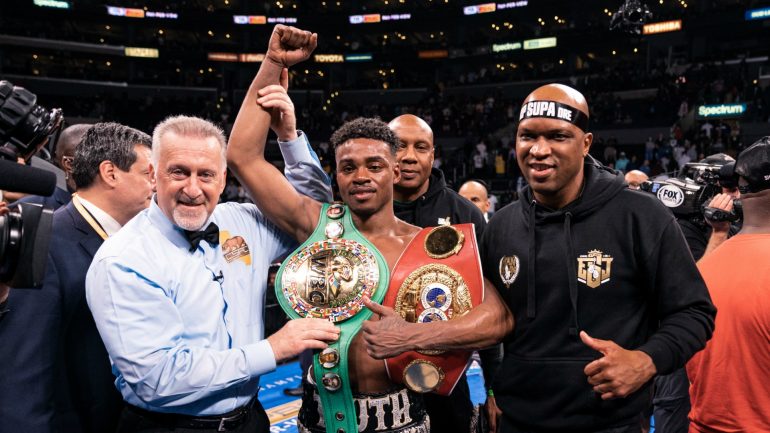 What had been speculated for months will finally occur on November 21 at the Microsoft Theater in Los Angeles, when Errol Spence Jr. makes his return to the ring against Danny Garcia, in what promises to be a competitive fight.

The IBF/WBC welterweight titlist, Spence (26-0, 21 knockouts) is back after surviving a horrific car accident on Oct. 10, when he crashed his Ferrari driving home in the early hours of the morning.

Toxicology reports confirmed Spence had been drinking, and he was charged with DWI, misdemeanor B. Spence was fortunate enough to be ejected from his car, which was going at a high speed, without suffering any major injuries.

Garcia (36-2, 21 KO) is coming off consecutive victories. Prior to that, he lost two of his previous three fights, suffering his first pro loss in 2017, losing by split-decision to Keith Thurman, and then a unanimous decision to Shawn Porter in September 2018.

The Spence-Garcia fight, first reported by Mike Coppinger of The Athletic, was originally scheduled for late-January 2020. But with the Spence car accident, and the COVID-19 pandemic hitting the world, talks of the two meeting were delayed for months.

But Spence, who’s publicly admitted he has not sparred since April, is coming off the car accident and Garcia is far from a push over in his first fight back.

It’s actually a bold move for Spence, who regardless of being one of boxing’s prime pound-for-pound best, may need more time to regain his championship form.

Fighting someone like Garcia is not an easy way to find that out.

A southpaw, Spence is fundamentally sound in every area of his game. Garcia is a come-forward, steady right-hander who relies heavily on a potent left hook.

What version of Spence will show up? How much does Garcia have left?

The boxing world will see November 21 in Los Angeles.