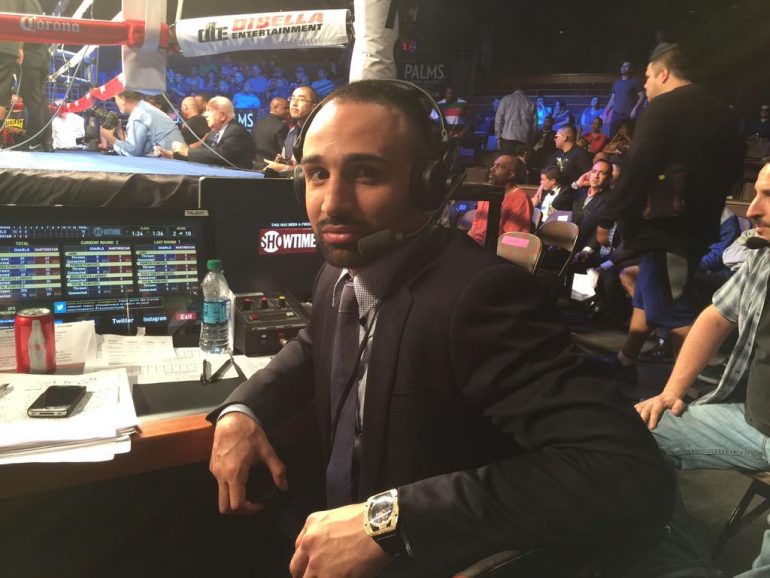 Paulie Malignaggi’s outspoken views have made him popular amongst boxing fans.

But comments Malignaggi made three months ago on race during an interview with IFL TV has cost him his job as an analyst for Showtime.

According to Boxing Scene’s Keith Idec, who was first to report the story, Malignaggi was eliminated from Showtime’s broadcast team because he refused a request from ViacomCBS to apologize for his comments.

Malignaggi was responding to comments made from 135-pound titlist Devin Haney (24-0, 15 knockouts) who stated in April that he’d “never let a white boy beat me.”

“He probably wasn’t talking about (Vasiliy) Lomachenko,” Malignaggi said. “I assume he was talking about Luke Campbell, who I think (is) the more viable opponent that Haney would be fighting.”

Malignaggi gave Haney the benefit of the doubt.

“When you’re in your early twenties, you probably don’t express that very well. It’s not something that great to make racial (statements) in 2020, especially with so many racial tensions in the world.”

Then Malignaggi delved into dominance in boxing and how throughout history, it has shifted via racial/ethnic lines.

“Boxing has had its course in history with certain demographics dominating more than others, right?” Malignaggi said in the video. “Maybe like 100 years ago, Irish fighters were better. And then the Jews and the Italians came in. I think the African-American fighter became most dominant in the sport in the 70s, 80s, and even 90s.”

Malignaggi (36-8, 7 knockouts), who retired in 2017 after suffering an eighth-round knockout at the hands of Sam Eggington, said “it’s not great to have the race discussion because it’s going to coordinate division,” before stating “it’s no longer the time of the African American anymore in boxing.”

“It’s (the Eastern Europeans) that has become the dominant species in boxing,” Malignaggi said. “I think stating something like (Haney’s statement) could be very dangerous.”

That turned out to be the case for Malignaggi, who had been a Showtime analyst since September 2012. According to Idec, the network is working on a severance agreement while he is off the air.

Malignaggi did not respond to a text message seeking comment from The Ring on Thursday afternoon.

The Brooklyn native remains an analyst for Sky Sports’ boxing coverage in the United Kingdom.

Showtime will return to the air Saturday night with its first boxing broadcast in nearly five months.

The 12-round contest will take place at the Mohegan Sun Arena in Uncasville, Connecticut, which will host all Showtime cards until the end of the year.