Hey Larry Holmes, Mike Tyson is on the line, wants you to fight on the Sept. 12 card 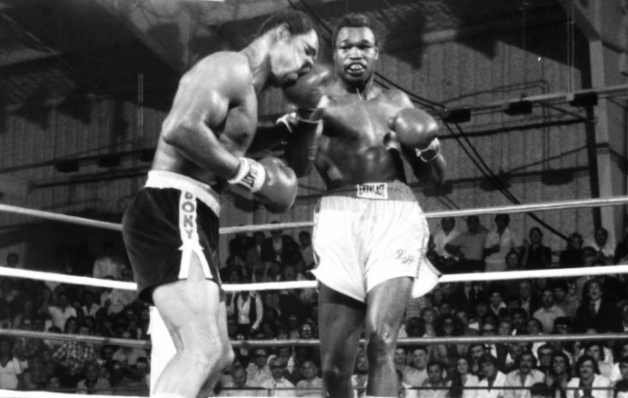 I swear to God, I think this has happened to me before. I really believe that I’ve called Larry Holmes, The Easton Assassin, and heard him say the same thing he said to me when I reached out a few days ago, to ask what he thought about that Mike Tyson exhibition match versus Roy Jones:

“Hold on, I’m cashing a check,” Holmes told me, before just a ten second pause, in which he handled his banking business.

In the boxing sphere, Larry Legend is Holmes, not Bird. Born in Georgia, the Hall of Famer is 70 years old. You really should acquaint yourself with Holmes on YouTube if you haven’t immersed yourself in his bouts. He was in some real crackers, and, truly, I found him a pleasure to watch.

That snapping jab, so persistent, so effective; at heavyweight Holmes will forever stand at or near the top in the category of possession of a wickedly effective table setter. He’d launch the thing, and be on those bouncy legs, get angles, rip nasty shots and damn right, move in for the kill when he saw you buzzed.

Below: June 9, 1978 at Caesars Palace….Leon Spinks had upset Muhammad Ali, and snatched the WBC heavyweight crown. Spinks have Ali a rematch, so the WBC wrested their title from the Marine, and awarded it to Norton, age 32. Holmes, age 28, was the fresher man. Enjoy the action. (Recommended by Eric Kelly.)

Below: June 11, 1982 at Caesars Palace….Holmes had made 11 defenses of his crown, and now was the time to take a bit more risk, and make more money. Enter a Great White Hope, Gerry Cooney. The racial element helped sell the fight. And sell it did; each man got a $10 million guarantee. Today, they truly are buddies, for the record. (Suggested by Evan Korn.)

Below: September 28, 1979 at Caesars Palace…Watch this one, to see how one shakes off the cobwebs after a nuclear bomb detonates on your face. Extra points, on this AJ Sutherland recommendation, because you can hear Howard Cosell doing his thing. By the way, this fight ran on free TV, on ABC, during prime time.

This Holmes take on how he should be seen in the grander scheme, of history, is spot on.

“I proved what I could do and my record speaks for itself,” Holmes told Tom Gray of RING. “I had 75 fights, 69 wins and 44 knockouts. That shows you the ability of a great fighter. I’m not saying I was the greatest because there’s been a lot of great fighters, but I’m one of the guys you have to recognize. I was a force to be reckoned with and you had to be ready or I would take you out of there.”

Larry is a pretty darned good interview, he basically gives zero Fs, he will say what’s on his mind and really has never been bothered if a feather gets ruffled along the way. 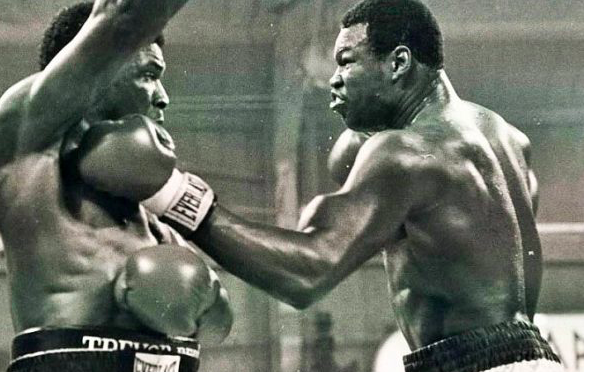 Holmes had to claw his way out of Ali’s shadow. But check it out–he’d have done better in this media age, because he was candid and provocative and that would be rewarded more in this era.

OK Larry, I said, you heard about this Tyson thing. What are your thoughts?

“I heard about it, I think it’s kinda crazy. Maybe they need a little money…I hope they do it and get a little money,” said the man who hung up the gloves, after threatening to do so and doing so and changing his mind multiple times, with a 69-6 mark. “And not get hurt.”

So you know, Holmes fought for the last time (we think) in July 2002. At age 52, he met Butterbean Essch, King of the Four Rounders and buffet demolitions. They went ten, Larry at 254 pounds got the better of the 334 pound ‘Bean.

Was this it, he was asked after. “I didn’t retire like twice before, I retired like seven times, and everybody came up with a lot of money, I came right back out. But as far as I’m concerned this is it.”

And it was–though Holmes hedged his bet, with a standing one and done loophole. If George Foreman wants to fight, he was saying even a few years after the Butterbean event, I’d do it, just one more time. They almost connected, and collided, in 1999, but the deal splintered.

So…back to the present, pondering the past, wondering just how much we’ve deteriorated…What about that time-honored tradition, boxers going on past their prime time because they didn’t handle their funds wisely. Wasn’t Larry smart with his money?

“Not bad for an old man,” he allowed.

He’s been wise with this virus, he said. “Knock on wood, I stay at home a lot with the wife,” he told RING. That virus is nastier the more we get up in age, that’s why you see all these fearless 20 somethings unafraid to slobber on each other at pool parties and such.

OK, so Holmes has respect for the power of the COVID. Here’s a query–Larry, what if Mike Tyson called you up, and said he wanted to put you on the Legends Only League undercard Sept. 12. Would you say yes? 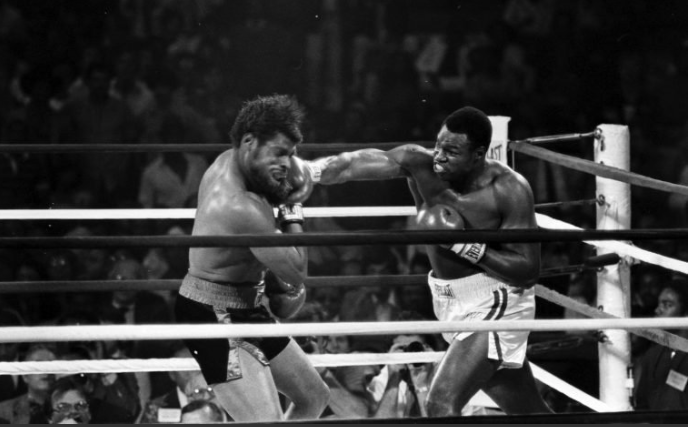 I told Holmes I’d already surveyed my guy Big George Foreman, and George shut the door on such an endeavor.

“George should consider it too, you can’t make that money after retiring, we ain’t getting no commercials now. Holyfield too.” I didn’t send him the Wikipedia link to get him up to speed on how well that grill did for The Preacher. Didn’t want Larry to get salty at Salton….

Hey, it’s not like this sort of event came out of nowhere, and strikes Holmes as novel. “Me and Gerry Cooney (see below, ex rivals, now besties) had already planned it, doing an exhibition, but then the virus came out, and the wife called it off,” he continued. 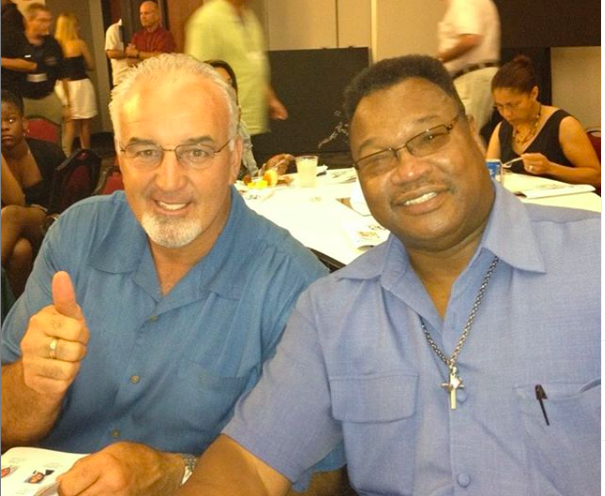 Really, might as well go for it, Holmes said. “Because who can say what’ll happen tomorrow. It’s not like they’ll try to hurt each other.”

He thinks that there will be feistiness in spots Sept. 12, that Mike might revert to form, have a flashback, try to sling one of those patented right uppercuts on Jones, who’ll weigh over 205 pounds and won’t have the mobility edge he once lorded over mere mortals.

“He might… if whoever he fights hit him, he don’t like, might try to hit him back. As a fan, I would watch it because it’s boxing, big guy versus the little guy, once the bell rings they’re not gonna let the other guy show him up.”

What, you out there, the 25 year old, the 30 year old, you think that you just hit a wall, and bang, competitive juices disappear? Nope. Sure, some guys lose the itch. But the greats, especially, they had a drive that helped propel them to rare heights. More pride, more of the juices. And the juice level, it sometimes isn’t as helpful at 40 as it was at 30. And if it’s still there at 50, it can cause problems at home. The wife isn’t interested in seeing if the clock can get turned back just one more time. I know, it’s stereotyping, but I’ve found women to be more sensible, more pragmatic, less prone to flights of fancy with the ego as catalytic converter. Many a blossoming comeback has been nipped in the bud by a missus. George Foreman can attest.

I put it to him, too; if Tyson reached out, and asked him if he’d like to be on the Tyson-Jones undercard, would he lace up? 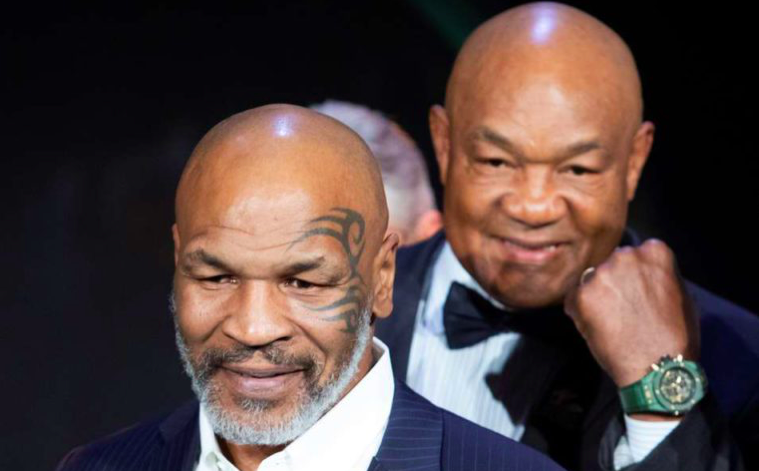 Tyson out front, Foreman behind, picture from a Hublot watch promotional outing.

“Tyson and Jones, looking for closure,” said Foreman, who fought for the last time, we think, in 1997. “Remember the movie, the kid told Bruce Willis, ‘They don’t see each other. They only see what they want to see. They don’t know they’re dead.’ I was there. My wife told me, when I said, ‘I can still do it,’ she said, ‘George, isn’t that the way you want to leave the sport, feeling you can?’ I died at those words and emerged from that purgatory and never looked back. I accepted death…of boxing.”

Check out that “last” fight, against Briggs, and tell me the 48 year old Texan didn’t get the better of the 26 year old New Yorker, way more chiseled but far less gritty than ole George. Briggs, today, is 48, and he’s chosen to allow his beard to go gray but won’t exit the fray. The Bare Knuckle bosses are waiting for the virus to play itself so they can invite patrons to get close to Briggs, who would still make the cut when a director was choosing compelling sorts to get after Mad Max on those post-apocalyptic buggie races.

OK, but what if Mike himself called, George?

He laughed, that deep from the belly Santa style chuckle. “It’s not like catch football, it’s nothing to play with. Back in the day, you get hit with a punch and you get dizzy, you shake it off. Later you get the same dizzy and it lasts a year.. or two…or forever.”

“Juices…you always wanna do what you been doing,” Holmes said, taking the other side of the debate stance. “Play basketball all day long, it’s time to quit, you don’t wanna quit. Ride a bike, mom says get off that bike, kid aint wanna get off that bike. I don’t blame Tyson or Holyfield or whoever if they think they can do it, and not get hurt, it’s fine.”

It’s like he talked about in his book, “Don’t Tell Me I Can’t,” written with Greg Armstrong. It hit the shelves in May. (Click here to order.) 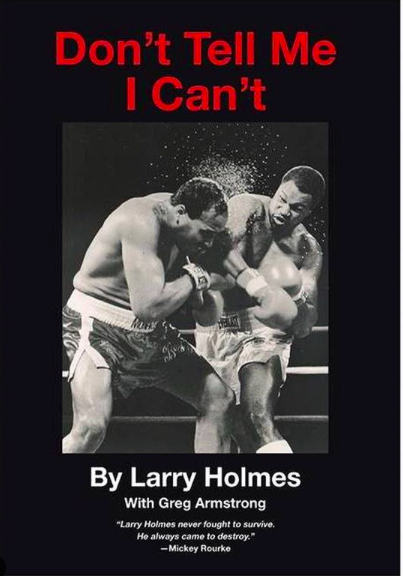 “When I started in boxing, they said, ‘You aint gonna be able to do that.’ I went to school, they picked on me, they said, ‘You can’t read that!’ And if you’re thinking you can’t, you don’t. I wanna climb the tree, and cut it down. And nobody really wants to see you make it. In the neighborhood, they say, ‘You ain’t gonna make it.’ They say, ‘You ain’t gonna be no doctor!’ Next thing you know, you’re operating on this motherfucker!”

Points being, from the outside, there will always be a majority of “nay” votes.

Plenty of reasons will be offered why you can’t, shouldn’t. You have kept tabs, you hear the critiques on Tyson and Jones. But we’re all eventually dust anyway, no?  As long as this event doesn’t get over- sold, and people don’t get their hopes up too high, keep their expectations reasonable, then I’m with Holmes. May as well, because Holmes isn’t wrong, who’s to say what’ll happen tomorrow? Or even later today.

–Michael Woods is a Brooklyn resident. He is the publisher of NYFights.com and has hosted the Everlast TALKBOX podcast since 2016.