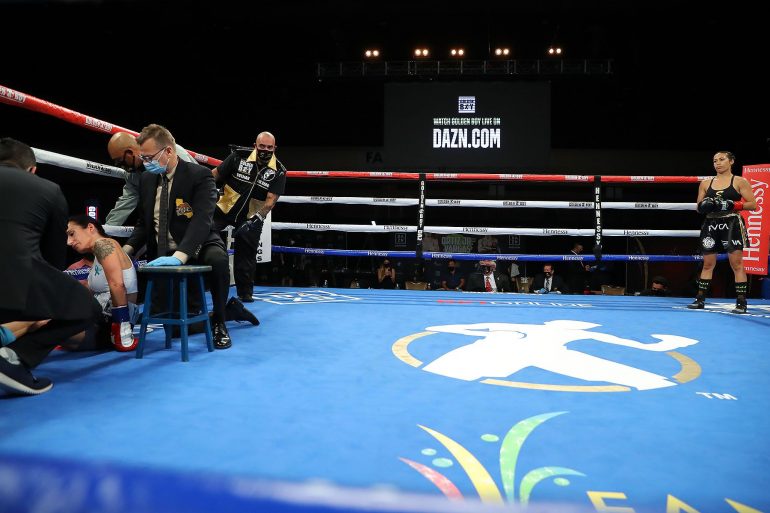 While Foster blamed himself for approving the fight, Diaz told The Ring that he takes “full responsibility” for what transpired.

“It’s not fair that Andy has taken this amount of criticism,” Diaz stated. “At the end of the day, he doesn’t make the fights – he is only involved in the process of approving them. I’ll take full responsibility – I was the one who made the fight.”

On the contrary, Diaz also wants fans to understand that his job is complicated. A rise in COVID-19 cases has led to travel restrictions, and with short notice on top of that, it is not easy to find fighters who are available and willing to fight.

Clavel (12-0, 2 knockouts), 29, of Montreal, was unable to compete because she fought on a Top Rank on ESPN card on July 21 at the MGM Grand Conference Center in Las Vegas, outpointing Natalie Gonzales over eight rounds.

Ortiz (31-3, 4 KOs), a 34-year-old hailing from Mexico, was also unprocurable because she has yet to obtain her visa.

Estrada was initially slated to return on March 28 against Mexican Jacky Calvo (12-5-2, 1 KO). The coronavirus then postponed the fight and Calvo was later forced to withdraw from the rescheduled July 24 date due to a knee injury.

“In hindsight, as Andy said, I wouldn’t have approved the fight,” Diaz added. “But in my shoes, the easiest thing would have been to tell Seniesa that she wouldn’t be fighting because we lost her opponent.

“But that would have been unfair to Seniesa. That would have been two camps in a row. The toughest thing to tell a fighter after they have done everything they’re supposed to do – cut weight, get in shape – is to come back and tell them, ‘Hey, you’re not fighting.'”

But some situations are unavoidable. For instance, lightweights Hector Tanajara and Mercito Gesta were set to be the chief support bout to the Vergil Ortiz Jr. – Samuel Vargas fight last week. Gesta came down with food poisoning the night before the weigh-in.

“Mercito’s team notified me at 7:30 (Thursday) morning that he was sick. At that point, because of the situation, the bubble they’re in, and all of the medical tests that have to be done because of COVID-19, there was no way I could find an opponent,” Diaz said. “With Seniesa, we had a couple of weeks.”

The Ring previously reported that Adkins is the wife of Midwest boxing promoter John Carden, owner of Carden Combat Sports. Rumors abound that he potentially played a role in landing Adkins the Estrada fight.

Diaz confirmed that he had direct talks with Carden.

“I asked for her amateur experience. The only thing I saw is what everyone else saw; she’s 5-0 with five knockouts,” he stated.

Even before Adkins got knocked out cold by Estrada, there were questions surrounding her resume. For instance, who were these “fighters” that she defeated, all of whom without a single win on their record?

A source reporting exclusively to The Ring with knowledge of the situation said that at least half of Adkins’ opponents are strippers and not at all affiliated with the sweet science.

“They show up to the venue with nothing,” the source said. “No shorts. No shoes. No mouthguard. Nothing. Then, they borrow from (other) fighters. It’s really fucked up.”

To make the matter worse, Carden, who is yet to respond to several voicemail inquiries left by The Ring on Sunday, set up all of those fights. One of those bouts was a “title” fight for the once-defunct WIBA title in an October 2019 rematch between Adkins and Shania Ward, which Adkins won by first-round knockout. Six months prior, Ward made her debut against Adkins and was knocked out in that fight, too. Somehow after getting knocked out by Alicia Acero just months later, Ward became eligible to fight for a belt with a winless record.

Diaz implied that Adkins shouldn’t have been given a license.

“If you see a fighter that’s not capable (of meeting certain expectations), they shouldn’t license them,” he said. “I’m just happy that she’s okay, that’s the most important thing.”

Diaz also reiterated that Carden had no problem with his wife facing Estrada.

This isn’t the first time, however, that Carden has found himself surrounded by controversy.

According to Boxing Insider, the promoter staged a fight between James Kindred, who previously competed in the Special Olympics, and pro boxer Bryan Timmons, in April 2016.

Carden may have not been initially aware of Kindred’s condition, but according to sources reporting to The Ring, when informed by a member of the commission that they recognized Kindred from the Special Olympics, Carden still did nothing to stop the fight. That individual also told Timmons, who refused to hurt Kindred, and won via second-round stoppage. Carden eventually apologized to Timmons on Facebook, but the Missouri native was furious.

“John, you can take your apology and shove it!!” Timmons stated. “You knew the whole time what you did and now you are trying to cover your ass. You care more about the money in your pocket than you do the safety of the fighters and there is a special place in hell for someone like you.”