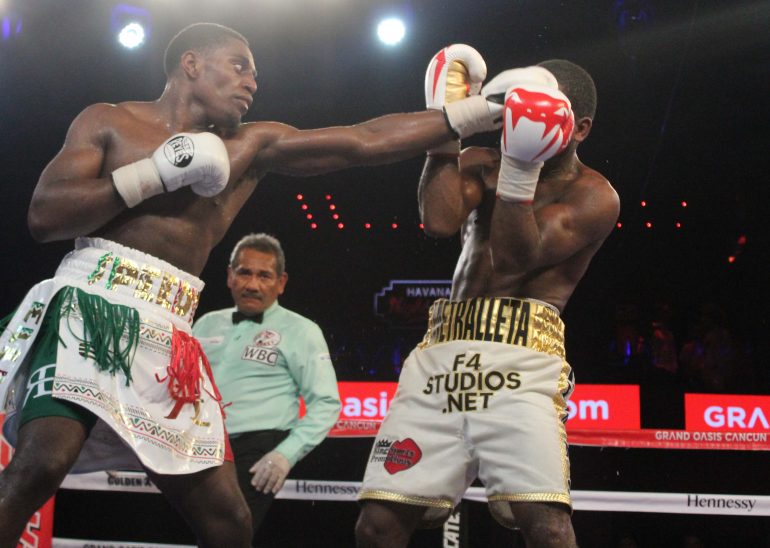 The 10-round bout will take place at the Fantasy Springs Resort Casino in Indio, California and will precede the main event bout between former world titleholders Jorge Linares and Javier Fortuna.

“Rashidi Ellis is a big problem for everyone at 147 pounds,” said Oscar De La Hoya, Chairman and CEO of Golden Boy. “He may very well have the quickest hands in boxing, and he’s eager to fight the very best in the division. We’re proud to have him lead our explosive undercard for August 28.

Ellis (22-0, 14 knockouts), who resides in the Boston suburb of Lynn, Massachusetts, defeated Eddie Gomez by unanimous decision in his last bout on November 23. The fight was a rematch of their December 2016 clash, where Ellis scored a spectacular first round knockout.

Both fights occurred at Fantasy Springs in Indio.

“I’m finally back in the ring on August 28 on DAZN,” said Ellis, who also has wins over Alberto Mosquera and John Karl Sosa. “I’m happy that it will be at my favorite place, Fantasy Springs Resort Casino. Brad Solomon his coming off some very tough challenges, but I’m coming to make a statement. I’m going to show that I’m the best in the welterweight division and that I’m ready for a title shot.”

Solomon (28-3, 9 KOs), who resides in Douglasville, Georgia, lost by unanimous decision to Alexis Rocha in his last bout on February 14. Two months prior to the Rocha fight, Solomon was dropped three times before the fight was stopped in round 5.

Despite his recent setbacks, Solomon is confident he can pull off the upset win over Ellis.

Golden Boy also announced a handful of fights on the undercard.

Former world junior lightweight title challenger Lamont Roach of Washington, DC will square off against Neil Tabanao (17-7, 11 KOs) of the Philippines in a 10-round bout. Roach (19-1-1, 7 KOs) suffered his first loss as a pro on November 9 in a decision loss to WBO titleholder Jamel Herring.

Alexis Rocha (16-0, 10 KOs) of Santa Ana, California will attempt to build off the win over Solomon when he faces Jameson Bacon (23-4, 15 KOs) of the Philippines in a 10-round welterweight bout. Rocha is the younger brother of junior featherweight contender Ronny Rios.

Super middleweight prospect Bektemir Melikuziev (5-0, 4 KOs) of Uzbekistan will square off against Mexico’s Alan Campa (17-5, 11 KOs) in an 10-round bout.

The Linares-Fortuna fight will be Golden Boy’s second card since the start of the COVID-19 pandemic. Just as this past Friday’s card, no fans or media will be in attendance for the August 28 card.