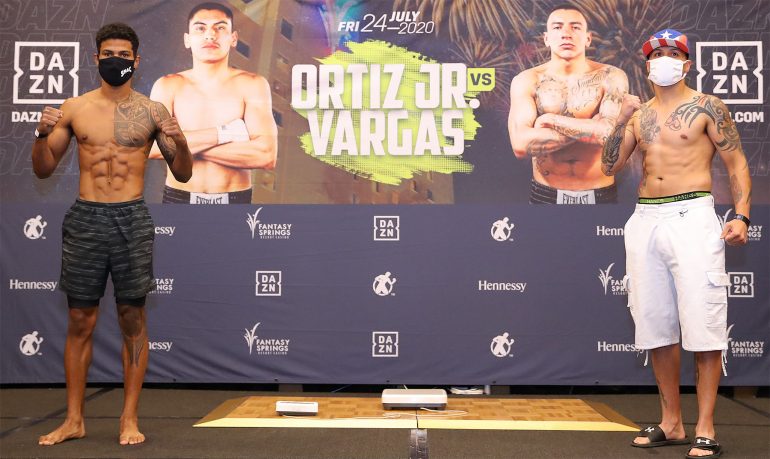 Shane Mosley Jr. took another step in the right direction to make a name for himself in boxing.

The second-generation fighter outboxed Jeremy Ramos to win an eight-round unanimous decision in their middleweight contest.

Judge Edward Hernandez Sr. scored the bout 79-73, while Lou Moret and Pat Russell each scored the contest 80-72 in favor of Mosley in their DAZN-streamed bout Friday evening at Fantasy Springs Resort Casino in Indio, California.

Mosley, the son of Hall of Fame former three-division world champion Shane Mosley Sr., used his height and reach to impose his will on Ramos in the opening round. Ramos, who works as a full-time barber in Colorado Springs, spent much of the frame trying to feel out his adversary.

Mosley let his hands fly in the second round. He connected with a right hand to the gut of Ramos. But Ramos returned fire with a left hook to the body. With seconds remaining in the round, Mosley backed up Ramos with a hard right hand.

An offensive onslaught by both fighters made it for a very entertaining third frame. Mosley landed a clean straight right hand and followed up with a crisp jab that snapped Ramos’ head back. With :20 remaining in the frame, Ramos took advantage of Mosley keeping his head too high, landing with a left hook and a right to the head. Mosley then used his long jab to dictate the pace from long range.

In the fourth round, Ramos looked to chop Mosley down with right hands. But it was Mosley that ended up catching him with a right hand to the body that hurt him. For the rest of the round, Ramos was fighting with his mouth open.

Mosley began to dictate the pace in the fifth round, backing Ramos up with a stiff jab and digging downstairs to the body. With about 1:15 left in the round, Mosley landed with a left uppercut, and then connected with a winging right uppercut.

Before the beginning of the sixth round, Mosley got an earful from trainer Justin Gamber, who chastised his for letting his foot off the gas pedal and not knocking out Ramos in the previous frame.

But it was Ramos who had his best round of the night in round six, smacking Mosley with a hard left hook to the head. Then he cut off the distance and connected with crisp left hands to the body that clearly slowed down his opponent.

But following his worst round of the evening, Mosley recovered with his finest. He worked behind a stiff jab and fought at a composed, relaxed pace. Late in the seventh round, Mosley popped him with a one-two combination from the outside as Ramos was not in range for a counter.

Ramos came into the eighth round needing a KO, but his gas tank proved to be a liability. Mosley landed a left-right hook combo with a minute left in the frame. Both men fought to the end of the bell. Mosley landed a right cross to end the night, as Ramos nearly collided with the referee while boxing off his backfoot.