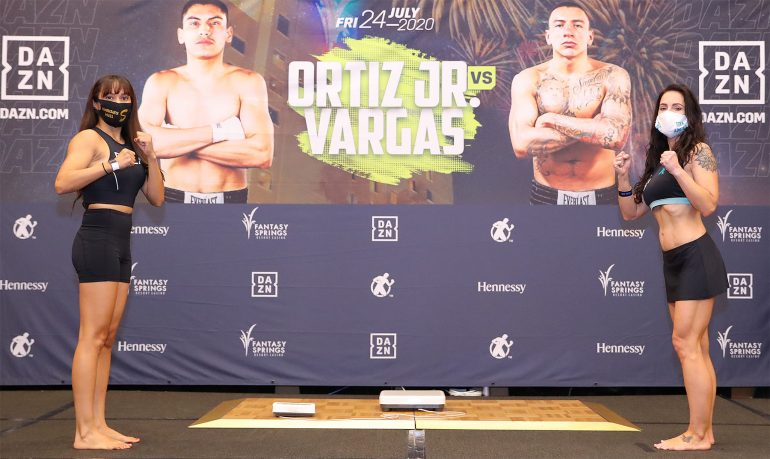 Five punches in seven seconds is all it took.

Estrada (19-0, 8 knockouts), 28, of Los Angeles, California, charged directly at Adkins and connected with a five-punch combination, a left jab, a left hook, a right uppercut to the body, another left hook, and right hand to the head to finish her off.

Adkins, a 42-year-old fighter from Topeka, Kansas, came into the fight undefeated in five bouts, with all five victories coming by way of knockout. But all of her competitors were either winless or were making their pro debuts.

To say that Estrada was a significant step-up in competition, would be a massive understatement.

For Estrada, it is her sixth knockout in her past seven bouts. She was coming off an impressive performance over previously unbeaten Marlen Esparza with a nine-round technical decision last November in Las Vegas.

Estrada previously told The Ring that she would be open to fighting Esparza again, despite their bad blood.

“As long as it’s a big fight, I don’t mind,” Estrada told The Ring. “But I’m willing to fight Esparza again. I still don’t like her. I don’t think I ever will.

“But the rematch would be great for women’s boxing.”

It was a one-sided night for junior featherweight prospect Hector Valdez, who easily outpointed Josue Morales over eight rounds.

With the win, the 25-year-old Valdez improved to 13-0 with eight knockouts.

Two of the three judges had it a shutout for Valdez. Max DeLuca and Lou Moret had it 80-72, and Edward Hernandez Sr. scored it 79-73, all for Valdez.

With :20 left in the round, Valdez buckled Morales with a sharp right hand.

Valdez landed a sharp jab about a minute into the second frame. A short time later, he backed Morales into the ropes and connected with a series of blows to the head and the body.

Morales landed his best punch of the night late in the round with a straight left to Valdez’s midsection.

In the third round, Valdez landed with consecutive one-two combinations. In each instance, he finished off the combo with a right to the body, which appeared to bother Morales. Valdez then knocked him off balance with a right hand.

Morales spent the rest of the round on his bicycle, listening to instructions from his corner to keep moving to offset Valdez’s offense.

Morales came out firing jabs and left hands to start the fourth round. But he was standing right in front of Valdez, who countered him with a right then, and went back to work downstairs. About a minute into the round, Valdez landed with a crisp left hook to the body.

A sweeping left hook landed for Valdez after Morales threw a lazy jab in the fifth round. Late in the round, Valdez connected with a series of left hooks to the body that bothered Morales, who has never been down in his pro career.

Morales connected with a couple left hands to the body to start the sixth round. But Valdez was also working effectively behind his jab and was consistently landing blows and darting out of range.

About :45 into the seventh round, Morales surprised Valdez with a hard straight left hand that landed clean. Both fighters traded jabs with about 1:15 left in the frame, then Valdez connected with a right cross as Morales was backing up.

Valdez literally started from the bottom. He made $1 in his pro debut on April 5, 2014, when he blasted fellow newcomer David Almendarez in one round in Fort Worth, Texas. But in January, Golden Boy signed him to a promotional contract.

He made an excellent case that his promoter’s decision was a solid one, as he thoroughly dominated the action.

In the final round, Valdez caught the southpaw with a one-two combination. Then he spent the rest of the round looking for the knockout, grunting with every shot, and digging with hard combinations to the body and upstairs.

With about :40 left in the round, Morales, who dropped to 11-12 (1 KO), was smiling at Valdez but wasn’t offering much offensively, other than a couple of jabs.