Sergio Mora is eager to return to calling fights at ringside 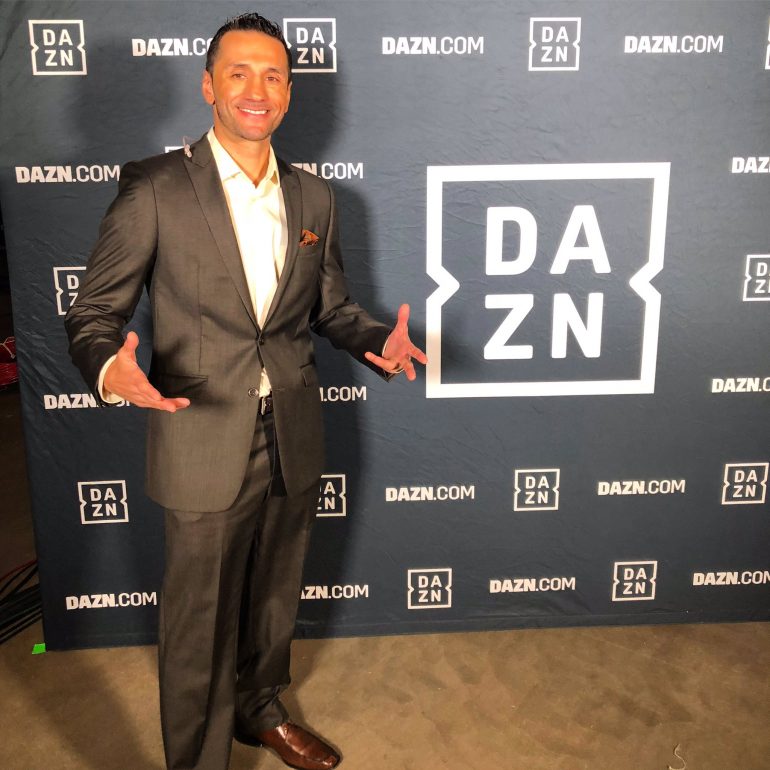 As dates are being finalized for more fight cards to take place on television or streaming platforms over the next couple of months, boxing fans are eager for more of a sense of normalcy after months of stay-at-home orders during this COVID-19 pandemic.

Sergio Mora is one of those people, eager to see the sport pick up again, especially calling the action on DAZN.

Mora will be ringside alongside play-by-play announced Todd Grisham Friday night as undefeated welterweight Vergil Ortiz, Jr. squares off against Samuel Vargas at the Fantasy Springs Resort Casino in Indio, California. The 12-round bout will stream live on the social media platform (8 p.m. ET/ 5 p.m. PT).

Mora, a former world junior middleweight titleholder and winner of the first season of ‘The Contender’ who last fought in 2018, provides color commentary for fight cards on DAZN and co-hosts ‘JABS,’ a twice a week boxing podcast, with NBA and boxing reporter Chris Mannix.

The 39-year-old has hunkered down in his Los Angeles-area home throughout the pandemic and is glad to be calling Friday’s action from ringside, albeit there will be no fans in attendance at the venue.

“I stopped watching the news because I was getting a little paranoid,” Mora told The Ring Tuesday afternoon. “I get the necessary daily information and brush up on current events. Basically, I’ve been doing the show with Chris, talking about hot topics in boxing, DAZN fighters, etc. I work from my living room with a camera and pro-lighting.

“Am I excited to get out of the house? I have two children and I can’t wait to get out of the house. I know it’ll be a little nervous, but I know the commission is going to enforce the protocols when we arrive to the venue to ensure safety. I’m just curious to see how it’ll all be with no fans in attendance.”

Mora was one of several people, which included fighters, trainers, staff at Golden Boy Promotions and DAZN to get screened upon arriving at the venue on Wednesday. Similar to what ESPN and Top Rank staff had to go through in June and this month at the MGM Grand Conference Center, all people participating in Friday’s card have to adhere to strict regulations and mandates by the State of California and the Athletic Commission.

Aside from having their temperature checked, a COVID-19 test is administered. Once the results are negative, participants cannot leave the Fantasy Springs property and must remain in designated areas.

“We basically go from our rooms to an area to get something to eat, then to a room for fighter meetings, and finally the venue,” said Mora. “We can’t go anywhere else and we have to social distance and wear masks.”

Mora has called a handful of Ortiz’s fights from ringside. Ortiz has notched impressive victories, including knockouts over former world title challengers Mauricio Herrera and Antonio Orozco. In his last bout on December 13, Ortiz knocked out former contender Brad Solomon.

Ortiz has yet to hit his ceiling at the age of 22 and figures to only get better with trainer Robert Garcia. Mora compares Ortiz to a former world titleholder and wonders what type of test Samuel Vargas give Ortiz.

“When I watch Vergil Ortiz, he reminds me of a Fernando Vargas. He has stepped up in competition and knocks out fighters. It’s impressive because he knocks out fighters that have never been stopped before. Champions could not knock out Orozco and Herrera.”

“Vargas has the experience factor in his favor, which is a huge advantage for him. Once in a while, you get fights where fighters with experience, especially if they’ve faced solid opposition, that know how to apply and deal with pressure. Is this Vargas’ last stand? That could be another advantage for Vargas as well. Or will he have the mentality of going into the fight of gaining a moral victory if he goes the distance with Ortiz and loses.”

Mora has also been monitoring the situation between unbeaten lightweight Ryan Garcia and Golden Boy. Garcia was originally scheduled to headline the card, which was originally planned for Fourth of July weekend, but a fallout in negotiating a purse for the fight forced the promotional company to move on without Garcia.

Mora considers Garcia to be a top young fighter, but would like to see how he fares against someone with experience.

“I think Ryan Garcia is a great boxer. He’s a stud with a huge social media following. There’s some legit questions as to the level of opposition he has faced. He does have the two solid knockout victories over Romero Duno and Francisco Fonseca, but fighting the likes of Jorge Linares would be interesting. Linares has experience and has faced the better opposition. Nothing beats experience.”

Asked who he would pick in a showdown between Garcia and WBC lightweight titleholder Devin Haney, Mora sided with Haney.

“You have to give Haney the benefit of the doubt. He is the WBC champion, whether he won it in the ring or by the sanctioning body giving him the time. Garcia is hot after those two knockout victories, but Haney is no joke. He’s a special fighter. It would be a great fight to watch if that ever gets made.”