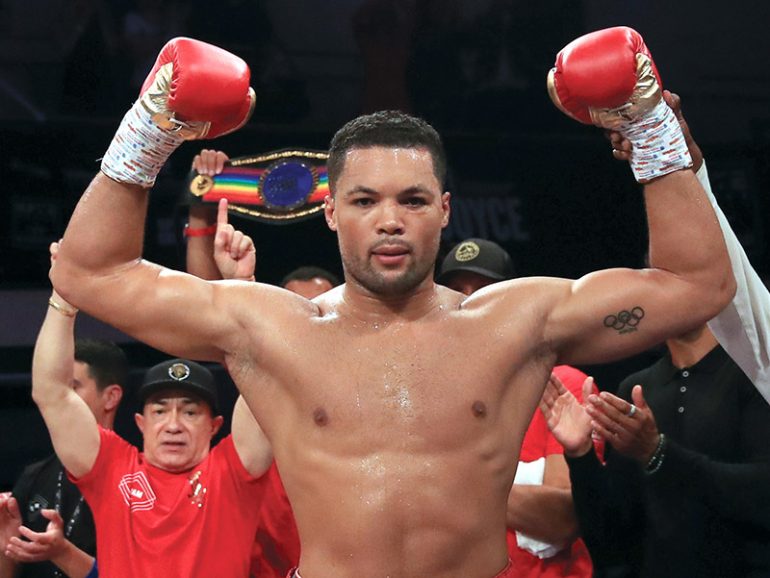 It’s been more than a year since Joe Joyce last fought. Joyce (10-0, 9 knockouts) says he’s in great shape, and his training camp has been good.

This will mark Joyce’s return to the ring since he decisioned Bryant Jennings last July. It was the first time Joyce, 34, Putney, United Kingdom, went the distance as a pro and the first time he went 12 rounds. The 2016 super heavyweight Olympic silver medalist knows where his focus should lie.

Looming in the distance is a fetching distraction in the Saturday, October 24 date against Daniel Dubois at the O2 Arena.

If Joyce blows this, that showdown goes away, too.

“It’s why I’m taking this (Wallisch) fight very seriously,” Joyce said. “I’ve seen some clips of him on YouTube. I watched his fights against Efe Ajagba and Tony Yoka. I know Wallisch is a good fighter, and I know how tough he will be Saturday night.

“Now he’s saying he’s trying to mess up my deal (against Dubois). We’ll have to see about that.”

Joyce knows the difference between sparring and actually fighting. His weight is around 265, 270.

“Fans should expect pretty much the same from me, maybe getting hit a little less (laughs),” Joyce said. “I’m working on getting back into boxing shape. I’m picking it up again, because I wasn’t able to do much boxing-specific training. It’s why it’s good to have a fight lined up for this weekend.”

Joyce said, given more time, he would like to be a little lighter. He usually fights around 255.

“I want this fight to go a couple of rounds, and it’s why I have a decent opponent,” Joyce said. “There’s no sense in getting someone who I can knock out in the first round. That does me no good. I want to do the work; I want to be under fire again and get a taste for winning against someone who is good.

“I want to create a roll again and be ready for the Dubois fight. This is the first step towards that.”

The most promising fight on the card pits undefeated junior featherweights Chris Bourke (7-0, 5 KOs) and Ramez Mahmood (11-0, 2 KOs) against each other in a 10-round bout.

Mahmood is from Ilford. He’s a 26-year-old, 5-foot-6 math teacher that goes by the great nickname “The Mathemagician.” Bourke is a 25-year-old southpaw from Streatham, who’s stopped five of his seven opponents.

Bourke is listed by BoxRec at 5-foot-4, though numerous respected boxing outlets in England list him at 5-foot-7. They’re fighting for a vacant award called the British Boxing Board of Control Southern Area super bantamweight title.