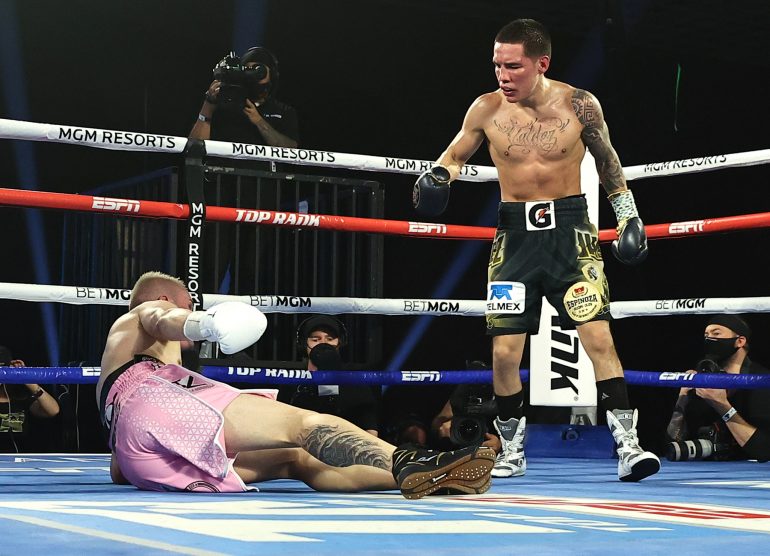 Valdez improves to 28-0, 22 knockouts and will likely next face WBC titleholder Miguel Berchelt, for who he is the mandatory challenger.

The 29-year-old Valdez, a former WBO featherweight titleholder from Nogales, Mexico, made his debut at 130 pounds in his previous fight on November 30, overcoming a knockdown before stopping Adam Lopez in round 6.

Velez figured to be a stay-busy fight, considering he has faced some of the top fighters at 126 and 130 pounds, including the likes of Joseph ‘JoJo’ Diaz, Ronny Rios, Alberto Mercado, Juan Manuel Lopez, and most recently Ryan Garcia.

From the opening bell, Valdez worked from the outside, but was effective in closing the distance to connect with left-right combinations to the head. Velez attempted to counter as Valdez rarely jabbed moving in, throwing lead or counter hooks or right crosses.

“I felt a little rusty at first,” said Valdez after the fight. “I was well-conditioned for this fight, thanks to (trainer) Eddy Reynoso.”

As the bout progressed up until the middle rounds, Velez began timing Valdez, connecting with counter right hands that began to bruise the face of Valdez. Towards the end of round 5, Valdez dropped Velez with a left hook to the head. Velez beat the count and Valdez attempted to follow up, but the bell sounded to end the round, saving Velez from receiving further punishment.

Velez became the aggressor in round 7, walking Valdez down and forcing him to fight off his back foot. Valdez was able to connect with lead or counter left hooks to the head.

Moments into round 9, Velez was deducted a point by referee Tony Weeks for landing a low blow. That did stop Velez from connecting to the body of Valdez during exchanges following the point deduction.

CompuBox numbers showed a decisive edge to Valdez, who connected on 138 of 472 total punches (20 percent). Velez only landed 67 of 566 total punches (12 percent)

Valdez believes he can still get better from Tuesday’s performance but believes he is ready to face Berchelt for the WBC title.

“You never stop learning in boxing,” said Valdez, who is promoted by Top Rank and managed by Frank Espinoza. “I learn from Eddy. I still have yet to prove that. I give myself a ‘7’ tonight.”

“I have a lot to improve on. Berchelt is a great champion. I’m hungry for that world title. That’s definitely the fight I want. It’s a dream to win that WBC title.”

Velez, who resides in Juncos, Puerto Rico, drops to 29-7-1, 21 KOs. The loss to Valdez was the first time in his pro career Velez lost by knockout.