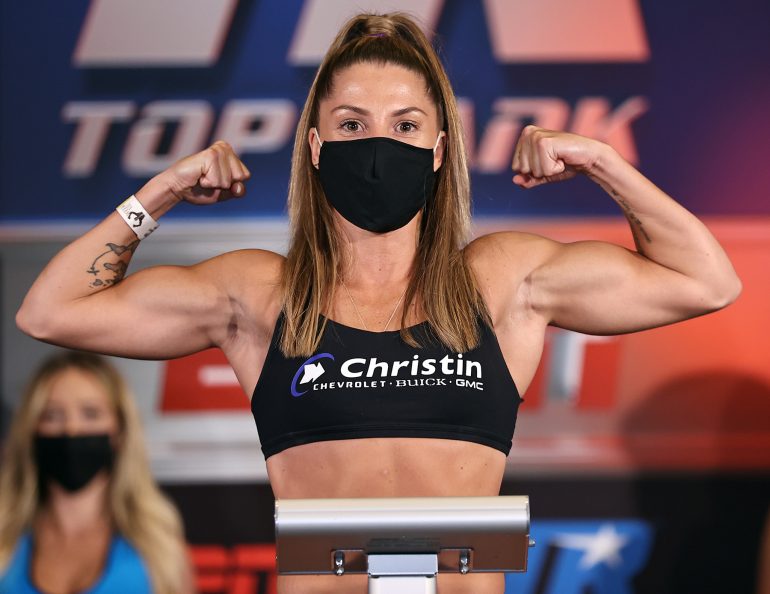 Often times it was Kim Clavel’s hands a dying patient last touched before they passed.

Those healing hands get a strange break in a boxing ring Tuesday night.

This is Clavel’s first time in Las Vegas. The 29-year-old Canadian junior flyweight has a great view out of her MGM Grand hotel suite.

Regrettably, it’s about the only thing she’s going to be able to see of Las Vegas, with the COVID-19 pandemic restricting movement. She revels in what she can. She’s earned the right to cherish tiny pieces.

Clavel (11-0, 2 knockouts) will be coming off the longest layoff of her career, when she faces 29-year-old Natalie Gonzalez (6-0, 2 KOs) in an eight-round undercard fight on the Oscar Valdez-Jayson Velez 10-round junior lightweight main event from the MGM Grand Conference Center in Las Vegas, Nevada, on ESPN/ESPN Deportes (8 p.m. ET/ 5 p.m. PT).

It’s a welcome diversion for Clavel, the 2020 Pat Tillman Award for Service winner.

The last five months, she’s dealt with death every day as a nurse dealing with the ravages of the COVID-19 pandemic. It was a stark difference from working in a maternity ward when she was home in Joliette, Quebec.

“I saw people dying and I was used to working night shifts, so I worked alone and I was there alone when the family wasn’t allowed in,” Clavel said. “I was the last hand they held. It happened a few times a week.

“I worked six years with newborns and mothers. I dealt with life for six years, and the last few months, I had to deal with death. It’s made me enjoy the present moment and here I am, at the MGM Grand, and I want to enjoy every moment, because tomorrow you never know.”

So, hitting a heavybag and training for a fight on national TV is something Clavel has embraced.

It explains why Clavel can’t wait to fight.

“I’m looking out of my window and it’s all I can do,” she said. “We take shuttles to the facility and we get COVID tested.”

Clavel says she knows a little about Gonzalez. She saw her fight on YouTube. She knows Gonzalez has a good amateur background and works well in combinations. Clavel has a good strategy to deter that, she says, and she stresses that she’s ready.

But Clavel is also fighting for the first time in seven months, the longest sabbatical she’s had in her pro career. She was supposed to fight in March against Esmeralda Moreno, in Montreal, but 10 days before the fight, everything shut down due to the coronavirus.

“Yes, this is the longest I’ve gone when I didn’t fight,” Clavel said. “But I think it’s longer for Gonzalez. She hasn’t fought since October. I’m hoping to get in the ring before the end of the year.

“I hope it’s not longer than seven months. In Quebec, we cannot fight right now. We cannot even spar. They play hockey, they play soccer and they play football, but we cannot box. I’ll have to come back and fight in the U.S.A.”

For now, Clavel will try to make up for the lost time COVID-19 has taken from her, with the dichotomy being a pleasure to punch someone in the face as opposed to holding someone’s hand as they take their last breath.