Meet Manager Sam Jones, who is rising as fast in the boxing world as he talks 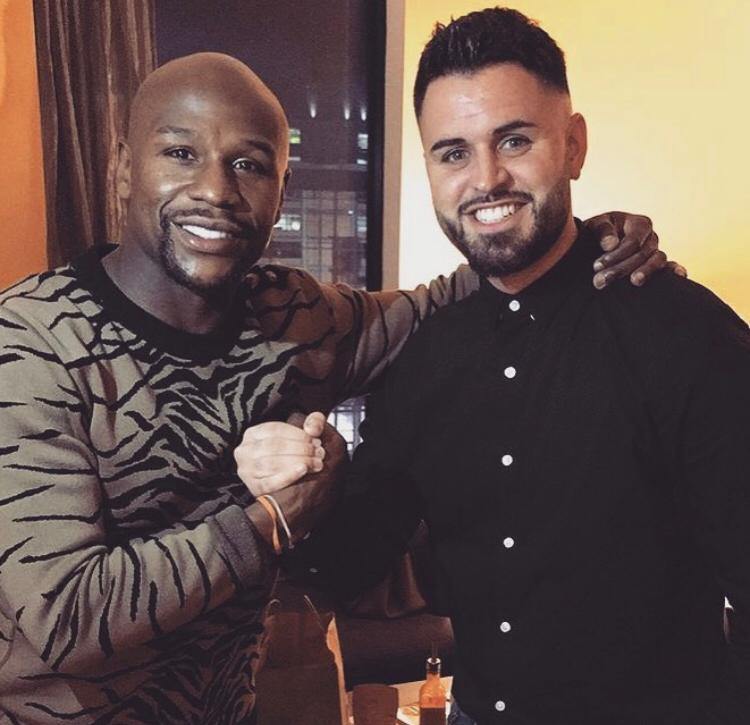 Sam Jones squinted at the sun burst through the windshield. This would be a good drive, he thought to himself. He had heard ‘no’ before. Probably too many times, over too many years by teachers, by coaches, by co-workers.

This 50-minute, 32-mile trek from Derby, England, to Walsall would give him perspective on those uncomfortable moments. Put them in his rearview mirror with all of the ‘noes’ he had to absorb.

Afterall, he was told, the interview he was driving to for an internal promotion was a mere formality. The job was supposed his—and only his.

Jones was soon introduced to another word in his rebuff vocabulary, ‘sorry.’

Rejected, he went back to his car, slammed his steering wheel and stewed for 20 minutes. An optimistic trip turned into a reflecting, life-changing journey home.

It occurred six years ago, but to Jones, it was like yesterday. The company, which his father was a long-time staple of, opted not to take a risk with him in a managerial position. So, Jones decided he would be the one determining his own risks. He dropped everything he was doing and took a chance.

A gamble that’s made Jones, 31, one of England’s fastest rising boxing managers and someone the American boxing community will soon know.

Jones, along with esteemed 44-year-old attorney Adam Morallee, runs S-JAM Boxing, founded in 2017. It’s a self-designed boutique shop of seven fighters, though in the coming years promises to grow.

At its foundation is Jones, a bombastic, bold, brazen guy from Derby, who’s not afraid to speak his mind, nor fearful of treading on the feelings of others. He comes across as arrogant, and self-promoting, but when you peel back the layers, you actually find a pretty caring guy from a working-class background who would do anything for his fighters.

Jones knows where his truth lies. He’s content on being someone’s shot of whiskey rather than their cup of tea.

He’s probably the only manager in the world who’s aware which one of his fighters snore and what they like to eat—because it’s Jones who’s not afraid to pull out the roll-out sofa bed in hotel rooms, or serve as their training camp chef, when he’s not on the phone.

His mantra is the Muhammad Ali quote: “He who is not courageous enough to take risks will accomplish nothing in life.”

It goes back to that one day he got shot down for a job that he thought was a sure shot.

“I was told I would always be a plugger in life; that I would be just a plugger,” Jones said. “I was told by teachers I wouldn’t amount to much. I remember going to that interview and I was ticked, because I was going to get that job.

“I drove an hour to hear ‘Sorry, you don’t have enough managerial experience.’ I remember telling them how was I going to get it, if the company was never going to take the risk in hiring me! I was told ‘no’ for years in my life. I learned not to be scared to take ‘no’ for an answer. Anything is possible.

Jones comes from a distinguished British boxing pedigree. His great uncle, his paternal grandfather’s brother, was Tommy Jones, who fought at lightweight, welterweight and middleweight, compiling an insane 102-19-3 record, with 48 KOs, fighting from the late-1930s to 1950. Tommy, unfortunately, died at 69 on Sept. 1, 1989, suffered from mental health issues that came from 124 fights.

The youngest of two, with an older sister, Sam was brought up in a single, three-bedroom home. His parents divorced when he was nine, though both parents raised him. His father Mark was a general manager for 26 years and auctioneer for 30 years for British Car Auctions (BCA), which aided Sam in getting in the door there.

It was also Mark who would sweat buckets at each parents’ meeting with teachers. That’s because Sam would wait until his father left for work, then intercept the mailman dropping off another of his teachers’ naughty letters. Young Sam would either tear the missives up or forge his father’s signature before his father could see it.

“I only told my dad recently about that,” Sam says, laughing. “My teachers would tell my father how I was this really nice kid, but there was always a big box there in the end. I benefitted because my dad’s handwriting wasn’t the best, like mine. His signature was easy to forge.

“I was always getting in trouble; I wasn’t the best-behaved kid in school.”

But he had a tad of ingenuity, though misguided.

Jones attended Burton and South Derbyshire College, in Derby, to study electronical engineering. It was his way of prolonging not going to work on a steady basis.

It also honed his opportunistic skills.

“I was in a welding class and I was never any good at it; so, one day the professor says you have three hours to do this project,” Jones recalled. “It came to the end and there was this really intelligent student who finished his welding plaque.

“He put his initials on it, then he put it in this box and placed it in the professor’s drawer. Now, I hadn’t done any work on mine at all. When the professor left, I grabbed the professor’s key, unlocked the drawer and took the plaque out.”

Jones engraved his initials on top of the other kid’s. The professor didn’t notice a thing. Jones got a great grade.

That’s when real life crept up on him. From 17 on, Jones worked. He started doing day and night shifts toiling sometimes 14 hours at a warehouse, in charge of monitoring production lines. After that, he worked for Motorpoint as an apprentice car salesman. From there, he went to BCA, where eventually he became an online coordinator and aspiring auctioneer, based on his ability to speak in a rapid syntax.

His last day there, however, was theatric. 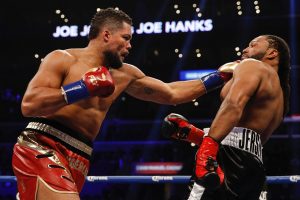 Jones had to be escorted off the property after someone, whom Jones held in contempt, muttered something under his breath. Jones wanted to get at him, but was grabbed before he could.

From there, he went from job-to-job, never really settling until he found boxing. His final job came as a car salesman.

On his last day, Jones was taking a perspective buyer out on a test drive. The buyer asked Jones if he knew anything about the car.

“I remember telling him, ‘No, I can give two, big piles of shit if you buy this car or not,’” Jones recalled, laughing. “I remember he couldn’t believe what I said. I didn’t even know how to pop the bonnet. I’m sure the customer didn’t have too many nice things to say about me, but I didn’t care at that point.

“I walked off and left. I worked many jobs, but I felt like I had underachieved in my life. I knew I had more about me. I’m not the most intelligent guy in the world, but I definitely have a biggest pair of balls that you can imagine, not that anyone would want to see them.”

He decided to apply himself.

That’s when he found boxing.

Jones had been getting chummy with Peter Fury, Tyson Fury’s uncle and former trainer. Through Peter Fury, Jones got to know female fighter Savannah Marshall, the only woman to ever beat Claressa Shields.

This prompted Jones to come up with an idea: Why not get Marshall on the Floyd Mayweather-Conor McGregor undercard in August 2017 at the T-Mobile Arena in Las Vegas?

“I had to move fast; I told Savannah that I could do something for her and I knew it was a long shot to reach Floyd,” Jones said. “It was crazy, but luckily, DeShaun followed me back on Instagram and he set up a meeting with me and Floyd.”

Mayweather Promotion’s Gervonta Davis was coming to London to fight Liam Walsh on May 20, 2017. That opened the door for Jones to have a five-minute meeting with “Money.”

“I remember before leaving telling my mom and dad that I didn’t want to work nine-to-five jobs anymore, and I was going to meet Floyd Mayweather,” Jones said. “My father looked like he wanted to put me in a padded room for three years. It’s like your daughter coming up and telling you she wants to meet Beyoncé to get a record deal.

“That’s as crazy as it gets. My mom just said, ‘Do you want me to make you a packed lunch to take to London?’”

Jones went to London in a cheap £60-pound gray suit. He’s kept it to this day.

“I would get thrown out of GQ Magazine if I wore that,” he said. “I was auctioneering in front of Floyd; I talked that fast.”

Mayweather introduced Jones to Leonard Ellerbe, CEO of Mayweather Promotions. Together, they brokered a deal to get Marshall on the Mayweather-McGregor undercard.

“I never earned a penny off that deal; I wanted to prove my worth to Savannah and she took a chance with me,” Jones said. “I always knew I had a good brain for boxing. That was an amazing first step.”

He came to secure to Joyce, the 34-year-old silver medalist in the super heavyweight class at the 2016 Summer Olympics, losing in the final on a split decision to Tony Yoka, of France, in Rio de Janeiro.

“Sam impressed me with what he knew about the business side of boxing, and we’re around the same age,” said Joyce, who has a fight coming up on July 25 against Michael Wallisch (20-3, 13 KOs) from the BT Sport Studio, in Stratford. “I think it’s the dynamics of our relationship that makes it work. Sam gets the job done. Adam comes from the legal side of things, and we all make a good team.

“He’s very hands-on in the way he manages. Now-a-days, I have my own room. I deserve my own room now. There’s one benefit, too. If I’m on my back, I snore. If I’m on my side, I’m silent. Sam usually goes to bed really early, so I don’t have to worry about him waking me about my snoring.”

Where he goes from here is up to him.

“Sam is not afraid of coming forward,” said Hall of Fame promoter Frank Warren, letting out a laugh. “Sam has a lot of confidence. Time will tell whether Sam makes it. Boxing is an unforgiving business, but I do like working with him. He listens.

“If he keeps doing what he does, he has a good chance of making it in this business. Sam has risen quickly. The fighters he has like him, and Sam is a very good salesman. He looks after his fighters and he’s done a very good for them.

“If Sam continues to have that attitude, giving his fighters the kind attention that he does, he will make it. The more successful you get, the more fighters he’ll attract.”

Today, it’s Jones who is the one distributing the ‘noes.’ He’s willing to keep his client list tight—for now.

“If you have someone getting hit in the head for a living, they deserve all of your undivided attention,” he says. “We may expand our roster, but right now, we’re not thinking about it. I like who we have.”

In the meantime, when driving by himself, the ‘noes’ may creep back into his thoughts. Only this time, it’s Jones knocking them down one at a time.

“I don’t think I’m a plugger anymore,” he says.