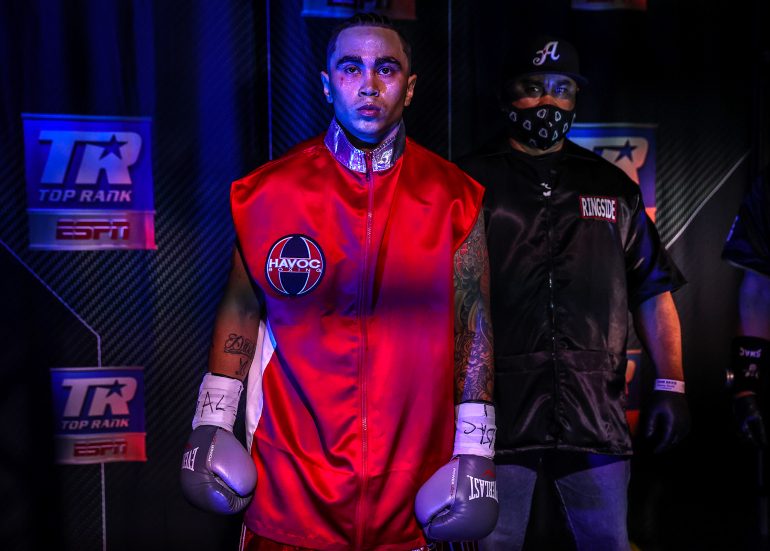 There was a time when great things were expected of Kenny Davis Jr. Then, there were drugs. There was drinking. In 2017, his father, Kenneth Davis Sr., thought he was going to see his son sucked up by the streets.

Gradually, Davis Jr. got his life back. Thursday night offered him another chance, when he started the Top Rank show at the MGM Grand Conference Center in Las Vegas, Nevada, against Eduardo Sanchez in a scheduled four-round lightweight fight.

Davis Jr. (3-2-1) won by a majority decision, winning his third straight thanks to a pair of 38-36 scores from Max DeLuca and Lisa Giampa. Judge Natalie Tyrell had it even at 37-37.

Davis Jr. landed a good right to the body in the third. It didn’t deter Sanchez (2-3). He kept coming forward and landing. With :36 left in the third, Davis Jr. dropped his mouthpiece, forcing referee Robert Hoyle to call timeout. The brief break changed the course of the fight, it seemed.

With :17 left in the third, Davis Jr. lowered a right to the body, and Sanchez in almost a delayed mode, took a knee. While down, however, Davis Jr. landed another right to the face, which knocked Sanchez down—and went unheeded by Hoyle.

In between rounds, after seeing a replay, Hoyle did go over and warn Davis Jr. about hitting Sanchez when he was down.

Sanchez looked like he was going to go up two rounds to one in the third when the knockdown arrived.

Lowering his right elbow to protect his right side, Sanchez was on the retreat. The knockdown seemed to infuse a burst of adrenaline in Davis Jr. He kept going to the body. With :32 left in the fight, Davis Jr. lost his mouthpiece again. This time, Hoyle saw enough and deducted a point from Davis Jr. for losing the mouthpiece.

As the knockdown gave Davis Jr. a boost, the point deduction brought Sanchez a little pump.