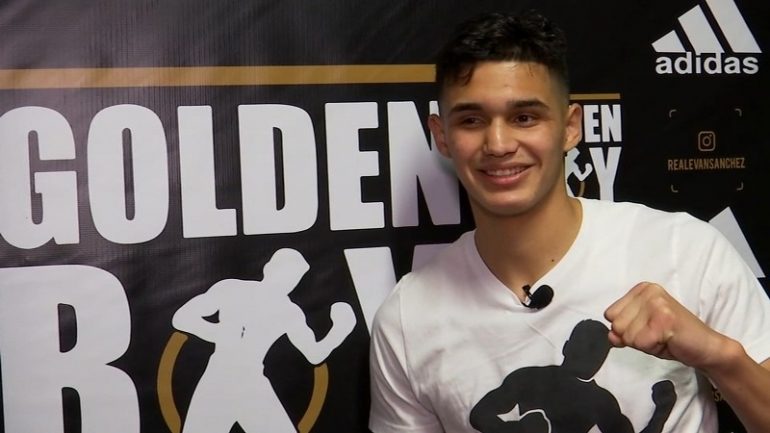 Six months ago, Evan Sanchez nearly quit boxing over not being signed to a world-class promoter.

With a record of 6-0 (with 5 knockouts) at the end of last year, the 6-foot, 147-pound Sanchez thought he had done enough to join the club.

Frustration had begun to settle in but Sanchez kept telling himself that his hard work would eventually pay off if he stayed dedicated.

Even if he failed in his endeavor, at least he could say he tried his best.

“Don’t quit,” he told himself. “If you quit, then you’ll never know what you were capable of.”

That dream became a reality. However it was not by design.

The prospect whom De La Hoya was coming to see was laying on the canvas after taking a wicked shot from Sanchez. Then he pointed and asked, ‘”Woah. Who is this kid?”

One punch can change everything. That is boxing and that moment changed Evan Sanchez’s life.

“I know it seems like I was impatient,” he admitted, “but I’ve been boxing since I was eight years old, so it had been a good 13 years of trying to get noticed. That can put a toll on you for sure but I’m here now.”

Sanchez (7-0, 6 KOs), 22, of Parlier, California, made his Golden Boy debut on February 14 in support of the main event featuring former lightweight titlist Jorge Linares taking on Carlos Morales at the Honda Center, in Anaheim, California.

His new bosses showed Sanchez plenty of love after he scored a second round knockout of Daniel Evangelista Jr.

“They told me that I had a great future ahead of me,” Sanchez recalled. “They wanted to move forward with me and that is all I have ever dreamed of – to be recognized.

“And to be partnered with Golden Boy, it means the world that they see so much in me.”

That love and appreciation was on display once more on Wednesday afternoon, when Sanchez learned he would fight in the opening bout of Golden Boy’s highly-anticipated return on July 24 following the COVID-19 hiatus at Fantasy Springs Resort Casino, in Indio, California.

Sanchez will square off against 32-year-old Issouf Kinda (18-4, 7 KOs), a native of Burkina Faso, in a bout scheduled for six rounds.

“I have been in the gym prepared and ready for this fight,” Sanchez stated. “On July 24, I’m coming to win.”

In hindsight, Sanchez is very grateful to be in the position he is today, especially given the circumstances prior to the coronavirus shutdown.

“If I quit boxing, I don’t know what I would be doing right now,” he added. “When Golden Boy noticed me, things have taken off and I couldn’t be more thankful for that.”