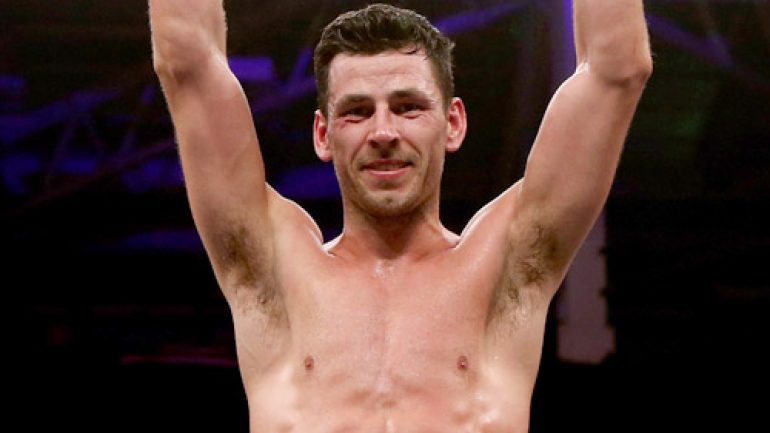 Darren Barker is a content man and reiterated his love for life more than once when he spoke to The Ring earlier this month about his life after boxing.

Now 38, with three children and another on the way, the former IBF middleweight belt holder officially retired from the sport in January 2014, a month after losing the first defense of his title against Felix Sturm. It was a painful exit from a nine-year professional career which brought him British, European and, in such memorable fashion, world honors.

After a crippling body shot knockdown at the hands of Daniel Geale in Round 6, Barker rose from the ashes to edge out the Australian via split decision to take the title. It was a Rocky moment that became flooded in emotion such was Barker’s desperation to win a world title for his brother Gary who had tragically died in a car accident in 2006.

The dream had been realized, and the eventual loss to Sturm, thanks in large part to the hip injuries that had troubled Barker for years, still could not deter from the fact that he achieved what he set out to achieve. While there was disappointment after losing in Germany there was also relief that the story was over.

“It was a strange sort of time for me if I’m honest,” Barker reflected. “I’d achieved my ultimate goal for me, my brother, my family and I’d persevered for an awful long time and struggled through injuries. Lot of people say, ‘Oh, you went into the Sturm fight injured.’ I went into the previous six fights injured! If you name me a boxer that is 100-percent fit when they’ve boxed as long as I had, I’ll tell you that you’re lying because I don’t think there is such a thing.

“For me it was just pure relief,” he continued. “I was happy it was all over. I believed I could beat Sturm. I believed once the bell went I would do what I do best and that’s box and fight. I just believed I had enough to beat him, but the body packed up… and the desire and the hunger had faded slightly. I was gutted because like I say, I did think I could beat him. Straight after the fight, the doctor was checking my hip because it popped out which is near-impossible to do, so you can imagine the pain that I was in. [My trainer] Tony [Sims] and my dad come in and I just said to them both, ‘That’s my lot’ and they agreed. They were both relieved and both happy that it was over because I had been through a lot with my family and Tony. I had experienced blood, sweat and tears with Tony. We had been through a lot, me and Tony are extremely close, but I know at that stage, at that time, he was happy it was all over.” 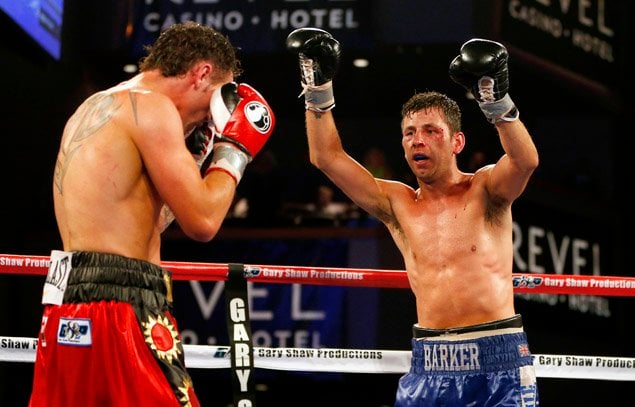 Barker (right) on his way to lifting the IBF middleweight title from Daniel Geale. Photo by Rich Schultz/ Getty Images

Thankfully, the injuries that hampered his career are a thing of the past. Barker’s life after boxing does not consist of a rigorous training regime punishing the body till it can take no more. While he admits he will never be 100-percent free of niggles the body is holding up much better than it used to after two successful hip operations.

“It’s nice to be living without any pain.”

Barker recalled going to the gym as a kid, observing older men who were complaining about aches and pains in their body because of injuries that are part and parcel of boxing.

“Fast-forward 15-20 years I was that man moaning about injuries. I’m at peace with the Sturm fight because I know how my body and my mental state was at the time.”

There was a rematch clause to fight Sturm again. A confident Barker is certain that he would have beaten Sturm had he been in the best condition possible, but injuries take their toll. Barker was struggling and spent some time on crutches afterwards, and he also questioned his motives behind fighting Sturm again.

“Revenge, yes but that wasn’t what my journey was about. My career was about winning a world title.”

“Content” was a popular word during the interview, a reflection of Barker’s positive state of mind, but, as he explains, contentment – as a professional boxer – brings danger.

“You’ve got to have that fire and that hunger, and it had left me. I just didn’t want to do it anymore.”

Nowadays Barker has his 12x3s gym in London, one of two that also operate as fitness gyms. Boxing is still an integral part of his life. Working alongside commentator and host Chris Lloyd, the two friends have a chemistry, like a buddy cop movie, that sees them bounce off one another while presenting Matchroom’s Before the Bell online boxing show.

“It’s my ultimate job, I absolutely love it. I get to be around the [boxing] shows with my friend Chris Lloyd, who I do the shows with. I get to commentate on these amazing fights.”

Barker’s personal life, as well as his working schedule is a busy one, but boredom does kick in. He is purpose-driven and admits to needing a goal in life. After winning the European title first time around, against Affif Belghecham, Barker told The Ring that he could have retired there and then, but the goal of winning a world title remained his purpose.

“I do struggle with the fact that I don’t have a long-term goal,” he said. “There is no career goal that I’ve set myself. In some respects, I like that because I don’t put pressure on myself. Where I’ve been, I was so used to having this goal and this purpose, so I kind of miss having that to aim for. If a Queen Bee dies or goes missing the rest of the workers aimlessly fly around, they don’t really have a purpose. In some ways that sounds a bit drastic because my purpose is being a dad, a good dad to my kids and a husband, but I don’t really have that career goal that I sometimes miss. It is nice not having to have a discipline or anything like that, though.”

Barker dipped his toes in the training pool last year, working the corner of British heavyweight Dave Allen. It was a one-time thing, a job that Barker does not wish to return to until the timing is right. And, perhaps, he says it will be more about giving back to a famous London gym that nurtured and developed Barker as a youngster and played its part in the Brit going all the way to world glory.

“I’d love to give back to the kids at Repton Amateur Boxing Club.

“I think it’s important to give back to the grass roots of boxing because without those foundations, the most valuable foundations you can have, I don’t think the sport could flourish in Britain. I think it’s important for myself or other past fighters or people that are knowledgeable in the sport to give back to the kids, to keep the future of British boxing on a high.”

The present day sees Barker wanting to learn another language and continuing his flying lessons to become a qualified pilot. These could become the long-term goals he needs. He may not have found his calling in his life after boxing, but Barker doesn’t see the sense in rocking the boat. If it ain’t broke, don’t fix it. Over complicating his life is not on the agenda because right now happiness is everything to Darren Barker and he has it in abundance.