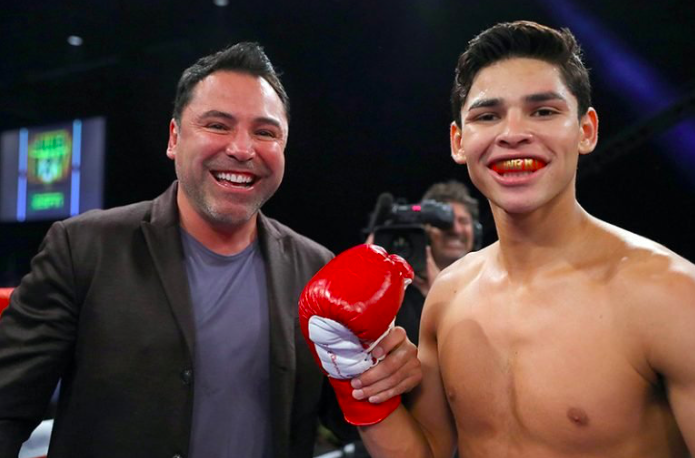 Big smiles from Oscar and King Ryan Garcia after a W. But outside the ring, there's been on again-off again sparring between fighter and promoter.
10
Jul
by Ryan O'Hara

Young gun Ryan Garcia has once again gone public with his feelings that he’s not on the same page with his promoter, Golden Boy Promotions.

Garcia turned down a $200,000 offer to fight on a Fourth of July card at the Fantasy Springs Resort in Indio, California. The Ring’s No. 5-rated 135-pounder wanted at least $500,000, according to a story written by Mike Coppinger, on The Athletic platform.

Company chairman and CEO Oscar De La Hoya, in an exclusive interview with The Ring’s Cynthia Conte last month, said that fighters today need to understand that we live in different times.

“When you don’t want to fight somebody, you price yourself out,” De La Hoya said to Conte (above), speaking in context of this coronavirus era. Conte asked about what would be next for Canelo, and who he might face. “These fighters are pricing themselves out,” Oscar said, when asked about potential foes for the red-head. The absence of patrons on site removes a source of revenue to those involved.

“And unfortunately, a lot of these fighters are getting a lot of bad advice, and they aren’t realizing that, again, we’re living in different times (pandemic). You can’t be making the same (amount of money), it’s just impossible.”

So, yes, the businessman can deliver the message of what he deems ‘the new reality’ regarding purses for pugilists toward a few different directions.

“We’re living in different times….There’s millions and millions of people who have no jobs, and how are they gonna pay for that fight?” De La Hoya noted to Conte, when discussing the possibility of a Ryan Garcia pay-per-view outing. Oscar in his counter-punch spot more so singled out people around Garcia, like his counsel, rather than the boxer himself,

The former five-division titleholder had taken a jab at Garcia in a June 15 Tweet for not accepting the July 4 fight and went on to label welterweight prospect Vergil Ortiz Jr. as the future of boxing.

Garcia (20-0, 17 KOs), age 21, of Los Angeles, who has 8.4 million followers across social media platforms Instagram and TikTok, was bothered by his boss’s comments.

“When I was little, I would look at him and thought he was the greatest guy in the world. And now I look at him like, ‘He really doesn’t care.’ On a personal level, (it hurts) because I looked up to him. I look like him – like come on now. I even look like the guy. Everybody compares me to him. Now it’s like, all right, that’s cool and everything,” Garcia told The Athletic.

Like Garcia, De La Hoya was also involved in a feud with his original promoter, Bob Arum. That dynamic contributed to the creation of Golden Boy, which De La Hoya promised to be a fighter-first company. Garcia to Coppinger accused De La Hoya of going back on his company’s mission.

“He actually doesn’t fight for the fighters now; he’s fighting for himself as the promoter. He’s the Bob Arum to his Oscar. He doesn’t want to admit that. He keeps on playing himself and playing me.”

Garcia has not fought since delivering a Valentine’s Day first-round knockout of Francisco Fonseca (see below) on a DAZN-streamed card in Anaheim, California.

Chatter on the grapevine indicates Team Garcia is now focusing on a fight pitting young Ryan against England’s Luke Campbell (20-3, 16 KOs) in a WBC-mandated title-elimination bout.