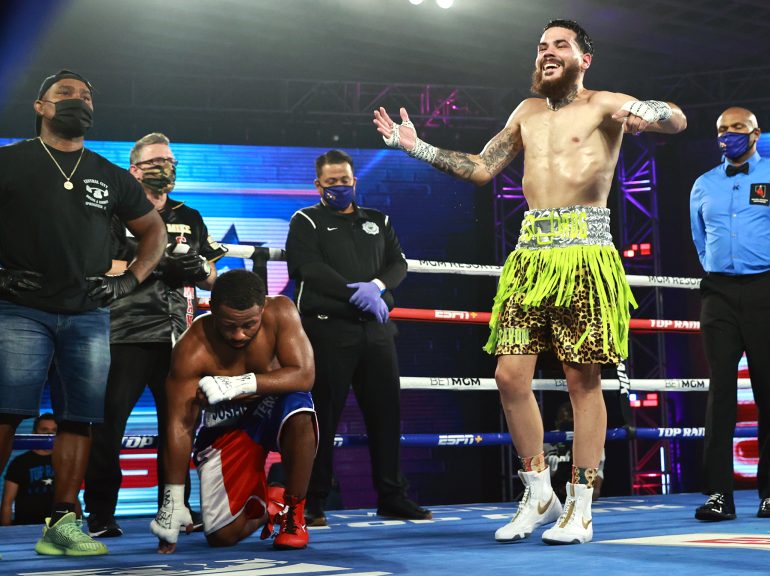 Junior lightweights Joshafat Ortiz and Joshua Orta put on an entertaining fight on Tuesday at the MGM Grand Conference Center in Las Vegas.

Ortiz (8-0, 4 knockouts), 24, a Puerto Rico native based in Reading, Pennsylvania, was in control of the first part of the action, but Orta made it close in the last few frames.

But it wasn’t close enough as Ortiz held on for the majority decision victory to remain undefeated. Judge Dave Moretti scored the fight 57-57. But he was overruled by Adelaide Byrd and Tim Cheatham, who had it 58-56 for Ortiz.

The fight took place on the undercard of the 10-round Top Rank on ESPN main event between heavyweights Carlos Takam and Jerry Forrest.

Both men fought in close quarters for much of the first frame, but it was Ortiz who controlled the pace from the onset, working behind his jab, and connecting with left hooks to the body.

Before the start of the second round, Ortiz’s corner told their pupil, “You looked great out there. Keep boxing.” He did that, sticking his adversary with the jab, and going downstairs with the left hook to the body of Ortz. By the end of the round, Orta’s mouth was open, and he was hesitant to throw punches.

Thirty seconds into the third round, Orta threw a 10-punch flurry with Ortiz against the ropes, but only managed to land a single punch during the exchange. With 1:30 left, Ortiz was dancing around the ring, landing with stiff jabs and left hooks to the head.

Orta smothered Ortiz against the ropes about a minute into the fourth round and connected with a series of body shots. Then the action returned to the center of the ring, which Ortiz controlled.

Orta, of Springfield, Massachusetts, had a better showing in the fifth round. With about 45 seconds remaining, he connected with a big left hook to the head and followed up with a clean straight right to the body. An accidental head clash also opened up a cut over Ortiz’s right eye.

In the sixth and final round, both fighters poured it all on the line. Ortiz had success when he was on the outside, landing with a series of jabs to the head and the stomach, but Ortiz cut off the ring and made things interesting. The 24-year-old connected with a series of body shots with less than a minute remaining.

Some swelling had begun to develop on Ortiz’s right cheekbone. At the end of the fight, both fighters hugged it out, and Orta let out a massive, “WOOOOOO!”

But it was too little, too late for Orta, who suffered his first loss as a pro. His record stands at 6-1 with two knockouts.