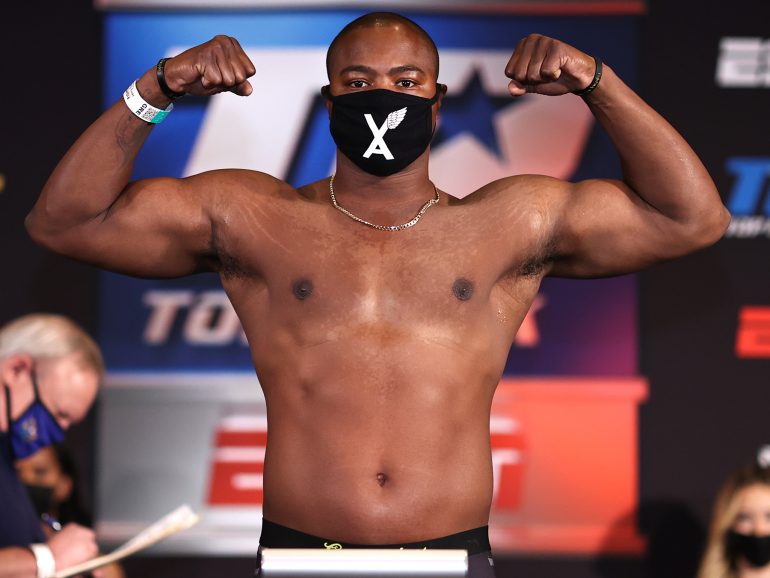 Sometime Thursday night, Jerry Forrest may see the specter of Brey again. Only this time, Brey won’t come up from behind and punch him in the back of his head.

This time, Brey will be embodied in 39-year-old Carlos Takam when they meet in a 10-round heavyweight main event at the MGM Grand Conference Center in Las Vegas, Nevada (ESPN, 8 p.m. ET/ 5 p.m. PT).

The hostility trigger is there. It’s always been there. Since birth. Forrest knows when to turn it on and off.

The 32-year-old Forrest just has a problem when someone puts their hands on him—like the teenaged fool Brey did one Friday morning in first-period honors English.

“I’m a gentle giant, I’m very monotone, but I can tell you right now, it’s going to hurt to the core to beat someone 39 years old to a pulp,” warned Forrest, who lost to undefeated prospect Jermaine Franklin in July 2019 by split-decision in a fight many thought Forrest won. “I don’t want to do this. But, for my family’s sake, I have to knock him out.

“If this fight goes 10 rounds, he will have concussions.”

Maybe not the kind of concussion Brey suffered when he tried Forrest over a silly high school dispute that spilled over into something serious.

Forrest, who is promoted by Hall of Famer Lou DiBella, grew up in Newport News, Virginia, wedged between uptown and downtown. He knew Crips and Bloods, but he also knew enough to stay clear. His father is a master chief petty officer in the U.S. Navy. His mother works for the CIA. Forrest (26-3, 20 knockouts) himself is a nuclear electrician in the Newport News U.S. Navy shipyard.

But when he was a senior at Woodside High School, where he starred as a basketball and football player, he intervened one time to avert a fight. Forrest, a 6-foot-1 southpaw who weighed 225.6 pounds Wednesday for the Takam fight, prevented a kid from jumping an eighth grader.

The kid, Brey, happened to be a Blood.

His ego bruised, Brey, all 5-foot-9, 150 pounds, would let Forrest know the next day. Sitting two rows behind him, diagonally to the left, Brey approached Forrest about fighting. Forrest told him after school. Brey persisted. He lunged at Forrest, punching him in the back of the head.

That lit up Forrest.

He smashed Brey. He pounded him so bad, he broke his eye socket, cut him up with his fists. Brey tapped out.

Forrest walked to the principal’s office without being told.

Brey was carried out of school on a stretcher.

“When I grew up, fighting was normal,” said Forrest, who spent his formative years in Abbeville, Louisiana. “I was never scared to fight, because it was just the structure where I grew up. When you’re in an environment like that, even though you’re not that kind of person, you fight.

“I knew there was a fight coming the next day I went to school. I even told my mother I didn’t want to go to school that day. But my mom is a fighter. She forced me to go. We were reading poetry in honors English, and I remember telling the teacher, ‘Let’s just read the poetry.’

“As soon as I said that, Brey hit me in the back of the head. I had gold teeth. I took my gold teeth out and began whaling away.”

It didn’t take long for Brey to admit he had enough. Still, Forrest had to nail him one more time.

As he walked to the principal’s office, Forrest was told he had blood all over him—Brey’s blood.

The incident exploded into a full-blown riot in the area. Soon after that, his girlfriend, now his wife, asked him what he wanted for his 18th birthday. He told her two pair of boxing gloves. The beef even escalated into one of Forrest’s friends, Javon, being shot and killed.

“I remember my father asking me what I wanted to do, and that’s when I told him that I wanted to go into boxing,” Forrest said. “I’m friends with all of those guys now. I had no issue with those kids before. I saw an eighth-grade kid about to get jumped. That’s when I stepped in.

“Maybe it’s why I would have loved to fight someone like a (Jarrell) ‘Big Baby’ Miller (who Forrest was originally supposed to fight, before Miller tested positive for PEDs). Truth always prevails, and he wants to be a villain. Anyone who tells you that they’re a villain, isn’t a villain.”

Forrest, the father of three ranging in age from 2 to 13, arrived in Las Vegas on Monday. He knows this is the opportunity of a lifetime.

“I never had a promoter up until now. I had no free passes,” Forrest said. “I wanted to get here on my terms and that’s what I’ve done. I feel good. I feel ready.”