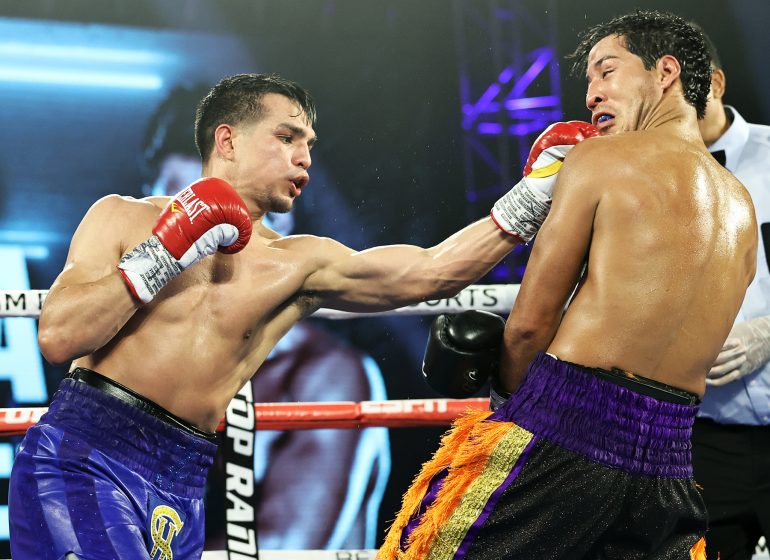 Jose Zepeda did not get the knockout that he predicted, but he still won in dominating fashion.

Zepeda won a unanimous decision over a game, but outclassed Kendo Castaneda on Tuesday at the MGM Grand Conference Center in Las Vegas.

Judge Patricia Morse Jarman scored it 97-93, while Dave Moretti and Tim Cheatham had it 98-92, all for Zepeda, who called out 140-pound titleholders Josh Taylor and Jose Ramirez after the fight, though he did not name any of them individually.

Scotland’s Taylor (16-0, 12 knockouts), 29, claimed the vacant 140-pound Ring Magazine championship and added the WBA junior welterweight title to his IBF version with a 12-round majority decision over Regis Prograis at The O2 Arena in London last October.

Ramirez, a 2012 Olympian, defeated Zepeda by majority decision in February 2019 in a bout that some thought should have gone to Zepeda.

Prior to the fight, Zepeda told The Ring that he wanted to face both fighters.

“A rematch with Ramirez will eventually have to happen,” Zepeda said. “I’m always going to be here knocking on the door. If a fight with Ramirez doesn’t happen, I would love to step in there with Josh Taylor.”

A victory over Castaneda was another step in the right direction for Zepeda, who also outpointed former 135-pound titleholder Jose Pedraza last September in what was considered an upset victory.

The sharp southpaw Zepeda connected with several straight left hands in the opening round. Castaneda briefly went southpaw himself to throw off his opponent.

Zepeda found more success in the second round as he landed with a right hook. Castaneda, who is usually a pressure fighter, struggled to find opportunities.

Zepeda continued to expose Castaeda in the third round, landing a right hook and a straight left hand in the final minute.

Zepeda continued to display his dominance in the fourth round. He consistently landed straight left hands to the gut of Castaneda, who also got clipped by a left uppercut later in the round, and a series of follow-up lefts and rights.

The 31-year-old Zepeda was initially set to face Ivan Baranchyk (20-1, 13 KOs). However, the Russian was forced to withdraw after suffering a rib injury during a sparring session.

“He can get hit,” Zepeda said of Castaneda. “It was a good performance; I can do better. Every time when the level (of competition) goes up, I go up, too.”

With about 1:50 left in the fifth frame, Zepeda landed with a left uppercut and a follow-up left hook to the head. Castaneda, though, continued to come forward and applied pressure.

Zepeda (32-2, 25 knockouts), of La Puente, California, began to taunt Castaneda in the sixth round. With about 1:40 remaining, he let his hands down and seemingly allowed his opponent to hit him with a couple of jabs. Then Zepeda raised his head as if to say, “Is that all you got?”

Zepeda connected with a solid straight left hand that knocked Castaneda back as the one-sided display continued.

Zepeda continued to break down Zepeda in the seventh round. He worked effectively behind his jab and with 2:15 remaining, connected with a two-punch combination, a left hook to the body and a left hook upstairs. Zepeda then drove Castaneda into the ropes with another left hook to the head.

With 1:31 remaining in the ninth round, referee Tony Weeks called time when the tape on Castaneda’s glove had come undone. At that point in the round, both fighters had done respectable work. Zepeda backed up Castaneda to the ropes and landed with a straight left hand and a right hand to the body. Castaneda also fought off the ropes well and landed with a quick flurry, including a left hook to the head of Zepeda.

Zepeda coasted in the 10th and final round. With about 1:40 remaining, Castaneda connected with a short right uppercut but was warned by Weeks after connecting with three consecutive low blows. ESPN color commentator and former two-division world titleholder Andre Ward remarked, “I don’t think that was intentional.”