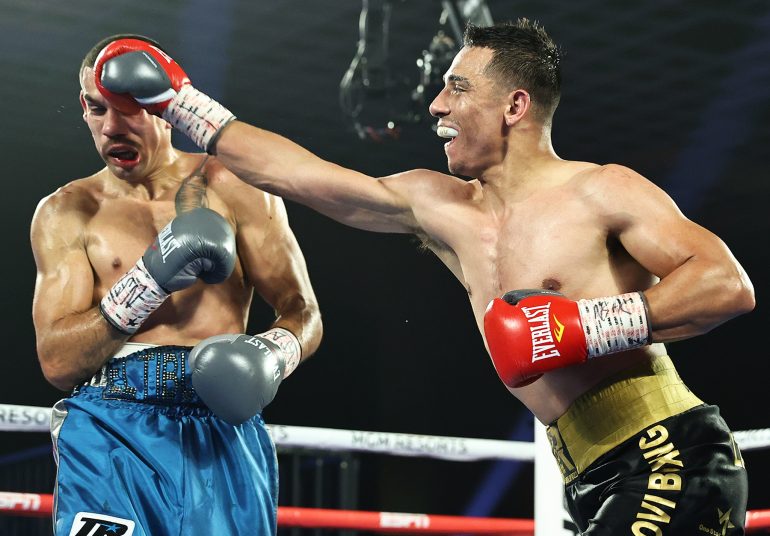 Lopez had Vences out on his feet in the sixth round after dishing him a serious punishment, but Vences showed an incredible combination of courage, grit, and resilience to survive.

But despite nearly getting stopped, Vences appeared to have done enough to win, but the judges saw otherwise.

Judge Max DeLuca scored the fight 96-94 for Vences, but Eric Cheek and Tim Cheatham had it 96-94 for Lopez, who improved his winning streak to four fights.

Vences thought he won the fight, but maintained a positive attitude speaking with ESPN’s

“I thought I edged the fight,” he said. “I felt really lost in the (sixth) round when he kinda buckled me. It was a deep round.”

The fight served as the chief support to the 10-round Top Rank on ESPN main event featuring junior welterweights Jose Zepeda and Kendo Castaneda Tuesday evening at the MGM Grand Conference Center in Las Vegas.

According to Compubox punch statistics, Lopez outlanded Vences, but the latter was more accurate. Lopez connected with 170 of 656 total punches (26 percent), and Vences landed 162 of 580 blows (28 percent).

Vences was the aggressor to begin the fight, but Lopez connected with a series of jabs.

In the second frame, both fighters traded jabs. Vences landed with a short right hand late in the round.

With less than a minute remaining in the third round, Vences (23-2-1, 12 KOs), of San Jose, California, caught Lopez with a right hand when he was against the ropes.

Vences worked well off his jab in the fourth round and sporadically found the target with his right hand. However, the 29-year-old appeared that he was slowing at this point in the contest.

Lopez took advantage late in the following round and caught Vences with a short left hand that knocked him off balance. Then a huge clash of heads caused a cut above both Lopez’s right eye and Vences’ forehead with roughly 1:20 remaining in the frame.

In the sixth round, Lopez connected with a right hand that clearly hurt Vences. Then he followed up with a crisp right uppercut that caused Vences’ legs to buckle as he tried to clinch. Visibly hurt, Vences turned to low blows, ignoring the first warning from referee Kenny Bayless, until the longtime referee stepped in and sternly admonished him.

“I’m very proud of myself (for surviving that round),” Vences said. “From the rounds I got hurt, I felt like I edged it.”

Vences woke up in the seventh round and knocked back Lopez with a four-punch combination, but another clash of heads opened up a cut over Vences’ left eye. Bayless then called time for the ringside doctor to examine the cut.

Lopez had a solid eighth round as he backed up Vences with a right hand with nearly a minute left in the frame. Vences came back with a counter left hook that snapped Lopez’s head to the side.

Before the start of the ninth round, Lopez’s corner urged their fighter to feint with the left and to blast Vences with the right. But it was Vences who appeared to have controlled the action. He drilled Lopez with a right with about 50 seconds remaining in the round.

Blood streamed down Vences’ face throughout the 10th, and final round from the deep gash suffered earlier in the fight and had appeared to have overcome a tremendous amount of adversity to seal the victory, but Lopez did enough to sway the judges.