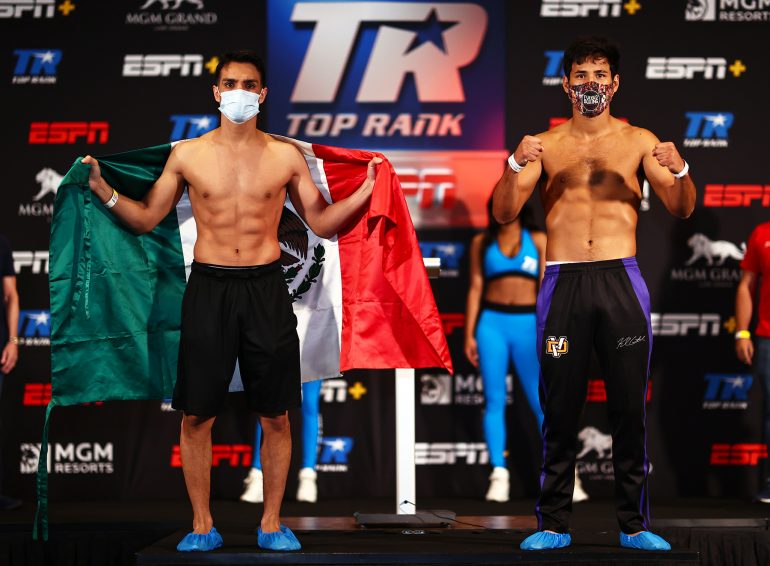 Jose Zepeda is ready to capitalize on the biggest victory of his career when he takes on replacement opponent Kendo Castaneda on Tuesday evening.

Zepeda tipped the scales at 143¾ pounds for his 10-round welterweight bout against Castaneda Monday afternoon. Castaneda, who took the fight on seven days’ notice, also checked in at 143¾ pounds for their Top Rank on ESPN main event that the network will televise from the MGM Grand Conference Center in Las Vegas.

Zepeda, who regularly campaigns at junior welterweight, is coming off an impressive upset victory over former lightweight titlist Jose Pedraza, who he outpointed last September in Las Vegas on the undercard of the Tyson Fury-Otto Wallin fight.

The 31-year-old Zepeda (31-2, 25 knockouts), of La Puente, California, was initially set to face Ivan Baranchyk (20-1, 13 KOs). However, the Russian was forced to withdraw after suffering a rib injury during a sparring session.

“We were prepared to face Baranchyk, but he got hurt, but we had a great training camp, and I feel that this is going to be my best performance so far.”

Castaneda (17-1, 8 KOs), 26, of San Antonio, Texas, is coming off his first loss as a pro in February when he dropped a majority decision to Yomar Alamo, who he admitted to underestimating.

“I just don’t think he has the experience against solid opposition,” he continued. “He has a big heart, but he hasn’t fought anyone at the championship level.”

But Zepeda assured that fight fans would be in for a good show.

“It’s going to be a good fight for the fans. Castaneda brings a lot of energy, and he is very determined,” he said. “But he has never felt a punch like mine, and I feel like it is going to be a whole different world for him inside the ring.”

While he has a lot of respect for Castaneda for taking on a tough fight on short notice, Zepeda doesn’t see the bout going any other way but in his favor.

“Like I said, he brings a lot of energy, and I commend him for taking this fight,” he added. “But either way, I’m going to win by knockout.”

If Zepeda is victorious, he will pursue a rematch with now-unified junior welterweight champion and The Ring’s No. 1-rated contender Jose Ramirez, who edged him by majority decision in a February 2019 title fight in California.

“A rematch with Ramirez will eventually have to happen,” Zepeda said. “I’m always going to be here knocking on the door. If a fight with Ramirez doesn’t happen, I would love to step in there with (The Ring world champion) Josh Taylor.”