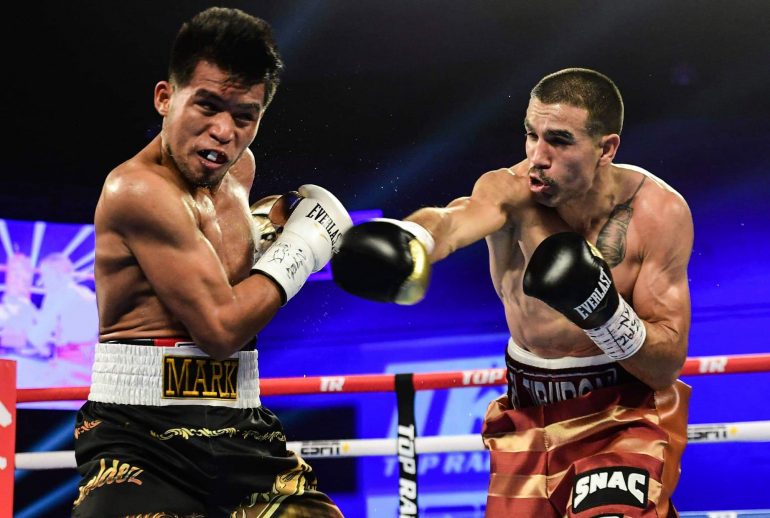 Junior lightweight Andy Vences has one loss on his record, to the unbeaten Albert Bell, which took place in June of last year.

A rematch to avenge that setback is important, but Vences may be in the running for a world title bout beforehand.

For that to happen, Vences must first get past Luis Alberto Lopez on Tuesday at the MGM Grand Conference Center in Las Vegas, Nevada. The 10-round bout will air live on ESPN and ESPN Deportes (8 p.m. ET/ 5 p.m. PT).

Vences (23-1-1, 12 knockouts) has not fought since defeating Mark Bernaldez of the Philippines by eight-round unanimous decision on October 26.

The 29-year-old is not disputing the scoring of the Bell fight but acknowledges that he could have done a better job of listening to his corner.

“I could’ve listened more to my corner that night,” Vences told The Ring over the phone Friday morning. “I should’ve pressed the fight from the beginning. I was coming on late, and if the fight was scheduled for 12 rounds, then it would’ve played out differently. There’s a reason they say, ‘Whatever the coach says, the athlete listens.’”

Vences would not mind fighting Bell again but not anytime soon.

“I’m willing to fight anyone,” said Vences, who recently signed a management deal with Peter Kahn. “At the same time, if I fight him, I would like for it to be a 12-round fight. It seems he’s following in my footsteps, too. He just fought a guy (UD 10 Bernaldez) who I beat in October. I want the big fights, but that’s up to Top Rank and my manager.”

First, Vences will have to get past Lopez (20-2, 11 KOs) from Mexicali. In his last outing, on December 14, the hard-hitting prospect stopped Cristian Baez in his hometown and has won his last three fights since losing by decision to unbeaten featherweight Ruben Villa on May 10 of last year.

Lopez also pulled off a notable win as underdog on February 28 of last year when he scored a technical decision over then-fringe contender Ray Ximenez. Despite Lopez’s pedigree, his opponent believes he can still secure a stoppage win.

“He has the ability to throw a lot punches,” acknowledged Vences. “He jumps in and out, throwing four or five punches, and no one has had the ability to capitalize on that. I think his best defense is his offense and he throws a lot of punches. No one has been able to catch him. I’m not going to follow him around the ring. I’m prepared for whatever he brings to the table.”

Vences believes he can bring out big crowds to San Jose, California, where thousands would fill the SAP Center for significant Top Rank cards.

“Fighting in my hometown would mean everything to me,” he said. “It would be a dream come true. I would be honored to be the ambassador for the ‘408’ (area code). I was told that boxing would take place every weekend or every other weekend back in the day. We can make it happen again because that area has a lot of boxing fans. I would love to bring boxing back there, especially a world title fight, it would be an honor.”

A win over Lopez may put Vences in the top 10 of boxing’s sanctioning bodies. Despite the defeat to Bell, he remains confident that he can excel against any of the world titleholders in the 130-pound division.

“It’s very possible a world title fight can happen early next year,” Vences reiterated. “I believe fighting someone like [WBO titleholder] Jamel Herring would be great. We both fight for Top Rank. He was scheduled to fight Carl Frampton, but with all of these travel restrictions, I believe he can fight me.”

“I’ll fight anyone. I’m very focused. I just want to fight the best.”