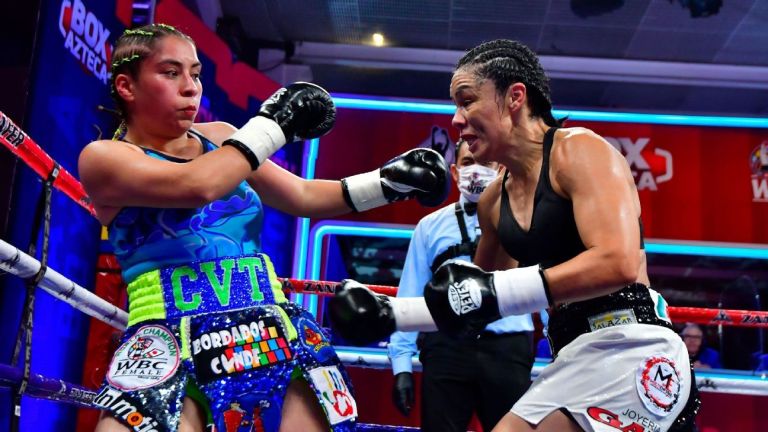 Jackie Nava scored a one-sided 10-round unanimous decision over Estrella Valverde on Saturday at the TV Azteca Studios in Mexico City.

Nava had not fought since battling to a majority decision draw against Argentina’s Marcela Acuna on May 25 of last year. The 40-year-old from Tijuana, Mexico, who has won world title belts at 118 and 122 pounds, entered this fight unbeaten in her previous 12 outings.

The 35-year-old Valverde was game from the opening bell but was simply outclassed by her more polished opponent. She went on the attack, initiating exchanges, but was continually countered to head and body.

The pace of the fight slowed significantly after the midway point. Valverde’s punch output dropped with each passing round and Nava stayed a step ahead, connecting with sharp hooks and right hands to the head.

“We did good work, but I believe I should’ve thrown more punches during certain points of the fight,” said Nava during her post-fight interview. “When I threw punches I was able to connect, and I was able to dominate (the fight).

“Valverde was a strong opponent; she threw a lot of punches. She would also lead with her head and I was worried she was going to hurt my head. There were headbutts but that is boxing.”

Nava hopes that a fight against Mariana Juarez will take place in the near future. There were preliminary discussions earlier this year but nothing materialized.

“That’s a goal of mine,” Nava confirmed. “I hope that a fight takes place this year, whether in front of a crowd or with no crowds in attendance. With regards to this pandemic we are in, if a fight takes place behind closed doors (with no fans), then the fight should take place immediately.”

Valverde, who resides in Ciudad Nezahualcoyotl, Mexico, drops to 18-6-2 (3 KOs).

In the co-feature, junior lightweight Mauricio Lara of Mexico stopped Alejandro Palmero in the opening round.

A left hook to the head staggered Palmero at the end of the first and Lara jumped on his dazed opponent, scoring a barrage of punches that led to the bout being stopped at 2:54

Lara has now won his last eight bouts since suffering a knockout loss to Eliot Chavez in May 2018. Palmero, who resides in Puebla, Mexico, drops to 8-6-1 (3 KOs).

Featherweight Irving Turrubiartes overcame a knockdown to stop veteran Hector Colin (9-13, 8 KOs) in the fifth round.

Turrubiartes (23-0, 14 KOs) dropped Colin with a left hook to the head in the opening round and decked him again midway through the second with a right cross.

Both fighters stood in the pocket over the next two rounds, trading combinations to head and body.

Midway through the fifth, a left hook stunned Colin and Turrubiartes’ follow up assault against the ropes prompted the stoppage at 1:57.

Fringe junior middleweight contender Carlos Ocampo was scheduled to face Jorge Luis Garcia on this card, however, the bout was postponed due to “Pancho” Valenzuela, trainer of Garcia, testing positive for COVID-19 on Friday. According to ESPN’s Salvador Rodriguez, Garcia is asymptomatic.