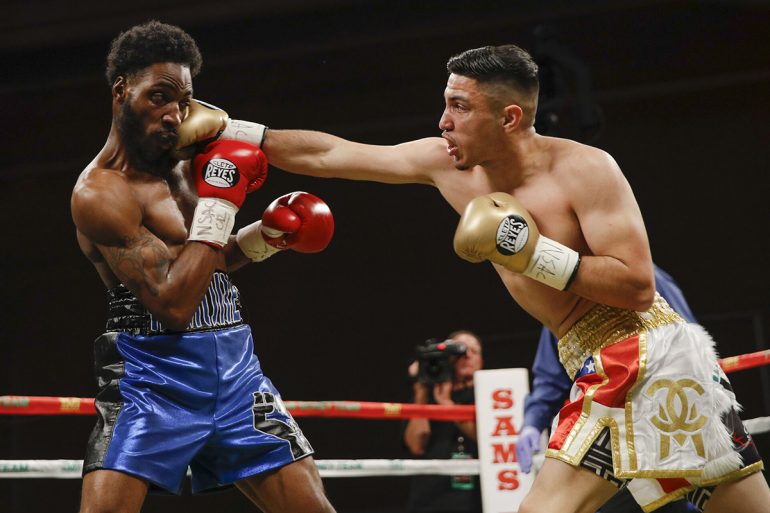 In the fall of 2016, a young boxer sought to get his feet wet against one of boxing’s hottest prospects.

A 19-year-old Andres Cortes stepped into the ring to spar against then-junior lightweight title contender Gervonta Davis, who had been signed by Mayweather Promotions within the past year and was on the cusp of his first title shot.

Not only did Cortes give Davis trouble, he also got the attention of Floyd Mayweather Jr., who, along with his company’s CEO, Leonard Ellerbe, signed Cortes to a promotional contract.

On December 2, 2016, Cortes made his debut with Mayweather Promotions in a four-round bout against Miguel Espinoza in Las Vegas, winning a unanimous decision in a shutout win. His unbeaten streak continued over his next eight bouts, which included five victories by knockout.

However, despite signing with Mayweather, Cortes has never been one to circumvent his values. From the time his family introduced him to boxing at the age of four, Cortes has always been an individual who has sought more significant and more challenging tasks.

On July 7 inside the Bubble at MGM Grand in Las Vegas, Cortes, who normally competes at 130 pounds will represent new promoter Top Rank when he takes on Alejandro Salinas in an eight-round bout contested at a catchweight of 133 pounds.

“The reason why I left Mayweather Promotions is because I wanted to fight more challenging opposition and to be in the position of getting bigger fights,” Cortes told The Ring. “I’m ready for the top contenders and all of the champions, and I feel that Top Rank would get me there faster than I would have at Mayweather Promotions.”

Cortes (12-0, 7 knockouts), 23, who is born and raised in Las Vegas, insists there are no hard feelings with his old promoter.

“It’s simply business,” he added. “Leonard Ellerbe and I have a great relationship; we talked a lot. But at the end of the day, I had to look out for myself and my own career, and I just felt like my career trajectory with Top Rank would work out the best for my interests.”

Cortes will take on Salinas, who has scored nine knockouts in 10 victories but has also been outpointed on three occasions.

“Salinas is an average fighter,” Cortes said. “I excel against fighters who come forward, and that’s basically the only thing he knows how to do. He’s not a bad fighter by any means, but he’s just not on my level.

“He has been knocked down (by lightweight prospect Oscar Duarte), but I will be the first one to knock him out.”

Cortes, who captured a silver medal at the 2013 Junior Olympic National Championships in Alabama, also added that he would remain a junior lightweight after the Salinas fight to challenge the best 130 pounders Top Rank has on their roster.

“I’ve been ready since January to fight the best,” he continued. “I’m ready for the top dogs and champions.

“I was ready to step up this fight, but things didn’t work out the way that I wanted, but now this is the time to show the world that these guys just aren’t on my level.”

The full card, which also features Andy Vences vs. Luis Alberto Lopez and Jose Zepeda vs. Kendo Castaneda will be broadcast live on ESPN.