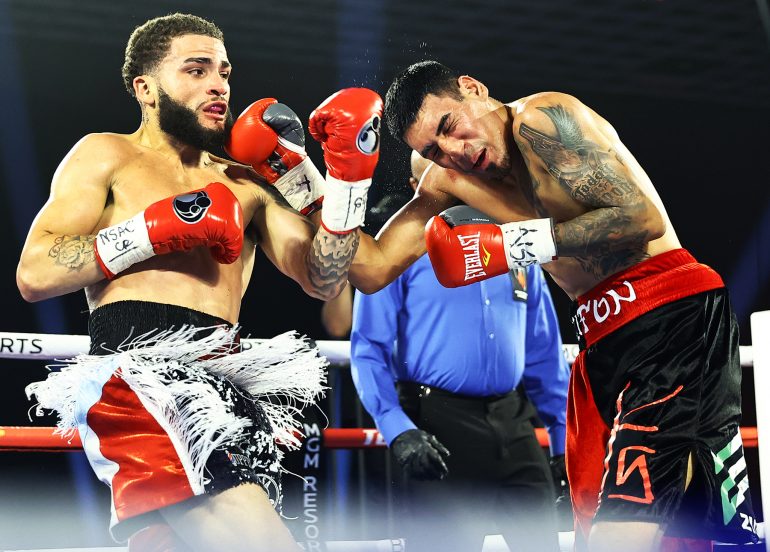 Junior welterweight prospect Josue Vargas scored a lopsided unanimous decision win over Salvador Briceno tonight in Las Vegas. The scorecards were a formality after ten one-sided rounds, with two 100-90 scores and one 99-91 tally from the official judges.

It was an emotional night for Vargas, who improved to 17-1 (9 KOs). For the first time in his career, he entered the ring without his father at his side.

“It was a little bit tough because I’m always used to having my dad in the corner,” he said after the fight. “We have that chemistry together; he gets something out of me that nobody else can.”

Before the fight it was discovered that Josue’s father and trainer Elario Vargas would not be in his corner. Elario reportedly broke Top Rank’s COVID-19 “Bubble” protocol last night when he left the secured twelfth floor of the fight hotel and entered the casino floor with no mask on. Raul Rivas, who has worked with Tevin Farmer and other notable fighters, stepped in for Elario as chief second.

“Josue’s performance was outstanding,” said Rivas after the bout. “He listens, he’s a really smart guy.”

It was target practice throughout for Vargas. From the opening round, the southpaw couldn’t miss with right hooks and uppercuts on the inside. The only real drama occurred in the sixth round when an accidental head butt opened a cut over both fighters’ eyes. After the fight it was revealed that in the fourth round, two of Vargas’ teeth (veneers) were knocked out.

Vargas, a native of Puerto Rico who now fights out of the Bronx, more than doubled Briceno in overall punches landed. He connected on 187 out of 601 total punches (31%), to just 77 of 428 (18%) for the Mexican fighter Briceno. Vargas also landed 33 body shots to Briceno’s 10 and landed over 40% of his power punches.