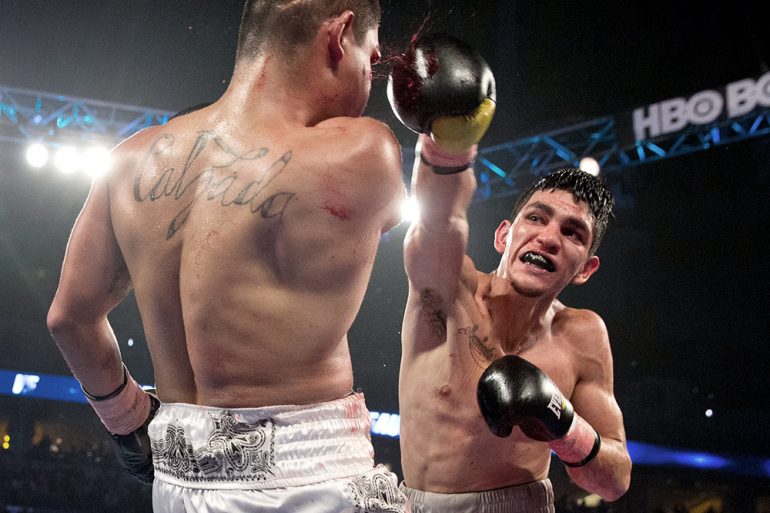 Alex Saucedo makes for fun fights and has power in both hands, but it took a loss in a world title bout for him to realize that he needed more in his arsenal in order to seriously challenge the best fighters at 140 pounds.

Saucedo believes a rest after the only loss of his career and a new trainer will lead him back to a world title opportunity. But first he must get past Sonny Fredrickson on Tuesday night at the MGM Grand Conference Center in Las Vegas, Nevada. The 10-round bout will air live on ESPN and ESPN Deportes (8 p.m. ET/ 5 p.m. PT).

Saucedo dropped Hooker early but was unable to finish him. As the bout progressed, the defending titleholder broke his man down, dropping Saucedo in the seventh round before securing the stoppage later in the session.

“When I looked at the tape, I just kept making the same mistakes during the fight,” Saucedo told The Ring. “I just needed a change of trainer. I respect Abel (Sanchez), but I needed more than someone telling me, ‘Go in there and throw a lot of punches.’ I had to lose a lot of weight in previous camps. I learned from that and had a nine-week camp [for this fight], where I split time between Southern California and Oklahoma City, sparring 130 rounds.”

Saucedo (29-1, 19 knockouts), who is promoted by Top Rank, is now working with Pedro Neme, an Argentine-born trainer who is based out of Churchill Gym in the Los Angeles suburb of Santa Monica.

After the Hooker fight, Saucedo spent time away from the ring to recharge and reflect on his career. The 26-year-old returned to the ring on November 2 in Carson, California, stopping Rod Salka in the opening round.

“I know it was a knockout in the first round, but I felt really good with the work we did in the training camp before the fight,” said Saucedo, who is managed by Sam Katkovski. “I learned a lot from my trainer. Everything went really well during camp.”

Saucedo will square off against a modest opponent in Fredrickson. A native of Toledo, Ohio, Fredrickson (21-2, 14 KOs) lost by majority-decision to Samuel Teah in his last bout on November 14 in Washington, D.C., snapping a three-fight winning streak.

Despite Fredrickson having a height and reach advantage, Saucedo believes he has the intelligence and game plan to come out victorious.

“I know he is the type of fighter who likes to stand and trade in the center of the ring,” offered Saucedo. “He’s a lengthy fighter and he knows how to use his reach a lot. That’s a good thing for us because I believe we can time him once he throws that jab, but he also keeps that right hand down. We really did our homework to prepare for Fredrickson.”

Saucedo hopes for a rematch against Hooker, but that might not take place anytime soon due to the scales. Hooker was scheduled to face former titleholder Regis Prograis at a catchweight of 143 pounds, although that fight has now fallen through.

“I really want that rematch with Hooker, but it looks like he is moving up to welterweight,” Saucedo said. “I have my plans set for 140 pounds, but I would ask for a rematch if and when I decide to move up to 147 pounds.”

Saucedo, who is not ranked by any of boxing’s sanctioning bodies, could make a statement with a solid win over Fredrickson.

“I’ve put in the work in the gym and I feel that I can perform just like a champion. I want to show people what Alex Saucedo can do. I’m willing to fight anyone and that includes the world champions.”