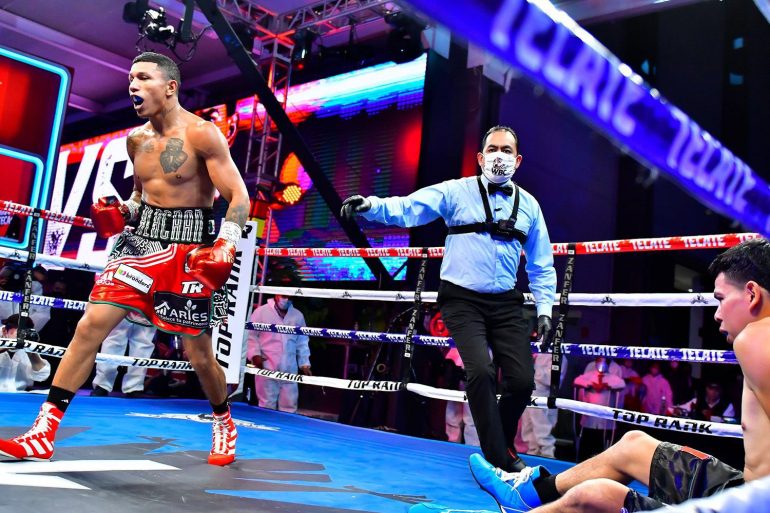 Miguel Berchelt did what he was supposed to do vs. Eleazar Valenzuela. Oscar Valdez won't be as easy. Photo from Zanfer Promotions
27
Jun
by Francisco Salazar

WBC junior lightweight titleholder Miguel Berchelt battered game Eleazar Valenzuela before stopping him in round 6 of a non-title fight Saturday night at the TV Azteca Studios in Mexico City.

Saturday was a stay-busy fight for Berchelt, who last fought on November 2, dropping Jason Sosa multiple times before knocking him in round 4. The victory over Sosa was Berchelt’s sixth defense of the WBC title.

Before the end of the opening round, Valenzuela was dropped by a counter left hook to the head by Berchelt. Valenzuela beat the count and was saved from further punishment as the bell sounded to end the round.

Berchelt was very sharp throughout the fight, throwing and landing two or three-punch combinations, forcing Valenzuela to cover up. Despite the barrage of punches Berchelt was landing, Valenzuela mostly absorbed the punches, fighting back in spurts as he stood in the pocket with Berchelt.

About a minute into round 6, Berchelt stunned Valenzuela with a left-right combination to the head. The impact sent Valenzuela back against the ropes, where Berchelt landed another three punches before referee Cesar Calderon Varela to stop the fight at 1:13.

“I felt great, but the altitude Mexico City hit me a little bit,” said Berchelt after the fight. “It is not easy to fight in Mexico City, but thank God we got the victory. Eleazar is a tough fighter. He endured everything I threw at him. He gained my respect. My experience as world champion pushed me forward.”

There is talk of Berchelt facing mandatory challenger Oscar Valdez later this year in an all-Mexico clash of strong boxer-punchers. There is also the possibility Berchelt could unify against WBO titleholder Jamel Herring or even WBO featherweight titleholder Shakur Stevenson.

“Now what follows is the expected fight against Oscar Valdez,” said Berchelt, who is co-promoted by Top Rank and Zanfer Promotions. “Every fan wants to see that fight and we are ready for that war.”