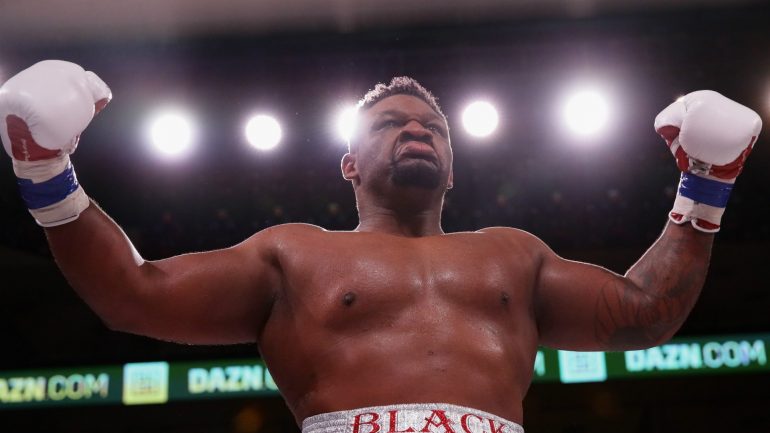 Heavyweight Jarrell “Big Baby” Miller has failed yet another drug test and cost himself another fight.

Miller tested positive for the banned substance GW1516 in a test conducted by the Voluntary Anti-Doping Association (VADA) and his fight with Jerry Forrest was canceled on Saturday, which was first reported by Mike Coppinger of The Athletic.

Miller and Forrest were scheduled to square off in a 10-round bout set to headline the Top Rank Boxing on ESPN card on July 9 at the MGM Grand in Las Vegas in what was supposed to be Miller’s first fight since signing a co-promotional deal with Top Rank in January. Forrest promoter Lou DiBella confirmed the positive test as did Top Rank.

“We are aware of the situation, and (Miller) will be placed on temporary suspension on Monday morning by the Nevada State Athletic Commission,” Top Rank spokesman Evan Korn told The Ring.

The 6-foot-4, 300-pound Miller (23-0-1, 20 KOs), 31, of Brooklyn, New York, has not fought since he knocked out then-undefeated Bogdan Dinu in the fourth round on November 17, 2018, in Mulvane, Kansas. After that fight he was tapped to challenge England’s Anthony Joshua for his three world title belts last June 1, when Joshua would make his American debut at Madison Square Garden in New York.

However, Miller was dropped from the fight about month beforehand because the New York State Athletic Commission refused to issue him a boxing license after he failed four VADA-administered random drug tests for three different banned substances — GW1516, human growth hormone and EPO — over the span of a few days.

Andy Ruiz Jr. famously took Miller’s place on short notice and made history with a monumental upset victory, as he knocked Joshua out in the seventh round to win the belts before losing them via a one-sided decision in their rematch on December 7.

“He should be banned from boxing,” DiBella told The Ring after being informed of Miller’s latest positive test on Saturday. “Obviously, he needs to get some help. He needs a psychological evaluation. Look, I’ve known Jarrell since he was a kid and I like him but he shouldn’t be in boxing. This is not normal. I’m more amazed at the moment than I am angry. This is sad for the sport. He forced a heavyweight title fight at Madison Square Garden to be canceled because he tested positive for everything under the sun and no commission required him to enter into testing until just a few weeks ago. He wasn’t in a year-round program; he wasn’t in the WBC’s (Clean Boxing Program). And now this.”

Top Rank vice president Carl Moretti told The Ring that there is a chance that Forrest (26-3, 20 KOs), 32, of Lafayette, Louisiana, will remain in the July 9 main event and face former world title challenger Carlos Takam (38-5-1, 28 KOs), 39, of France, who is co-promoted by Top Rank and Joe DeGuardia of Star Boxing.

“We’re trying to do that fight right now,” Moretti said.

Takam has won three fights in a row since back-to-back stoppage losses to Dereck Chisora in July 2018 and Joshua in an October 2017 world title challenge.

“We would probably take the fight, but I need to speak to Jerry,” DiBella said. “It’s a much different type of fight than one against Miller, but I don’t think Jerry would turn down the opportunity.”

Miller was initially supposed to return against Takam on February 22 on the pay-per-view undercard of the heavyweight world championship rematch between Tyson Fury and Deontay Wilder, but because it took so long for the co-promotional deal to be signed, it was too late to add Miller to the show.

After the failed tests related to the Joshua fight Miller initially denied knowingly taking any banned substances. But he later recanted and acknowledged taking them in a video he posted to social media.

“This is your boy ‘Big Baby’ Miller here,” an emotional Miller said at the time. “A lot can be said right now. I gonna get straight to the point. I messed up. I messed up. I made a bad call. A lot of ways to handle a situation, I handled it wrongly and I’m paying the price for it. Missed out on a big opportunity and I’m hurtin’ on the inside. My heart is bleeding right now. I hurt my family, my friends, my team, my supporters. But I’m gonna own up to it. I’m gonna deal with it, I’m gonna correct it, and I’m gonna come back better.

“I’m humbled by the experience. I understand how to handle certain things. I’m gonna leave it at that. I love you guys and I appreciate you guys out there, and as fighters we go through a lot and I don’t want to make it a bad name for ourselves. It’s time to do right and get right. So I thank you guys.”

Getting dumped from the fight with Joshua cost Miller a career-high purse of $4.875 million. He was also due to earn additional money from a percentage of the pay-per-view profits from the fight on Sky Sports Box Office in the United Kingdom. In addition, Miller lost out on at least another $3 million because his deal with U.S. broadcaster DAZN for the Joshua fight called for two $1.5 million comeback fights in the event of a loss to Joshua. The biggest purse of Miller’s career was a little over $500,000 for the win over Dinu.

Miller was never suspended by any commission last year and then Top Rank signed him to co-promote him with Dmitriy Salita and Greg Cohen, who have been with him for years. Miller was recently licensed by the Nevada commission for the July 9 date, though the commission ordered enhanced testing ahead of the fight, which is what caught him.

Miller also failed drug test in 2014 when he was participating in Glory kickboxing. Then he tested positive in a urine sample for the banned substance methylhexaneamine in connection with a decision loss to Mirko Cro Cop. The California State Athletic Commission suspended Miller for nine months and fined him $2,500.