Kim Clavel to return to action on July 21 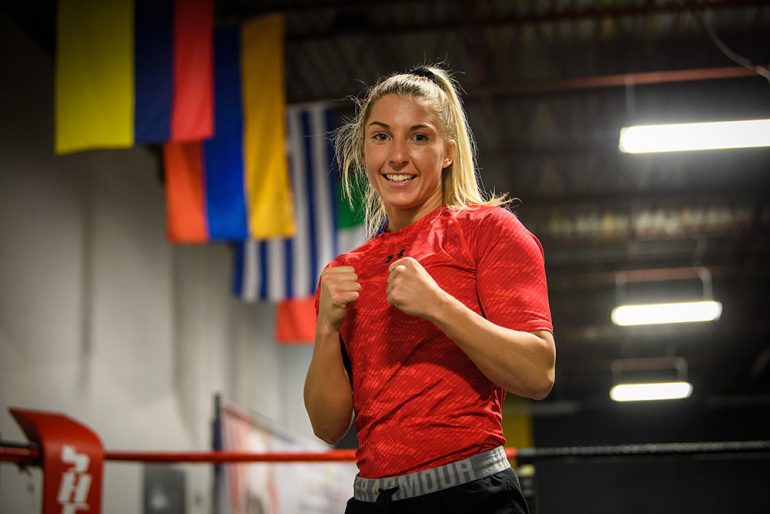 The eight-round bout, against an opponent to be determined, will take place at the MGM Grand Conference Center, in Las Vegas, Nevada, and will air live on ESPN and ESPN Deportes (8 p.m. ET/ 5 p.m. PT).

“I am grateful to Groupe Yvon Michel (GYM), Top Rank, and ESPN for this opportunity, which allows me to make my United States debut on a major ESPN-televised card in Las Vegas,” Clavel said. “This is significant for my boxing career and my training team and I are already counting down the days.”

Clavel (11-0, 2 knockouts) most recently fought on December 7, defeating Esmeralda Gaona Sagahon over 10 one-sided rounds. Clavel was scheduled to face Mexico’s Esmeralda Moreno in the main event on March 21 but the fight card was cancelled due to the COVID-19 pandemic.

After the Moreno fight was cancelled, Clavel put her boxing career on hold, working as an overnight nurse at retirement and elderly care centers in her hometown of Montreal, Canada. Clavel worked with patients on the frontline all while staying in shape with a modified routine of jumping rope, running and shadowboxing on her days off.

Clavel did credit boxing as a release from the emotional and mental toll from her nursing job.

The 29-year-old was recently recognized for her dedication at her job as she was awarded the 2020 Pat Tillman Award at the ESPYs, which took place on June 21.

“When Kim Clavel’s boxing career was paused due to the pandemic, she didn’t hesitate to go head-to-head against this new opponent,” said Yvon Michel, Clavel’s promoter. “It is with the same courage and enthusiasm that she will step into the ring on July 21 to pursue her goal of becoming world champion and continuing to inspire people. Thank you to Top Rank and ESPN for offering Kim this unique opportunity to showcase her world-class talent.”