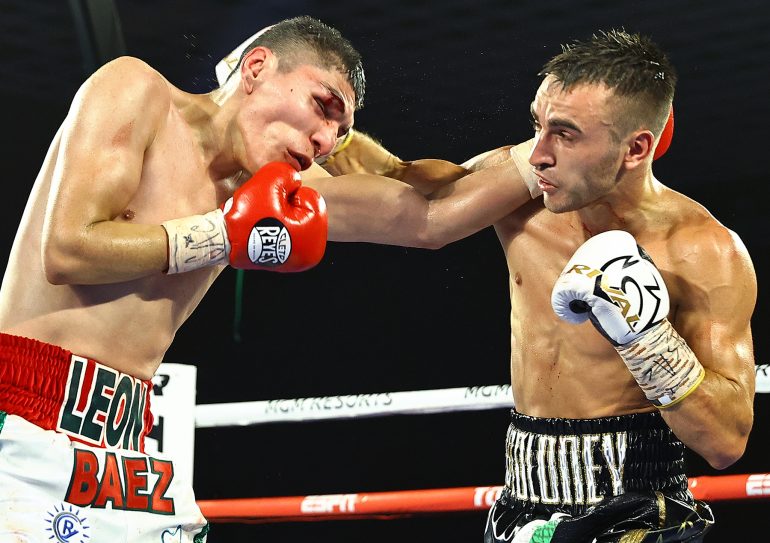 Jason Moloney was fighting a whole range of emotions. When the bell rang, he took them out on Leonardo Baez.

Two nights after watching his twin brother Andrew lose his undefeated record in devastating fashion, Moloney busted up and stopped Baez in seven rounds Thursday evening at The Bubble inside the MGM Grand Conference Center in Las Vegas.

Baez’s corner stopped the fight after Baez claimed that he was unable to breathe after taking serious punishment to the body throughout their contest.

“I wanted this so bad,” Moloney said. “I’m so driven and so dedicated. This was the biggest opportunity of my career.”

In the opening frame, Baez put his three-inch reach advantage to good use behind a long jab. But Moloney was also countering well on the inside and blocking a lot of shots.

It was anybody’s game in round two with both fighters trading shots on the inside.

Seven rounds of THIS ?@JasonMoloney1 went to work on the inside from start to finish and it’s stopped, as the Bantamweight contender earns the TKO victory over Leonardo Baez. #MoloneyBaez pic.twitter.com/6xkYPcT3FE

There was a shortage of real estate in round three, but Moloney opened up the range with his power. He consistently beat Baez to the punch and opened up a cut around his right eye.

“I think I sent a big message (to the top fighters at 118-pounds),” Moloney added. “I knew that Leonardo Baez was going to be a really, really tough challenge. He’s an absolute warrior.”

The fourth round was close, but Moloney was landing the harder and more effective punches.

Moloney began to mix in some body work in the fifth round that slowed down Baez significantly. In the sixth, the 29-year-old picked it up a notch and started to lay the hammer on Baez, who had begun to fatigue.

Baez was cut once again in the seventh round, and blood streamed down his face as Moloney continued to fire in his direction. Ultimately, Baez’s corner saw their fighter had been outgunned. With no ammo left to resist a further assault, the fight was stopped.

Moloney (22-1, 17 KOs), 29, of Australia, has won four in a row and all by knockout since dropping a split decision to then-unbeaten former title challenger Emmanuel Rodriguez in October 2018.

The 24-year-old Baez (18-3, 9 KO’s), of Mexico, saw a six-bout win streak evaporate. He was coming off his most impressive run to date, which included an upset win over former title challenger Moises Flores in February and a unanimous decision against 2016 Olympian Alberto Melian.