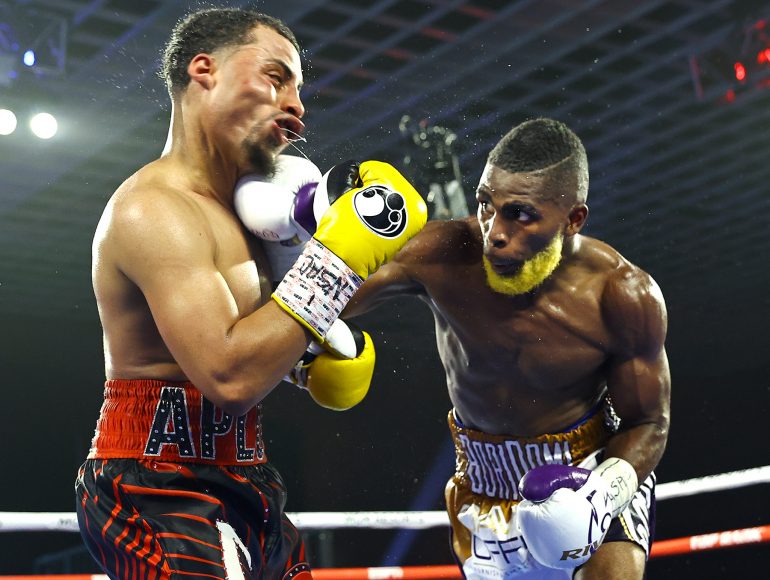 Abraham Nova remained unbeaten, but Avery Sparrow made it a difficult task.

Nova came on strong during the second half of their 10-round affair to win a unanimous decision over Sparrow.

The fight served as the chief support to the bantamweight contest featuring Australia’s Jason Moloney (21-1, 17KOs) and Mexicali’s Leonardo Baez (19-2-2, 7 KOs) in the Top Rank on ESPN card at The Bubble inside MGM Grand in Las Vegas.

Judge Max DeLuca scored it a mind-boggling 99-91 for Nova, but Lisa Giampa and Patricia Morse Jarman had more reasonable scores of 97-93 and 96-94 for Nova, who went the distance for the first time in five fights dating back to December 2018.

It was a tactical bout throughout. Nova was clearly the stronger fighter and came forward looking to land hard shots, but Sparrow’s awkward style proved to be a puzzle.

Sparrow, who took the fight on three weeks’ notice was coming off a 15-month layoff, but didn’t show any signs of rust early in the contest, and used his jab to keep Nova at a distance in the opening frame.

In the second round, Nova picked up the pace and connected with a left hook to the midsection of Sparrow.

The action slowed in the third round as both fighters went back continued their tactical chess match. Nova landed the best punch of the round with a left hook to the head.

Sparrow continued to come forward, but his grunts had more of an impact than his punches, which hardly landed. Meanwhile, Nova kept looking for openings. The slow pace marched into the fifth round until Nova decided it was time to let his hands go.

Nova appeared to hurt Sparrow in the eighth round when he nailed him with a big right hand over the top of his guard. Sparrow wisely clinched to avoid going down. However, he ended up falling to the canvas and subsequently spat out his mouthpiece to buy more time.

Nova (19-0, 14 knockouts), 26, a Puerto Rico native based in Albany, New York, landed a left hook late in the ninth round as the pace and tempo returned to its subdued form.

Nova cruised to the victory. He connected with a slew of jabs, left hooks, and right hands. Sparrow (10-2, 3 KOs), 26, of Philadelphia never backed down, but he also couldn’t manage to land anything of significance throughout the contest.