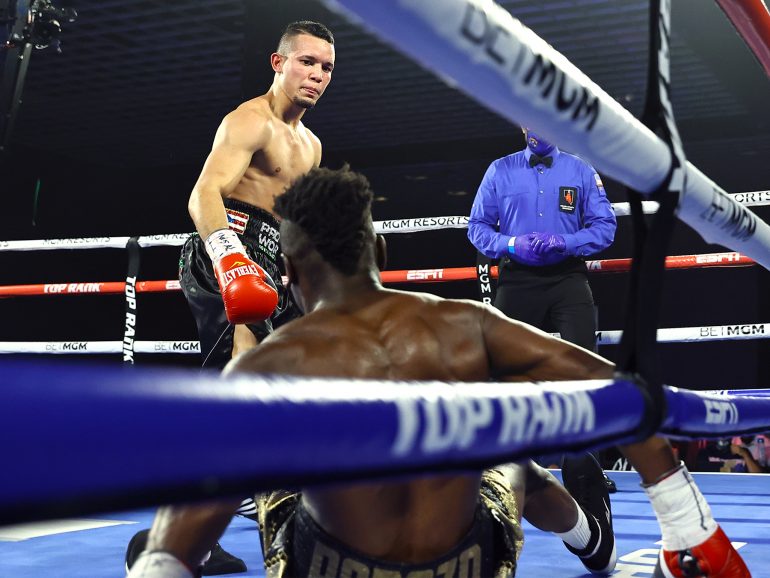 Orlando Gonzalez-Ruiz floored Luis Porozo twice, once in the second round, and once more in the seventh round en route to a unanimous decision Thursday night at The Bubble inside the MGM Grand in Las Vegas.

Gonzalez-Ruiz not only won the fight, but he also made an unnamed gambler, who wagered $192,001.30 on him to win, even richer.

The gambler won back $14,763.33 on a wager initially placed at MGM Grand’s sports book.

From the onset, Gonzalez-Ruiz was composed, utilizing his jab and landing left hands.

Gonzalez-Ruiz (15-0, 10 knockouts), a 24-year-old southpaw from Aguadilla, Puerto Rico, knocked down Porozo with a short, but effective left hand to close the second round.

In the third round, Porozo went on the attack. However, his offensive assault was stifled by Gonzalez-Ruiz, who maintained a tight guard and blocked a majority of his shots.

Gonzalez-Ruiz kept Porozo thinking in round five as he mixed in a slew of uppercuts, which left his adversary baffled.

The bout also had its fair share of low blows, the first which was landed in the fifth by Gonzalez-Ruiz, which allowed Porozo time to buy more energy.

Gonzalez-Ruiz was warned a second time for a low blow in the sixth round. However, replay confirmed that the punch was above the beltline.

Another low blow was called in the seventh frame. However, this time, the shot landed by Gonzalez-Ruiz was clearly low. But this time, he capitalized on a fatigued Porozo and floored him for the second time with body shot after clipping him with a sharp left uppercut and a follow-up right hook.

Gonzalez-Ruiz picked up his second victory of 2020, while Porozo (5-3, 8 KOs), 29, suffered his third defeat in his last four contests.