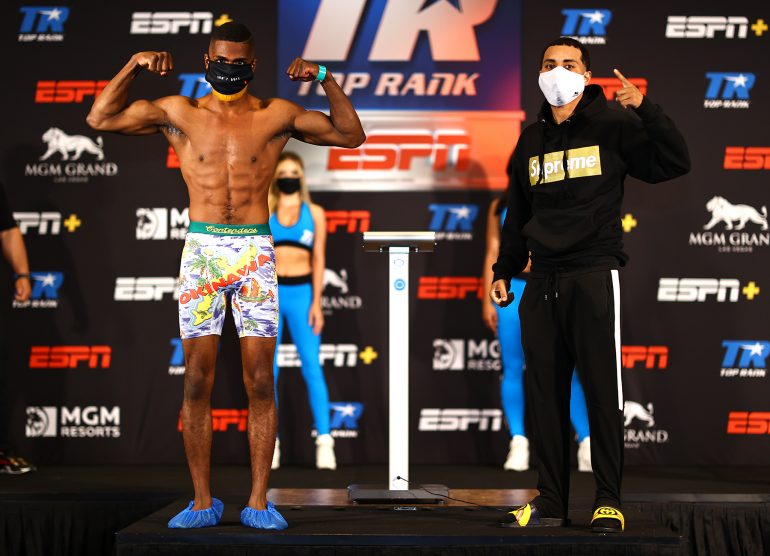 Undefeated junior lightweight Abraham Nova believes he will be too much to handle for Avery Sparrow.

Nova (18-0, 14 knockouts), 26, a Puerto Rico native based in Albany, N.Y. , takes on Avery Sparrow in a scheduled 10-round affair in the chief support bout of a Top Rank on ESPN card tonight at The Bubble at MGM Grand in Las Vegas.

But Nova told The Ring that Sparrow is no walk in the park.

“Sparrow is a solid boxer,” Nova stated. “I’ve seen him spar (IBF lightweight titlist) Teofimo Lopez, and he did very well, especially considering that Lopez is a beast with great power and speed.”

Both Nova and Sparrow made weight for their bout Wednesday, which is taking place at a contract weight of 132 pounds on the undercard of the bantamweight fight between Australian contender Jason Moloney (20-1, 17 KOs) and former junior featherweight title challenger Oscar Negrete (19-2-2, 7 KOs).

While Nova has much praise for his opponent, he cautions that “styles make fights.”

“Every fighter comes with a different style, and I feel like I bring something different to the table in terms of my skillset, my power, and the determination to get the victory.”

Whether the fight goes the distance or if a knockout is scored, Nova expects to have his hand raised victoriously at the end of the battle.

“Either way, I’m going to win the fight. I am not necessarily looking for the knockout, but trust me, if the opportunity arises, I’m getting Sparrow out of there.”

Sparrow (10-1, 3 KOs), of Philadelphia, has not fought since coming off a 15-month layoff to win a 10-round majority decision over fellow Philly rival Hank Lundy in March 2019.

The 26-year-old was supposed to fight rising lightweight star Ryan Garcia last Sept. 14 on a Golden Boy card on DAZN Dignity Health Sports Park in Carson, California. However, the bout was canceled the day before when Sparrow was arrested by U.S. Marshals in a nearby Target parking lot due to an outstanding warrant regarding a gun charge in Philadelphia.

Nova, who started boxing at the age of 12 and fought over 178 amateur fights, added that his consistency will be a critical factor against Sparrow.

“As I said before, I am determined, and I am dedicated,” he continued. “I am in great shape, and I’m going to win.”