His guest on this episode is 2020 International Boxing Hall Of Fame Inductee, minor league baseball team owner, film producer, and promoter extraordinaire – Lou DiBella. They discussed Lou’s feelings on not being able to enjoy his induction into the IBHOF this year due to the COVID shutdown.

They got into how Top Rank is managing the implementation of their COVID protocols and still putting on shows and also how Lou’s fighter Mikkel LesPierre’s COVID situation went down. They further discussed the financial burden of COVID testing on smaller promoters and club shows.

Additionally, they spoke about what’s next for other members of the DiBella Entertainment roster including Regis Prograis, Amanda Serrano, Ivan Baranchyk, Jerry Forrest, Tevin Farmer, Charles Conwell, and Bakhodir Jalalov.

On Lou’s thoughts on the IBHOF canceling the induction ceremonies this year (the year he got in) due to COVID:

“I was really looking forward to that weekend from the second I was told that I got in. It was like my second instinct after incredible gratitude. My second instinct is this is going to be a great party and I want to get all the people I care about there. So I had like over a hundred people that were coming to Canastota. So, I mean, it’s just a bummer a little bit. But I guess, the recognition of getting into the Hall of Fame and what that says about my career and the fact that that gives me something of a legacy in the sport, no matter what happens from here out, that’s really great stuff. So the fact that we weren’t able to have the party this year or the summer, or have our own moment, you know, it’s a bummer. But look at all the people that missed their weddings and graduations and everything else. All the college graduates this year that didn’t have a senior week and all the high school kids that didn’t have proms or whatever. 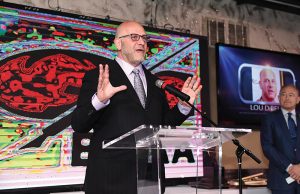 So, hopefully, God willing we’re back to normal by June of 2021. And we’re combining the two classes and I think it could be a stellar class next year. And maybe it could be like a giant boxing party and I’m looking forward to that. But getting into the Hall of Fame, when I was a kid at six, seven years old, baseball and boxing were the sports I first attached to. And my grandfathers turned me on to boxing and my dad liked boxing. And, that was just always something to me. Muhammad. Ali was my hero and then later in life, he became someone like a friend, like someone I knew. I mean, Hagler, Hearns, Leonard, Duran these guys became my friends that I worked with all of them.

And, the history of boxing from 1989 to 2020, I think I’ve been a significant part of it. And it’s been a crazy ride I’ve had. I mean, from 11 years at HBO and having the ascension I had there and getting to run programming. Having Seth (Abraham) give me as much freedom and leeway as he did. Maybe we wound up breaking up not on the best of terms but now we’re friends again. But he gave me a tremendous opportunity to go to HBO and to change the nature of boxing programming at HBO. And, there was an incredible crew of people there back then. (Mark) Taffet doing pay per view with me.  And then you had Ross Greenberg’s production unit with one of the best broadcast teams in the history of boxing.

It was just a great ride there. And then I told someone to go fuck themselves. And my career arc changed. But I’m not going to complain because I actually think it was best for everyone involved. Maybe not best for boxing. I hate to say that, but I think it was. It may have been best for me that I left, cause I don’t think I would’ve survived the last 20 years if I didn’t have other things I was doing with some of my time. Having the production company and messing around and getting the opportunity from Sly Stallone and being in that Rocky movie. Then, producing a bunch of films and then getting the involvement in the baseball teams and then getting to the point where I was managing partner of two minor league baseball teams.

So I got to do a lot of other stuff, even though boxing was, in effect, my bread and butter and where I spent most of my time. But even though I guess I didn’t have much free time, the other stuff allowed me to balance out boxing. I love boxing. I will always love boxing. It’s in my blood and it’s in my DNA and I love the theater of it and the poetry of it. And yet it’s dark man, but the world is fucking dark. Let me look at the fucking White House. And the world is dark. So boxing’s dark. But are we dishonest? I mean, is baseball better than boxing? Fuck no.”

On whether smaller promoters than Top Rank can handle the cost of the testing it takes to safely do shows in the time of COVID:

“You’re not going to have local shows. You’re not going to likely have ShoBox, for example, unless Showtime increases the budget to make up for the lack of a gate. Because on smaller budget shows, the gate is a much more important part of the equation actually. You can’t do Broadway Boxing on UFC (Fight Pass). I can’t do those shows domestic US. I mean, like there’s no way. Because my gate and my live gate sponsorship are a lot of my revenue. Yes, the streaming or TV money on the smaller shows helps, but it’s one component and the economics don’t work unless somebody makes up for that money. So no one can afford to do shows to lose money.

You gotta pay your overhead. You can’t afford to lose money. You need to bring in revenue to pay your expenses. So the guys that are going to be doing shows right now, I’m going to wonder why. Maybe it’s ego stuff. Some desperados are. But, I don’t see a lot of small local shows happening in a responsible manner. Let me qualify that – in a responsible manner. You know what I mean? Cause if you want to go into a jurisdiction where you don’t have to test anybody and all you need is an eye test and an HIV test then good luck to you. But I don’t want my fighter going near your show.”

On the status of the Regis Prograis-Maurice Hooker fight:

“During this pandemic, there’s been no negotiation really over Regis Prograis in the following sense, Kurt. We had a deal to fight Maurice Hooker. Okay. Now, Eddie (Hearn) came back and he said, I know Regis wants to fight and Maurice wants to fight so I can cut the money and give a date by the end of the summer. And from our standpoint, we were all ears. So we had been hearing that there were some issues with the weight with Hooker. And then we weren’t going to get into a negotiation against ourselves because we had a 50-50 situation with Hooker and the deal we already had. So Eddie (said the) cut that we were going to take was going to be commensurate with whatever Hooker took. So I sorta said to Eddie, you can go try to get a deal done with Hooker. And then Hooker came back and said, I can’t make 143. I need two more pounds. This is after everybody signed contracts. You know what I mean?

And then Regis said, I don’t want to go up to that weight because I want to come back down to (1)40. I want to fight Ramirez and Josh Taylor. And I want to come back down to (1)40. So I don’t want to go that close to (1)47. I’m not doing that. And then, Hooker never agreed on the money, which I get. I mean, that it’d be a negotiation, but right now Regis isn’t coming down to (1)45. Regis isn’t coming down, with a pay cut, to fight at 145 pounds because the guy just decided, fuck it. The catchweight in the first place was to help Hooker. If Hooker didn’t want the fight, he shouldn’t have signed the contract for the fight. But I mean, Regis doesn’t need the 143 catchweight, Hooker’s getting bigger. And Hooker was like, yeah, I’m having problems with (1)40. So we agreed to (1)43. But then on short notice to come back and say, no, well, we can’t make (1)43, so you’ve got to come to (1)45. And by the way, you’ve got to take the same pay cut we’re taking and we won’t come down to below 145 – and that’s why the fights not happening.”

On the fact that Jarrell “Big Baby” Miller wasn’t disciplined by New York State for his PED use:

“What do you think about the fact that after the heavyweight championship gets canceled, the fight at the Garden falls out, Andy Ruiz comes in and upsets the apple cart – and the division, the whole universe of heavyweight boxing, changes because Jarrell tests positive for a bunch of stuff? How do you feel about no one ever telling Jarrell he had to get tested over the last year? And by the way, I like Jarrell personally. So I’m not going to shit all over him. And I’m also going to say this. If a guy isn’t told that he has to test, and it looks like he can get away with not being tested over the course of the time. I mean, is it the system or is it him or is it both?