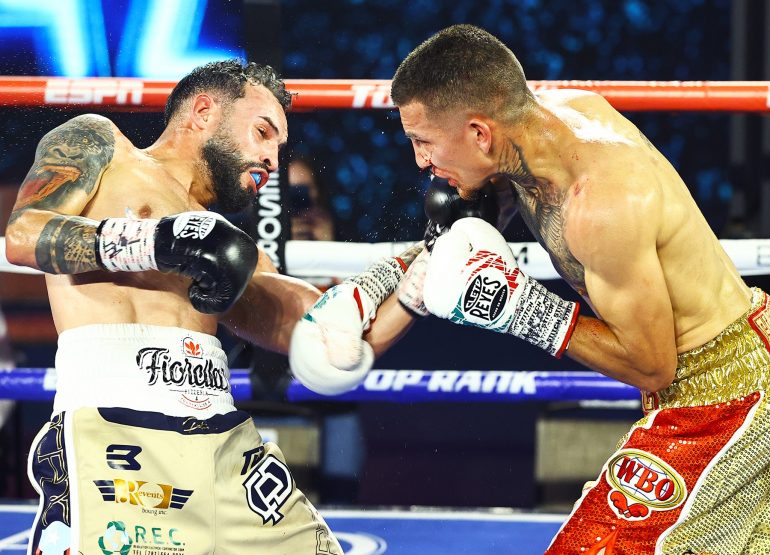 The clash between Diaz and Sanchez was a crossroads bout between former world title challengers. Diaz, who resides in Barranquitas, Puerto Rico, suffered his first loss as a pro when he lost to Masayuki Ito for a vacant junior lightweight world title in July 2018. His other defeat came at the hands of Shakur Stevenson on April 20 of last year.

Sanchez challenged then-WBO featherweight titleholder Oscar Valdez on June 8 of last year, losing by unanimous decision. He rebounded from the loss in his last bout on October 26 by knocking out Dos Santos in round 4.

From the opening bell, Diaz asserted himself by putting Sanchez on the defensive. As the bout progressed, Diaz landed lead or counter right hands to the head of Sanchez, whose lack of head movement made it easy for him to be hit during the first half of the fight.

During a break in the action in round 10, Diaz yelled to a Top Rank representative about putting together a fight against Jessie Magdaleno.

“I can fight at featherweight, or I can make 122 pounds,” said Diaz, who is trained by Freddie Roach. “I’m ready for a big fight in either weight division. I am a completely different and improved fighter from the one who fought Shakur Stevenson last year.”

“I worked on my power in the gym. My coaches, Nelson Rodriguez and Freddie Roach, got me ready for tonight. I’m ready for a big fight now. This is the new Christopher Diaz.”

Sanchez, who resides in Albuquerque, New Mexico, drops to 15-2, 8 KOs.

Contreras found success landing sharp left-right combinations, beating Vargas to the punch during the first half of the fight. Sensing he was down late in the fight, Vargas increased his punch output, but had dug himself a hole from losing the earlier rounds.

Vargas, who resides in Milwaukee, Wisconsin, drops to 5-1, 5 KOs.

In the opening bout of the ESPN telecast, heavyweight Helaman Olguin of South Jordan, Utah defeated previously-unbeaten Adam Stewart by majority-decision. One judge scored the bout 57-57, while the other two judges scored the bout 58-56 for Olguin (8-3, 3 KOs), who has now won his last seven bouts.