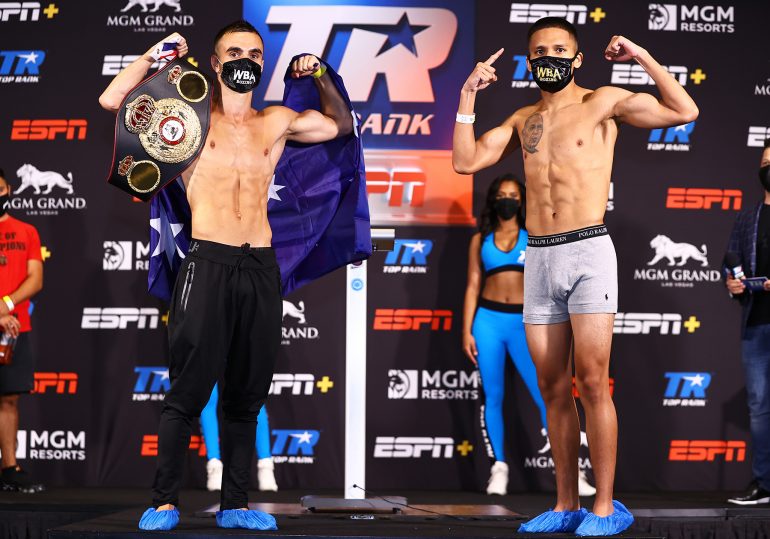 Both Andrew Moloney and Joshua Franco made weight for their 12-round bout Tuesday night at the MGM Grand Conference Center in Las Vegas, Nevada. The fight will air live on ESPN (8 p.m. ET/ 5 p.m. PT).

At Monday’s weigh-in, Moloney weighed in at 114.7 pounds. Franco had to strip down to make the 115-pound limit.

The clash between Moloney and Franco is a match-up of fighters ranked in the top-10 by The Ring. Moloney is ranked No. 6 while Franco is four spots below at No. 10.

Moloney (21-0, 14 knockouts), who resides in Kingscliff, Australia, will be making his United States debut Tuesday night. The Franco fight will mark the third of a multi-year deal with Top Rank.

In his last bout on November 15, Moloney won by knockout after Elton Dharry was not allowed to continue after round 8 due to a cut above his eye that was caused by a punch.

Moloney and his twin brother Jason Moloney are managed by Tony Tolj. Jason Moloney will fight Leonardo Baez of Mexico this Thursday night on ESPN.

Franco (16-1-2, 8 KOs), who trains out of Riverside, California, last fought on January 11, stopping Mexico’s Jose Alejandro Burgos in round 9. The fight took place in Franco’s hometown of San Antonio, Texas.

Franco, who is trained by Robert Garcia, is unbeaten in his last five bouts since suffering his only loss of his career at the hands of Argentina’s Lucas Fernandez Leone of Argentina in March 2018. He recently fought a trilogy against former world title challenger Oscar Negrete, winning once and fighting to two split-decision draws.

In the co-feature, which will open the ESPN telecast, featherweight Christopher Diaz will face Jason Sanchez in a 10-round bout between former world title challengers.