Joshua Franco gets his big shot against Andrew Moloney 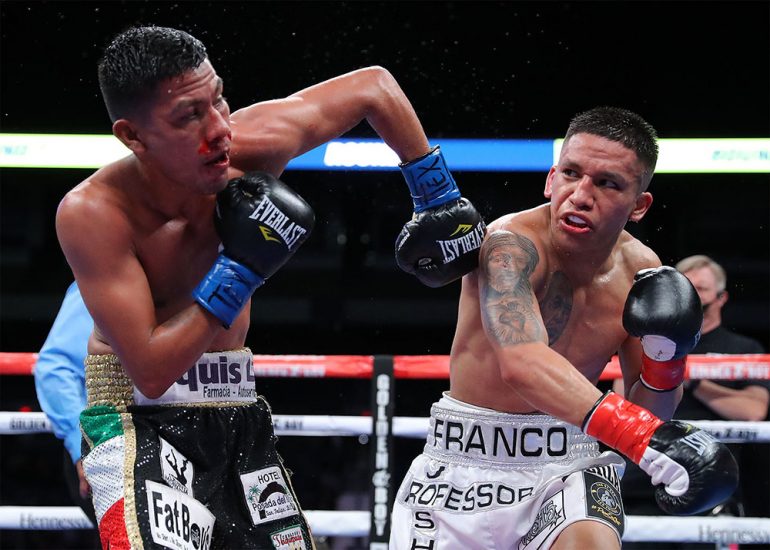 Joshua Franco (16-1, 8 knockouts), of San Antonio, would like to be added into the mix. The 24-year-old fights for his first belt on June 23rd when he takes on unbeaten Andrew Moloney (21-0, 14 KOs), of Australia, at MGM Grand in Las Vegas in the main event of a Top Rank on ESPN card.

“I’m gonna represent Golden Boy Promotions very well on June 23rd when I take on Andrew Moloney,” Franco told The Ring. “This will be the return of Golden Boy Boxing.”

Moloney, 29, has won his last four bouts by knockout, including a victory against Selemani Bangaiza last June when the Tanzanian fighter spat out his mouthpiece and refused to fight after taking two rounds of punishment.

The Moloney fight will mark Franco’s first 12-round affair. Since suffering a ninth-round stoppage at the hands of Lucas Emanuel Fernandez Leone in March 2018, he has fought five times, with three victories, and two draws, both against former title challenger Oscar Negrete. However, in their second bout, Franco came away with a split decision win.

“Those fights with Negrete were the toughest of my career,” Franco said. “Negrete has a great chin. He can take a good shot, and he doesn’t stop coming at you, and he throws a lot of punches.

“I really had to dig deep in those fights. He taught me a hell of a lot in there. He taught me to be more calm and to be more poised. It also taught me mentally that I can go 12 rounds with anyone in my division.”

Unlike most boxers in the world, Franco was able to get a fight prior to the COVID-19 shutdown. On January 11th, he scored a ninth-round TKO over Jose Alejandro Burgos in front of a hometown crowd at the Alamodome.

“In hindsight, I’m really glad I was able to fight before all of that started,” he added.

Franco, who is trained by former 130-pound titlist Robert Garcia, said that he has no problem stepping back into the ring against an undefeated fighter following a short hiatus.

“Of course, I’ve been staying in shape. It doesn’t bother me one bit that I’m facing a tough guy. We’re fighting for a belt, and I have been dreaming for this moment since I was a kid. I can’t wait to get in there.”