From Sugar Ray Robinson to Marcel Cerdan, Lou Pompey knew them all 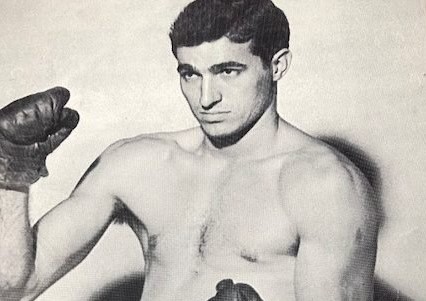 From an outsider’s perspective, the record looks pedestrian. Nothing really leaps out on Lou Pompey’s fight resume—not even a picture. BoxRec.com says Pompey came from Scranton, Pennsylvania, had an 18-10-2 record, with 11 knockouts, and fought as a middleweight between 1943 to 1952.

In the current state of social media, social distancing and analytics, that’s all anyone would know.

What they wouldn’t know is Pompey, who will turn 93 on August 13, was friends with former middleweight world champion and Hall of Famer Marcel Cerdan, once sparred Sugar Ray Robinson, getting the grand sum of $5 a round to try and hit the greatest fighter who ever lived, and he used to be a regular sparring partner for Eugene “Silent” Hairston.

Hairston was one of the top middleweights of the 1950s who was a deaf mute and the reason why boxing commissions began putting red lights on ring posts to signal the end of rounds. 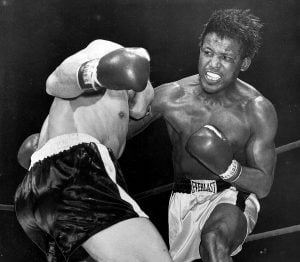 Lou Pompey once sparred with the great Sugar Ray Robinson

He had a fascinating introduction to boxing. As a sophomore in high school, Pompey went with a friend to see a fight at Casino Hall on Adams Avenue in Scranton. When one of the fighters on the card fell out, they enlisted Pompey from the stands to go in and fight (BoxRec: Skip McArthur W 4, Casino Hall, Scranton, PA, Nov. 8, 1943).

He was just 15. What’s more, he won. The promoter almost lost his license when the Pennsylvania State Athletic Commission found out weeks later.

After reffing Pompey’s four-round fight against Joey Brown in September 1948, he became good friends with Cerdan. It was the only fight Cerdan ever officiated, according to BoxRec anals. The great French champion, considered the country’s greatest pro, died tragically over a year later in a plane crash on October 28, 1949.

But what has stayed with Pompey through these years is the time he spent with Robinson, who beat Jose Basora in one round at Scranton Stadium, in Scranton. Pompey worked in Robinson’s camp for that fight, as well as Robinson’s three Philadelphia-area fights against Bobby Lee (Philadelphia Arena, Nov. 15, 1948), Kid Gavilan (Municipal Stadium, July 11, 1949) and Bobo Olson (Philadelphia Convention Hall, Oct. 26, 1950).

“Robinson, I remember, was so tough to hit,” said Pompey, who will be married for 74 years on July 4 and has four grandchildren and four great grandchildren. “I remember one time tell him, ‘Sugar Ray, you open up on me and I’m going to kick where you’re not going to like it.’ Sugar Ray didn’t like to hear that too much, but his manager almost fell on the floor, he was laughing so much.

“I remember sitting there ringside for the (Basora) fight. Sugar Ray beat him so bad that he had blood coming out of his ears. Not his mouth or his nose, his ears. I had a lot of fun boxing. I remember I got $5 a round. The manager would reach into his pocket, and that’s what they would give you.”

“The (Basora) fight was terrible. I remember before the bell rang, Basora something like, ‘If I win, I’m the champ.’ Sugar Ray didn’t like that. I tried jabbing him when we sparred, and he was so fast, I couldn’t hit him.” 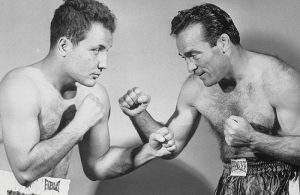 Marcel Cerdan (right) lining up against Jake LaMotta was a friend of Pompey’s and once refed one of his fights.

“Eugene was a very sweet man, but he was a perpetual puncher,” recalled Pompey, whose two older brothers were killed in World War II, one in Anzio and the other in Normandy. “I sparred with Eugene a lot. He was always on TV in the 1950s. He couldn’t hear. He was such a nice man, but I don’t remember him being able to talk.

“He knew how to fight, Jesus. I would we sparred when he was in the Philadelphia area. I didn’t get any money to spar him, though.”

Pompey and his wife, Rose, are being taken care of by his son Andrew, who is named after one of Pompey’s brothers, and his daughter Lois Noto, who’s 70.

Lou’s career was hampered by a bad kidney and had his appendix taken out when he was 19. The injury curtailed Pompey’s ability to train and do road work. He could run maybe six city blocks before tiring.

But one thing he could do was punch.

“That’s the shame of it, he was never able to stay healthy enough to get in shape,” said Andrew, who’s 65. “I don’t mean to brag, but my dad was pretty good. He just couldn’t fight at 100 percent.

“Unfortunately, we’ll never know how far he could have gone.”

But he does have lasting memories of being in the same ring as Sugar Ray Robinson.

After his fighting career, Pompey worked for Capital Records, pressing records in Scranton. But the old-timers always would tell Andrew and Lois that “Your old man hit so hard that he would break both of his hands.”